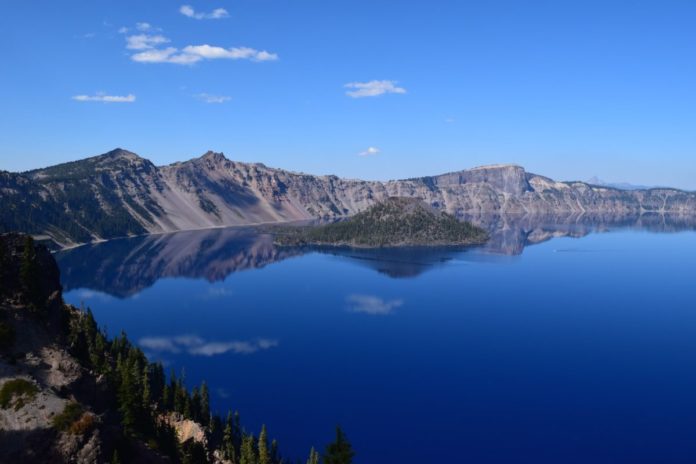 Located in Southern Oregon, Crater Lake National Park was established in 1902, making it the fifth oldest national park in the United States.  At 1,949 feet, Crater Lake is the deepest lake in America and the ninth deepest on the planet.

The lake began as a volcano, Mount Mazama.  Around 5,700 BC. Mount Mazama experienced a tremendous volcanic eruption and collapsed into itself.  The eruption formed a large caldera.  Over the years, it was filled in with snow and rainwater and became the beautiful lake that today is known as Crater Lake.

Crater Lake is one of the most pristine bodies of water on the planet.  The water is so blue and so clear and so beautiful.  It is surrounded by cliffs over 2,000 feet high.  The awe-inspiring gorgeous lake lives up to its nickname of “lake majestic.”

The 33-mile drive around the lake on Rim Road features over 30 scenic overlooks.  Bring your camera and you can take spectacular photos of the breathtakingly beautiful lake and the wild Oregon natural beauty surrounding it.

The Rim Road drive can be a full day of sightseeing.  Be sure to stop at Videa Falls pullout.  The spring fed Falls’ 100 foot drop is spectacular.

Pumice Castle Overlook is unique.  An orange layer of pumice rock has eroded into the shape of a medieval castle.

The Phantom Ship Overlook gives you a view of the Phantom Ship Island in Crater Lake.  Made of erosion resistant lava, it resembles a sailboat and is 400,000 years old.

Hikers love Crater Lake National Park for its almost 100 miles of trails.  The Cleetwood Cove Trail offers fantastic views of the lakes and the mountains in the background.  This one mile long trail takes you down to the lake.  You can enjoy a swim but the water will be cold.  The hike back up to your vehicle will be one mile of switchbacks climbing up over 500 feet.

Mount Scott is the highest peak in Crater Lake National Park.  The hike to the top is just over two miles climbing up over 1,250 feet.  The view from the top is incredible!  You’ll get a bird’s eye view of the blue lake and the surrounding landscape.  Definitely an incredible photo op!  The Mount Scott Trailhead going down will definitely be easier than the ascent.

You can take boat tours to the two islands in Crater Lake.  Visitors enjoy swimming in the lake and fishing for Kokanee salmon and rainbow trout.

Sinister stories have been swirling around Crater Lake for centuries.  Native American Klamath tribes lived around the lake centuries ago.  They believed if someone stared at Lake Crater too long, they would be unable to look away.  The lake, they felt, had the power to mesmerize people and lure them to their deaths in the lake.  Over the years, there have been numerous accidental deaths, suicides, murders, and disappearances.  So who knows?

There are reports of “Big Foot” or Sasquatch sightings in many areas of the country, but the most Big Foot sightings come from Oregon every year.  Visitors have reported seeing Sasquatch in the park and so have park rangers.  Several rangers once reported following a large, foul smelling creature through the forest until it started pelting them with pine cones.

Many visitors have reported seeing smoke and campfires burning on Wizard Island.  When the rangers rowed over to check, they would find no one on the island and no smoke, fire or scorch marks on the ground.

Ranger Kirwan was patrolling when she saw 10 people and a roaring fire campfire illegally in the woods.  When she reached the site, she saw no one and no fire.  She called for back up.  Ranger Kirwan and another ranger made an extensive search but found no trace of the people or they campfire she had seen.

The Old Man is the most well known of the unexplained phenomenon at Crater Lake.  It is a 35 foot tall mountain hemlock that stands vertically in the water.  It was first reported in 1896.  Every day the Old Man is in a different spot than it was in the day before.  So how has a giant hemlock managed to float upright in the lake for over 100 years?

Camping is popular in Crater Lake National Park.  Mazama Campground hass 214 campsites.  There are tent sites, RV sites with and without hook ups.  Each site features a picnic table, a fire ring with a grill and a bear-resistent food locker.

Green Vacation Deals can help you save money if you want to buy a tent, a tipi, or camping cookware.

If your preference is for a hotel, here are some that are close to Crater Lake National Park and have money-saving offers.

Win A Trip To Iceland

Win A Trip To Sicily