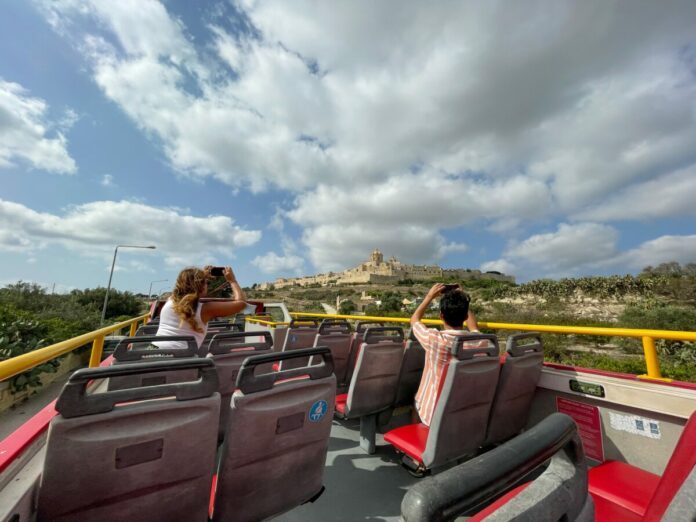 Malta is a beautiful island country in the Mediterranean Sea.  Its beauty and location between Europe and Africa make it a popular travel destination.  If you are lucky enough to visit Malta, I am sure there are many places there you want to explore.

One way to make sure you visit all of them is with the Land and Sea Hop-On Hop-Off Malta.  This is a great tour because it includes both a bus and boat tour.

The bus tour is a great way to see a lot of top Malta destinations.  You can sit on the top of the bus and get great, unobstructed views.  The tour also features an audio guide that is available in thirteen different languages.  So you’ll also learn a lot during the tour.

The main stops on this bus tour include:

The Land and Sea Hop-On Hop-Off Ticket also includes both a Harbour Cruise and a Coastal Route Boat Tour!

The Harbour boat departs from the Sliema Ferry Terminal.  It then makes its way towards Manoel Island in Marsamxett Harbour.  That is where you’ll find the star-shaped Fort Manoel.  The island is also home to the Lazzaretto.  This is a 16th-century quarantine hospital that was built after a plague outbreak in the city.

You have the option to hop off at Esplora and explore Kalkara.  Kalkara is a village that’s home to Fort Ricasoli.  You might recognize this fort from scenes in both Gladiator and Game of Thrones.  When you are done exploring here, you can head back to either the boat or the bus and then be off to your next destination.

The Coastal boat takes you from Valletta to Gozo.  It has several stops along the way, like the gorgeous Blue Lagoon.  Just like with the boat ride or the Harbour boat, you have the option to hop on and off as much as you like.

Both boat rides are a great way to see the island from a wonderfully unique perspective.

Looking for a discount code to help you save money on the Land and Sea Hop-On Hop-Off Tour?  You have come to the right place.

First you need to click here.  Then you need to enter the promo code “ICONIC10”.  It will save you 10% on the cost off Land and Sea Hop-On Hop-Off Malta!  This deal is available through 30 September 2022.  So act ASAP to take advantage of this discounted price!

3 Ways to Save Money Skiing In Italy

Save on Cruises from Marseille