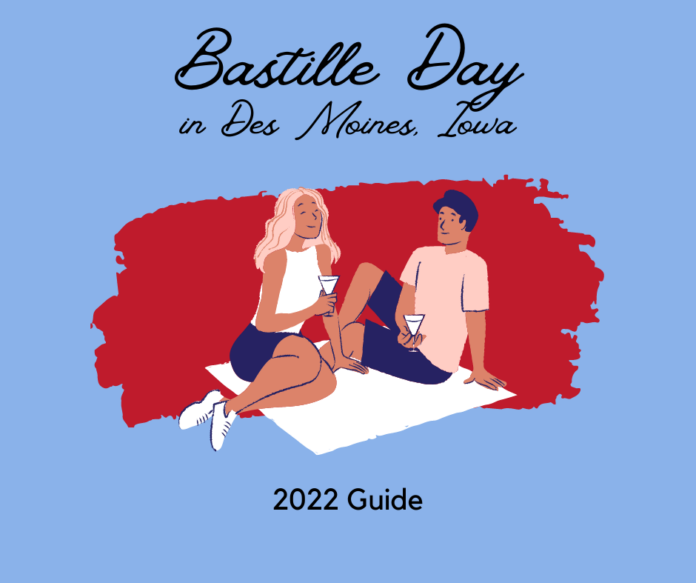 Bastille Day, in France and its territories, is the holiday marking the anniversary of the fall of the Bastille on July 12, 1789. Built as a medieval fortress in Paris, it was serving as a prison for political and religious prisoners. A revolutionary mob stormed the Bastille and released the prisoners. Bastille Day celebrates the overthrow of the monarchy and the start of the French Revolution.

Bastille is a national holiday in France and it is celebrated throughout the country. The largest celebration is in Paris. It begins with a huge military parade and flyover which is followed by concerts, picnics and partying until the wee hours of the morning.

Bastille Day is celebrated in some cities in the United States where French culture and cuisine are honored.

The Alliance Francaise of Central Iowa and the Des Moines Sister Cities Commission are hosting Des Moines’ annual Bastille Day Bash. They are inviting the public to join them in celebrating France’s national holiday on July 14, 2022, at the Birdland Park Ding Darling Shelter.

There will be a petanque tournament. Petanque is a ball tossing yard game that is popular in France.

Music and dancing will be enjoyed. There will be a brief ceremony followed by dinner.

The hosts will provide roast pork, baguettes, dishes and utensils. Guests are asked to provide a side dish to share. You may bring beer or wine but try to avoid glass containers.

There will be a prize for the best French dish.

Last year this family friendly bash had over 100 attendees and this year looks like they’ll exceed that.

If you’d like to visit Des Moines for Bastille Day, you should consider the following hotels. They all have discounted rates which could save you some money. Click on our links to see the discounts.