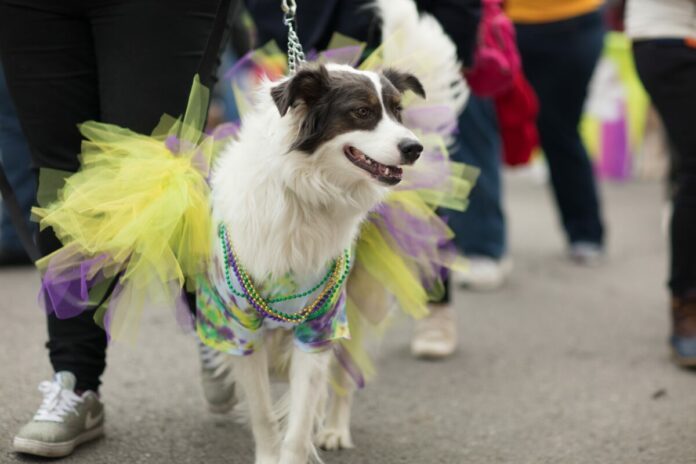 Historians tell us Mardi Gras dates back thousands of years to pagan celebrations of spring and fertility in Rome. The celebrations had parades, lots of eating and even more drinking.

Over the years, the celebration of spring became the traditional prelude to Lent which was 40 days of fasting and sacrifice. The French later dubbed the Tuesday before Ash Wednesday Mardi Gras, which translates to Fat Tuesday.

In the 1790s, a refugee from the French Revolution settled in what is now St. Louis. His name was Antoine Soulard. Soulard translates to drunkard.

It is said that St. Louis’ Mardi Gras began in 1979 with a group of drunk friends. They were walking the streets of Soulard tossing beads to make their own fun before Lent began.

In 2022, 400,000 people are expected to come to St. Louis’ Mardi Gras celebrations and 20
million strands of beads will be tossed into the crowds. Here are just some of the parties, parades and celebrations.

Police Athletic League (PAL) is happening at The Bud Light Party Center on Saturday. February 5, 2022, from 12 pm to 4 pm. This new celebration is about playing games and sipping on cold drinks.

Challenge your friends to games, including

Entry is free with food and drinks being available for purchase. Or you can upgrade with a $35 wristband which includes an open bar of

Proceeds from this event will go to PAL to provide a positive environment through sports and activities for St. Louis youth at no cost.

Amateur chefs from the greater St. Louis area prepare their best dishes for a panel of judges.

The Missouri Lottery 5K Run For Your Beads

Also on Saturday, you can see a fun filled, slightly wacky race. The Missouri Lottery 5K Run For Your Beads has runners in Mardi Gras garb racing through the streets of Soulard. There will be mid-race pit stops stocked with beer and hurricanes for 21+ aged runners. Prizes will be given to the winners in each division plus a prize for the runner in the best costume.

Many of the 5K runners and spectators will go on to the Taste of Soulard. It’s a self guided tasting and pub crawl through the Soulard neighborhood. Your ticket will include 1 drink voucher and 6 food vouchers that can be redeemed at any of the participating venues in Soulard. On Saturday, Soulard Trolley Tramps will be shuffling party goers to restaurants throughout the neighborhood.

The Purina Pet Parade is the largest costumed pet parade on the planet. It’s happening on Sunday, February 20, 2022. It begins at the corner of 12th and Allen at 1 pm.

You and your adorable pet can strut your stuff in this parade, The best dressed pets will be selected as members of the Court of the Mystical Krewe of Barkus. The Coronation Pageant will take place at Soulard Market Park where the King and Queen of Soulard will be crowned.

All proceeds from the parade will go to benefit Open Door Animal Shelter.

Tito’s Vodka Wiener Dog Derby is happening on Sunday and the first heat will begin at 2 pm. This is the nation’s longest running dachshund derby!

In a series of elimination heats, the dogs race down a 30 foot track with the winner moving on to the next round until a champion is crowned. There are 3 age based divisions for the dachshunds. There is also a Wiener Wannabe class for dogs small enough to fit in the starting box.

There will be a Tito’s Wiener Dog Derby hat contest for humans.

“…the social event of the season…” – Riverfront Times

The Mayor’s Ball will take place at The Midway at St. Louis Union Station on Friday, February 25, 2022, at 7 pm. It will feature fine cuisine, cocktails, dancing and spectacular entertainment. It has been described as a “classy affair.”

All of the celebrations have been leading up to the Bud Light Grand Parade. It begins at Busch Stadium and goes through the streets of Downtown South and Soulard and ends with a big bash at Anheiser Busch Brewery.

An integral part of Mardi Gras is the enjoyment of great food. Try these restaurants in the Soulard neighborhood. They were chosen as the 12 Best Restaurants by the users of TripAdvisor.

If you’d like to visit St. Louis to enjoy the Mardi Gras festivities, you should consider the following hotels. They’re located near the festivities and, if you click on our links, you can save money on your stay.

Coupon For Jurassic Quest In Dayton

Save Big on Michigan Hotels