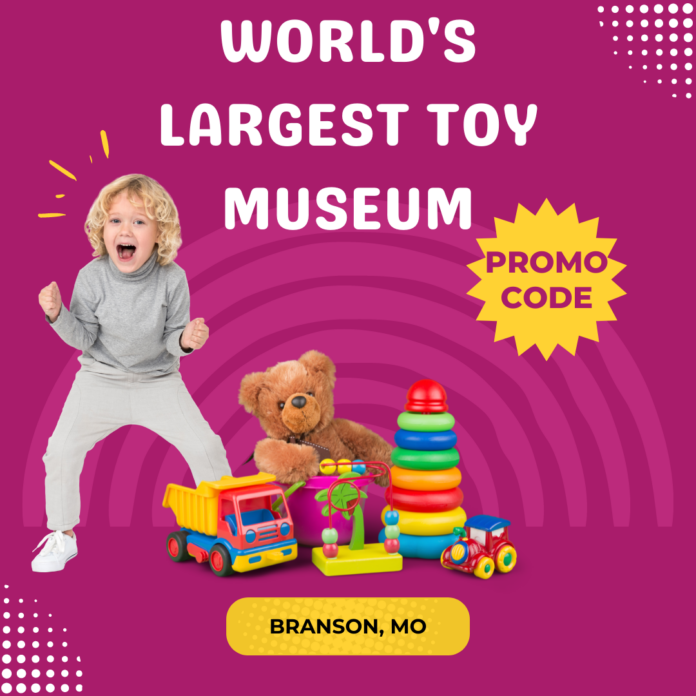 There is something about seeing the toys we played with in our childhood that can bring back such wonderful memories.  And you can do just that at the World’s Largest Museum in Branson, Missouri.

Because as the “Word’s Largest” name implies, there are a lot of toys here.  In fact, the museum is over 26,000 square feet of over one million toys!  The amazing collection of toys ranges from the 19th century up to the present day.  It is so large it is actually comprised of two buildings that house five separate museums.

There are a lot of great exhibits at the World’s Largest Toy Museum.

They have a Christmas Carol Exhibit that features a historic window diorama of the famous Christmas story.  It was originally created in 1935 in New York.  It was then displayed for years at a department store in Houston, Texas.  Now, you can see it at the World’s Largest Toy Museum!

If you’re like me and love Disney, you’ll want to check out the Disney exhibit.  You can see toys of classic Disney characters like Mickey Mouse, Minnie Mouse, Donald Duck, Goofy, Pluto, Snow White, and the Seven Dwarves.  There’s also even an exhibit just for Disney’s The Lion King toys.

You can enjoy memories of your schooldays with the classic lunchbox exhibit featuring favorite characters like GI Joe and the characters from the Wizard of Oz.

Looking to save money on a ticket to the World’s Largest Toy Museum?  Click here and you can save $4 per ticket!

Win A Trip To The Super Bowl & Pre-Game Party

Ripley’s Believe it Or Not Branson Discount Tickets