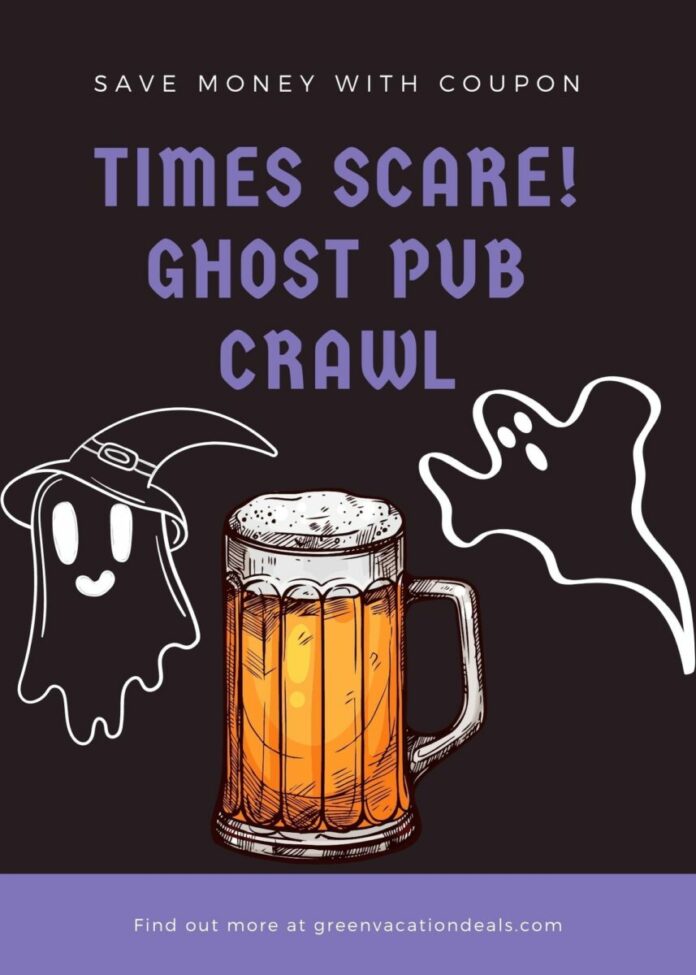 Take a ghostly walk through Times Square and Hell’s Kitchen. You can also enjoy some cocktails along the way on Urban Village Times Square Ghost Pub Crawl.

Learn about Broadway and its theaters as you hear tales of its hauntings.

You will hear stories about Olive Thomas, a onetime Ziegfield Follies chorus girl in the New Amsterdam Theatre. She went to Hollywood and married Jack Pickford, brother of Mary Pickford. The marriage didn’t go very well. He told her he had syphilis and she probably did too. She then “accidentally” took a whole bottle of Jack’s medicine, mercury bichloride, which is poisonous in large quantities. She died and was buried in the Bronx.

Then workers at the New Amsterdam started seeing Olive backstage. And, since that time, she’s become the most active ghost on Broadway. Her picture has been placed at every entrance to the theatre so workers can greet her when they arrive for work. It is hoped that may keep her mischief to a minimum.

Doors opening and closing by themselves, flickering lights, objects that move by themselves, wispy manifestations – all that has happened in the New Amsterdam Theatre and more. In the 1990s, a night watchman resigned on the spot after watching a woman cross the stage and disappear through a solid wall. Your guide will tell you more about the most active ghost on Broadway.

I’m sure you’ve heard the phrase “playing the Palace.” The Palace Theater opened in 1926 as a vaudeville house. The legendary Palace is said to have more ghosts than any other Broadway theater. Many have reported seeing the ghost of a child who plays peekaboo in the mezzanine and a musician dressed in white who appears in the orchestra pit. And there are many, many more stories.

Many people believe the mega talented Ethel Merman has never left the Imperial Theatre. Owner/producer/playwright David Belasco loved his theatre, Belasco Theatre, so much that he lived in an apartment above the theatre and was always there. And many believe that after his death he is still there.

Your guide will tell you about the famous Round Table at the Algonquin Hotel and which members might still be there. You’ll hear about a haunted carriage house in Hell’s Kitchen. And you can enjoy a drink in one of New York City’s oldest and most haunted bars. All this and more on this fascinating tour.

Are you looking for a way to save money on this great tour? Click here and you can save $34.50 (50% discount) on each ticket.