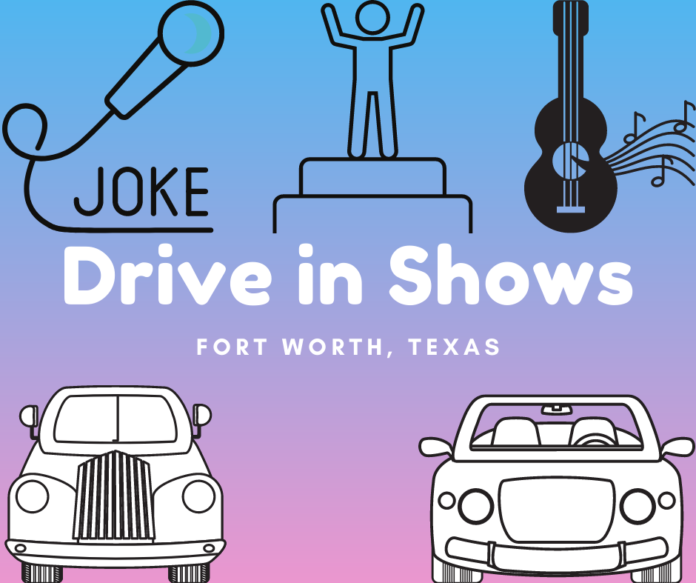 Enjoy a “blast from the past” at The Coyote Drive-In in Fort Worth, Texas.  Set on 20 acres, their four giant screens (everything really is bigger in Texas) show top movies.  The Drive-In also features music concerts and comedy shows.

It’s great to get out of the house and enjoy entertainment with your family while staying safe.  And you can do that at Coyote Drive-In.  You can watch safely in your car and access the sound on your car radio.  Or you can bring a radio, blankets, or lawn chairs and sit in front of your vehicle (not to the side).  Social distancing must be maintained.  Masks are required when you go to the restrooms or the concession stand.

And, speaking of concession stands, Coyote Drive-In has an outstanding one.  They have everything you’d expect to find, like hot dogs, hamburgers, and soft drinks, plus a whole lot more.  Enjoy chicken wings, a foot-long corn dog, a cordon blu sandwich, a Frito pie and so much more.  Their double bacon cheeseburgers and smore pockets have gotten rave reviews.  And, if you’re over 21, you can purchase beer, wine, and specialty drinks.  For a small fee, delivery to your car is available.

The upcoming concerts and comedy shows include

Country music star, Kane Brown is the first singer to top all 5 of Billboard’s Country Charts at the same time.  His “Encore Drive-In Night” video was recorded live.  It will give viewers an intimate first row experience with Kane featuring interviews and behind the scenes footage as well as his concert performance.

Iliza’Shleshinger is a comedian, actress and television host.  In 2008, he won NBC’s Last Comic Standing.  Iliza has been the host of the TBS game show “Separation Anxiety” and the syndicated dating show “Excused.”  She has also hosted her own late night talk show, “Truth & Iliza.”  “The Iliza Shleshinger Sketch Show” premiered on Netflix in April, 2020.

Bert Kreischer is a comedian, actor and television host.  He has appeared on Comedy Central’s “Premium Blend,” VH-1’s “Nevermind The Buzzcock.”  He was the host of FX’s “The X Show.”  His segment of “The X Show,” “Hurt Bert,” received Talk Soup’s award “Clip of the Year.”  It was developed into his current TV show, “Hurt Bert,” on FX.  He’s also hosted “Bert the Conquerer” and “Trip Flip” on the Travel Channel.

A native of Old Hickory, Tennessee, is a stand up comedian.  He won both the New York Comedy Festival and the Boston Comedy Festival in 2013.  Nate has made numerous appearances on late night shows with Conan O’Brien and Jimmy Fallon.  He’s made two comedy albums, the NetFlix series, “The Standups” and a Comedy Central special.  His first solo one hour special, “The Tennessee Kid,” debuted this year on NetFlix.

And if all this isn’t enough to make you want to go to the Drive-In, you will also get a beautiful view of Fort Worth’s skyline.  It makes a stunning backdrop to all the entertainment.

Looking for the lowest price available for tickets to these drive-in events?  Click here and you can book them for low prices.