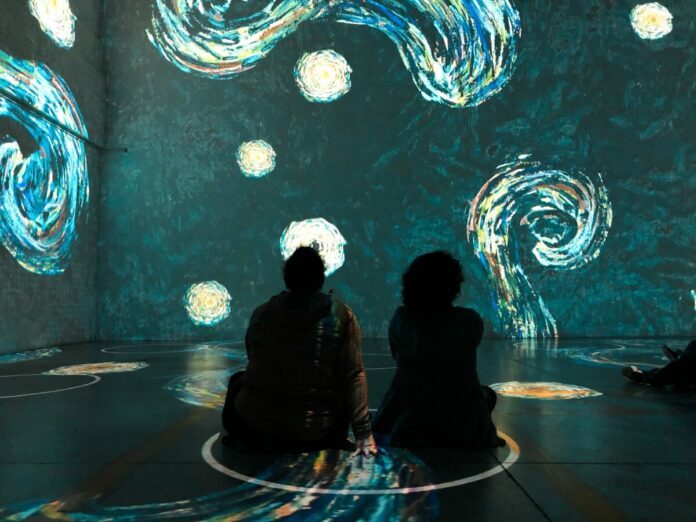 Immersive Van Gogh is an exhibit that began in Paris, France, and was a smash hit.  Then it headed to Toronto in Canada and became a huge hit there as well.  Next up was America.  And given that it sold out in Los Angeles, New York City, and San Francisco, I don’t think I have to tell you that it was a success there, too.

Now, you can see why this became the number one selling show in the world.  Because Immersive Van Gogh Exhibit Denver is now being housed at Lighthouse Denver at 3900 Elati Street!  This is the location of the former Regency Hotel.  It is just west of the River North Art District (and adjacent to I25).

Designer David Korins transformed Lighthouse Denver into a one-of-a-kind venue for Immersive Van Gogh.  Korins has won an Emmy and been nominated for a Tony.  His designs have been included in many hit Broadway shows like “Hamilton” and “Dear Evan Hanson”.

Immersive Van Gogh will be running in Denver through October 10, 2022.  So you still have a chance to see this impressive display.

Immersive Van Gogh is a great show for anyone who appreciates art or wants to see art presented in a new, unique, up-to-date way.  Because this show uses state-of-the-art technology to really make you see Vincent Van Gogh’s artwork.  It features 500,000 cubic feet of projections, 60,600 frames of video, and 90,000,000 pixels.  You’ll really feel his sunny landscapes and night scenes from his portraits come to life.

Looking for a discount code to help you save money at Immersive Van Gogh Denver?  Well, I can get you something even better!

All you have to do is click here.  And then you can automatically save on tickets, no discount code or promo code or needed!

You can find discounted tickets, from basic off-peak tickets to Peak Premium Flex tickets.  That ticket option not only gets you a peak ticket but a free promotional poster and cushion rental.  You also get the flexibility to arrive one hour earlier or later than your scheduled time (as long as the exhibit is open during that time).

If you’re interested in Immersive Van Gogh, then perhaps you should check out the Immersive King Tut exhibit that’s also in Denver.  You can click here to get a coupon for this show.

Win A Flight To Hawaii

Save on Magical Mother’s Day with Special Show & Champagne at...