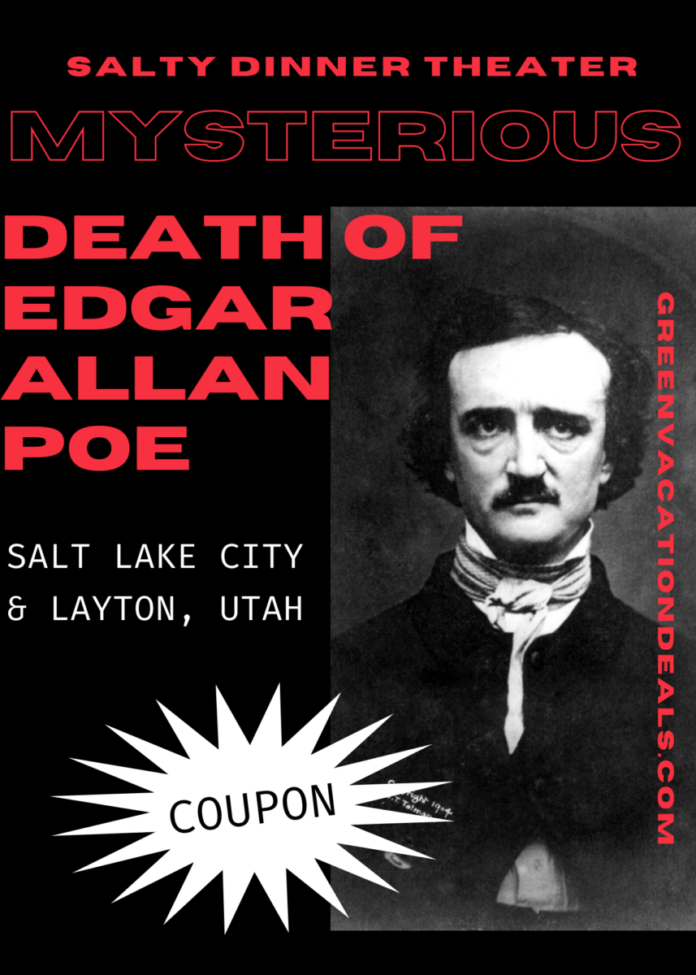 Salty Dinner Theater began in December of 2010 with their own version of “A Christmas Carol” at Madeline’s in Sandy, Utah.  Since then, they’ve grown and are now doing a variety of shows at several different restaurants from Layton to Provo.

This year, they’ve got a great show for Halloween.  This show is The Mysterious Death of Edgar Allan Poe!

As the title of the show tells you, this show focuses on the mystery of what happened to Edgar Allan Poe.  Edgar Allen Poe’s death on October 7, 1849 (during the Halloween season, no less!) has, to this day, remained a mystery.

On October 3rd, a Baltimore Sun compositor, Joseph W. Walker, went to Gunner’s Hall, a public house that was being used as a pop-up polling location for the 4th Ward polls on October 3rd.  When Walker got there, he found a man dressed in shabby second-hand clothes, lying in the gutter, semi-conscious and unable to move.  That man was Edgar Allan Poe!

Poe had recently come from Richmond, Virginia on a speaking tour.  He left Richmond on September 27th, and no one had seen or heard from him since.

Poe spent his final days experiencing bursts of delirium while he was at a hospital.  He kept having visual hallucinations.  The night before his death, Poe’s doctor says Poe repeatedly called out for “Reynolds”.  No one knows who Reynolds was.

His death certificate says the cause of his death was phrenitis, otherwise known as swelling of the brain.  But the mysterious circumstances surrounding his death have led many to speculate about the true cause of Poe’s demise.

Now, you may find out the true cause of his death.  Will you be able to solve it?

You see, The Mysterious Death of Edgar Allan Poe is an interactive show.  The cast interacts directly with the audience.

It should make for a great night.  And what can make it even greater is taking advantage of a great coupon!

Green Vacation Deals readers can take advantage of coupons for a couple of nights of the show.

First, you need to click here.  Then you save 38% on your ticket!  The saving is automatic, too, so no promo code or coupon code is needed.

The discounted admission is for the following dates and locations:

A lot of the dates of this show has sold out.  So go ahead and get your discounted ticket ASAP!

Win a Trip to the South Beach Wine & Food Festival