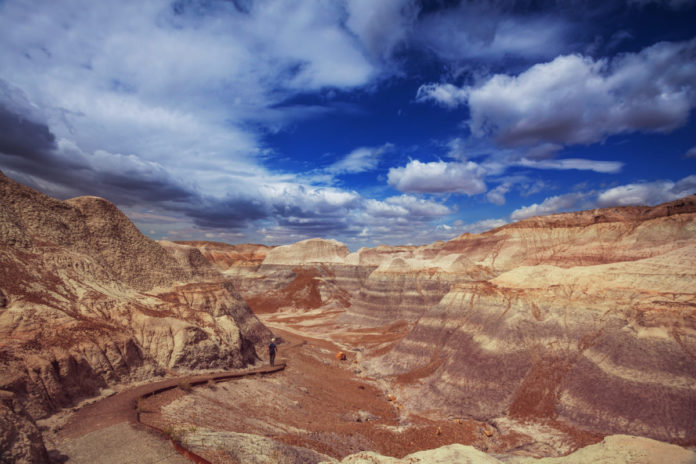 Petrified Forest National Park is located in Navajo and Apache counties in northeastern Arizona.  It got its name from the large deposits of petrified wood in the area. Named a national monument in 1906, it became a national park in 1962.

More than 12 thousand years of human history is represented at this National Park.  From prehistoric peoples to early explorers to the Civilian Conservation Corps to Route 66 motorists, so many have come to the park and have stores to tell.

The Petrified Forest is known for its fossils, especially fallen trees from the late Triasssic ‘Epoch of the Mesozoic era, about 225 million years ago,  Other fossils include ferns, cycads, ginkgoes, phylosaurs, large amphibians and early dinosaurs. Paleontologists have been unearthing and studying these fossils for over 100 years and there are more than 600 archeological sites.

Petrified Forest National Park occupies 146,930 acres.  Its temperatures vary from summer highs of about a 100 degrees to winter lows well below freezing.  The main environment is short-grass prairie on semi-arid grassland. While it is dry, there is snow in the winter and rain during the monsoon.

Over 16 varieties of lizards and snakes make Petrified Forest their home.  They consume large quantities of insects, spiders, scorpions, other reptiles and small animals thus preventing infestations of any single species.

You are much more likely to see animals in the park if you come as early as you can and stay as late as you’re allowed to.

A 2005 survey found 447 species of plants.  Protected from development, the park has some of the best brassland in Arizona.  The volcanic soil in the Bidahochi Formation support shrubs, small trees, grassses and herbs.

The National Record of Historic Places has listed 9 sites in the Petrified Forest National Park.

The Painted Desert is unlike anything you have ever seen.  The beautiful multicolored layers of mudstone and sandstone created over millions of years.  Color varations are the result of iron in the sediments and the length of time the layer was exposed to air during the oxidation process.

Pintado (the Sspanish word for painted) Point is the highest point along the park’s driving route.  It gives you 360 degrees view of the Painted Desert.

Perhaps the most photographed manmade feature in the park is a rusted-out 1932 Studebaker.  This car marks where the famous Route 66 ran through the park from 1936 to 1958.

The Teepees is named for the shape of the multilayered rock formations has a gorgeous palette dominated by blue, white and rust.  The shades and hues of the Blue Mesa are a favorite.

In the Painted Desert, light rules.  Colors seem.to move and change as the sun crosses the sky.  At the first light of day and at dusk, the angle of the sun makes the views and colors of the Painted Desert at their most spectacular.

At points in the park, petrified logs dot the landscape.  The Agate Bridge is a 110 foot long petrified log over a gulley.  The Jasper Forest overlook gives you a sweeping view of petrified logs as far as the eye can see.

The Crystal Forest is the place to see any petrified trees and logs that look to be cleanly cut with chainsaws.  Appearances can be deceiving and no chainsaws have been used here. Quartz crystals inside the logs produce clean fractures when pressured by forces of nature.  Early morning sun and late afternoon sun gives you the best view of the sparkling colorful crystals.

The Giant Logs Trail is a .4 mile paved trail and gives you views of some of the largest specimens in the park.  You can’t miss “Old Faithful,” an intact log almost 10 feet wide at itss base and 35 feet long.

Puerco Pueblo is an ancient community and current archeological site.  Petroglyphs adorn multiple rock faces along the perimeter of the remains of this village.  Pueblo residents scratched images and symbols in black “desert varnish” to reveal lighter stone beneath.

Newspaper Rock is an overlook where more than 650 petroglyphs dating back over 2,000 years are displayed.  The overlook has stationary spotting scopes but binoculars would give you a better view.

People can go sightseeing by automobile with overlooks, hiking and biking.  Horseback riding is allowed in the wilderness areas but you must provide the horse.

Ancestral Puebloan people used petrified wood as a building material.  The Agate House is an 8 room pueblo built and occupied sometime between 1050 and 1300 near agricultural fields.

There are no campgrounds or overnight lodging or parking.  The exception would be for backpackers with wilderness hiking permits.  They can sleep under the stars in the park in their own tents. If you’re interested in buying a tent, click here to see how you can save money.

There are a couple of RV parks near Petrified Forest National Park.

If you want to rent an RV for your trip, Green Vacation Deals recommends RVshare.

If your preference is for a hotel, here are some that are close to the National Park and have money-saving offers.

And if you’d like to read more about the Petrified Forest National Park, try these books.  Click on the links to see how you can save money.

Save on Tequila & Taco Music Festival in San Diego

Win a Trip to Charleston SC

Save on California Coast Cruises from Vancouver

Get a Free Day at SeaWorld San Diego