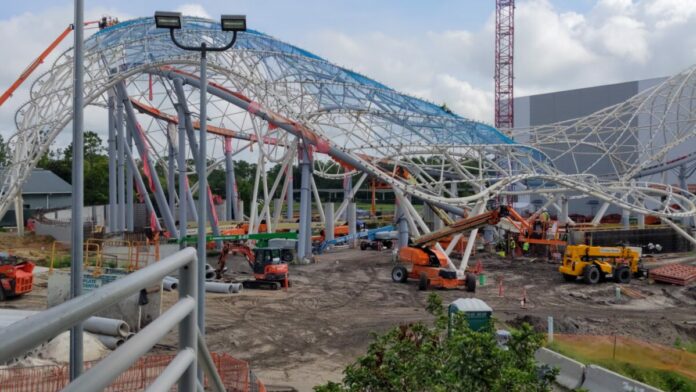 If you think that ride sounds familiar, that might be because it already exists.  Just, not at Walt Disney World.  This same ride is at the Shanghai Disneyland theme park.  And it’s very popular there.  So you know this is going to be a great ride!

The ride may sound familiar to you because it is themed to a Disney movie.  TRON was a science fiction action-adventure film from 1982.  This film follows the protagonist Kevin Flynn who is a computer programmer and a video game developer.  He is transported inside the software world of a mainframe computer.  He has to then interact with programs in his attempt to escape.  You can catch it on Disney Plus if you haven’t seen it yet before or you don’t remember it.

This ride is a coaster-style ride.  I think that’s a great addition to Magic Kingdom because they really don’t have that many roller coasters.  It is going to be in Tomorrowland.  The vehicles you ride resemble the lightcycles that were in Tron and Tron: Legacy (that is the sequel to Tron).

The TRON Lightcycle Run was supposed to debut around the time of Disney World’s upcoming 50th Anniversary Celebration, which takes place this fall.  Unfortunately, as well know, COVID-19 happened, so it understandably got delayed.  So how delayed is it?  Check out our video to see construction and the opening date!

Still, even without TRON Lightcycle Run at Disney World, the 50th Anniversary is going to be very exciting.  There will be a new nighttime spectacular, Disney Enchantment, that will debut this fall.  Not only will there be fireworks, but for the first time ever, there will be projection effects that extend all the way from Cinderella Castle to Main Street, U.S.A! A new interactive play pavilion called (accurately) PLAY! Pavilion is coming to Epcot.  A new restaurant is coming to Epcot, too: Space 220, which is space-themed.  A new hotel is even coming to Disney World!  Star Wars: Galactic Starcruiser, which is really more of a vacation experience than just a hotel.

And if you want new rides, you got those too!  Epcot has two new rides.  Remy’s Ratatouille Adventure is a Disneyland Paris import that’s coming to the France pavilion.  And Guardians of the Galaxy: Cosmic Rewind will be Epcot’s first roller coaster!

So I know you want to be headed to Disney World this fall!  To get discounts on tickets and hotels at Disney World, click here.  You will be really happy with the rates you find here!

Is Disney Genie Plus Worth It?