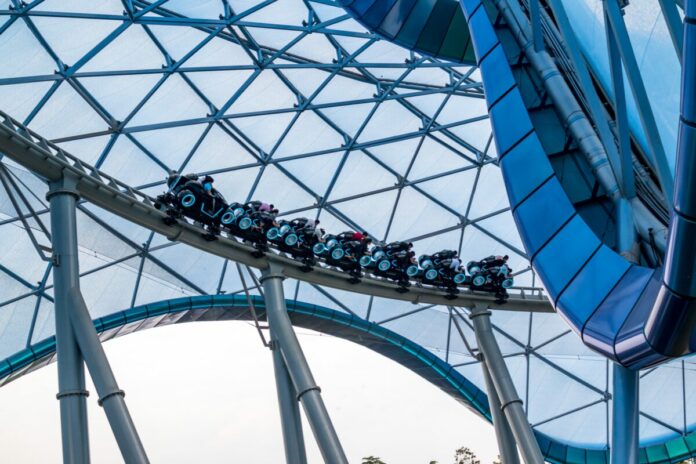 Tron Lightcycle Power Run is a popular steel motorbike roller coaster in Shanghai Disneyland. It was one of the original rides that debuted on Shanghai Disneyland’s opening day, June 16, 2016. And it’s the symbol of and premier ride in all of Tomorrowland!

We’re going to go over what the attraction is like, as well as the franchise that helped inspired it. And then we’ll share how to get discounted tickets to Shanghai Disneyland in case you want to see firsthand why this ride is so fun.

Please note – there are some ride spoilers ahead! If you want to be completely surprised on Tron Lightcycle Power Run, then just skip down to the tickets section.

The Tron Coaster at Shanghai Disneyland

Prior to the Ride

Before anything else, you’ll need to store your bags and personal belongings in a locker. The lockers are located to the left of the Tron ride. You’ll have a couple of options. You can simply put a 1-yuan coin in and keep the key with you. Or, if you want something that’s more high tech, there are lockers with screens so you can input a lock/unlock password.

Next, you’ll enter through a small corridor and will be directed to a small room (or “portal”). The idea is that you’ll become miniaturized versions of yourself (not really, of course) so that you can enter a video game world. At the end of a countdown, one of the walls becomes transparent (it’s actually smart glass), suddenly revealing the roller coaster.

The rest of the queue fills you in on the story of the ride. Four teams are competing in the Power Run: Blue, Red, Orange, and Yellow. Guests are always on Team Blue. You’ll be racing on motorbikes, trying to beat the other teams. The goal is to be the team that captures 8 Energy Gates (basically, you’ll capture a Gate whenever a team member rides their bike under an enormous circle).

On the Tron Ride

When the queue ends and you’re ready to get on the ride itself, the cast member will teach you the best way to sit on it. You see, each guest sits on their own individual bike. First, you’ll put your knees down, and then you’ll bend forward and pull the motorcycle handlebar toward you. A safety bar will gently touch your back to make sure you don’t fall off during the ride. If this sounds confusing, don’t worry. It’s actually easy if you just follow the instructions. (And it’s not as uncomfortable as it may sound, either!)

The actual ride time is fairly short, coming in at around 2 minutes. During that time, you’ll reach speeds of up to 60 miles per hour, which places it among the fastest indoor roller coasters in all of Disney theme park history. You’ll also briefly leave the indoor setting and venture outdoors (sometimes to the surprise of nearby guests). Then it’s back inside, among amazing neon visuals and sound effects, to finish your battle against the other teams. (Here’s another spoiler – you don’t need to worry, because the Blue team always wins!) To get a clearer idea of what the experience is like, check out this video of the queuing area and a ride-through of the Tron coaster at Shanghai Disneyland.

The theming (and name) for the attraction comes from the 1982 Disney movie, TRON. The movie mixed live-action with computer-generated visuals and backlit animation (the first of its kind to do so). It involved a computer programmer/video game developer (played by Jeff Bridges) who enters into a digital virtual reality and interacts with programs.

If you’ve never seen it, or if it’s been decades since you last saw it, you can currently catch it on Disney+. However, a lot of the special effects and technology that were cutting edge at the time do appear fairly dated now, as is often the case.

Luckily, you don’t need to be familiar with the original movie to enjoy Tron Lightcycle Power Run. However, if you do decide to watch or rewatch it and decide you can’t get enough of it, there’s a whole Tron franchise (most of which is from the last 15 years or so). There was a 2010 movie, Tron: Legacy. In 2012, a relatively short-lived (19 episode) animated TV series premiered on Disney XD. There are also video games and comics. You can even choose from a number of novels, such as Tron: Legacy: Out of the Dark and Tron: Legacy: Into the Light.

Want to visit Shanghai Disneyland? Then you’ll definitely want to save money on your tickets.

Click here to save over $10 per ticket on Early Bird Tickets. This type of ticket is a 1 day ticket that needs to be booked at least 10 days in advance.

If you’d like to learn more about the Tron attraction, as well as other Shanghai Disneyland rides and the park in general, I highly recommend this book. It was a fantastic reference in writing this, and it’s also a great read!

In case you haven’t heard, the Tron ride is coming soon to Disney World in Orlando, Florida!  You can see a video of the construction here:

4 Star Barcelona Hotel for Under $100

Win a Surf Trip to Hawaii