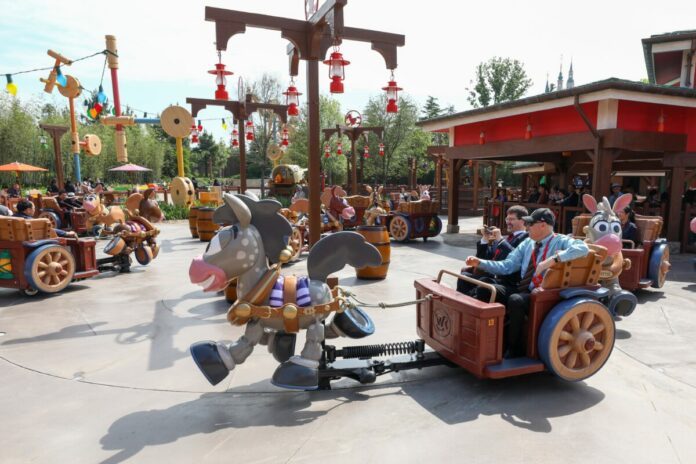 Woody’s Roundup is more than just a (ficitional) TV show from the 1950s, introduced in the movie Toy Story 2. It’s also a ride at Shanghai Disneyland! It is, appropriately, located inside Disney·Pixar Toy Story Land.

The backstory for the attraction is that Andy had been playing with a Western town and stable playset in his backyard. When his mother called him inside, Woody and Jessie came to life (as they tend to do!). They then got to work hitching the toy ponies to carts and organizing a square dance (naturally).

In this ride itself, guests can sit inside those carts and enjoy being swung around to fun, country-style songs like “You’ve Got a Friend in Me.”

Check out this video of the ride to see for yourself what it’s like (and don’t miss the cute “Wanted” poster in the queuing area!):

Also, if you’ve ever ridden the rides Mater’s Junkyard Jamboree (in Cars Land at Disney California Adventure) or Alien Swirling Saucers (in the version of Toy Story Land at Disney’s Hollywood Studios), then you have an idea of what Woody’s Roundup is like.

There are two other rides you can enjoy inside Disney·Pixar Toy Story Land.

This is a caterpillar-style ride themed to the Slinky Dog character. You can also find a version of this ride in Hong Kong Disneyland. On this steel half pipe coaster ride, guests sit inside a (giant) toy car.  The car races forward and backward on a U-shaped track (via “remote control,” as used by Rex from the Toy Story franchise). Walt Disney Studios Park in Paris and Hong Kong Disneyland also have versions of this attraction.

Other things to do in this themed section of Shanghai Disneyland include getting a selfie with Woody and Jessie at The Meeting Post. You can also stop by Al’s Toy Barn to go shopping for souvenirs.

And if you’re looking to purchase admission to the theme park, click here for various ticket and package options.

EPCOT Festival of the Arts

Use Promo Code to Save on Best Of Orlando

How UK & Ireland Residents Can Save on Disney World Tickets