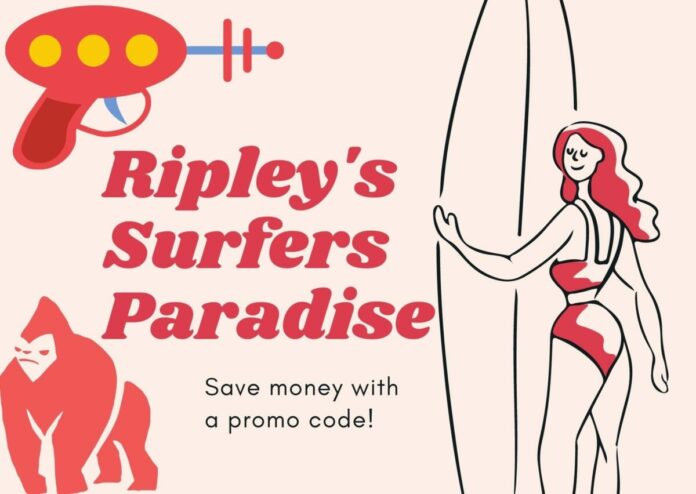 There are a lot of fun things to do in Surfers Parade, the beautiful suburb of Gold Coast, Queensland, Australia.  But the weirdest thing you can do has got to be Ripley’s Believe It Or Not!

Ripley’s Odditorium is two floors of weirdness and fun, with a 9-metre blue-ringed octopus glowing on the top of the building.  They’ve got 12 galleries and more than 300 exhibits.

Here is just some of what you can see and experience here:

You can also check out the all-new Funplex, Ripley’s newest interactive gallery.  It has hands-on interactives, sensory experiences, and optical illusions.

Take a space oddyssey at Ripley’s Believe It Or Not!  Here you’ll be able to find out what happens to your body in space.  You’ll get to see a piece of the Zagami Mars meteorite.  And you can interact with a life-sized R2-D2 from Star Wars.

Try to carefully make your way through laser beams without breaking a beam while the clock counts down on the Impossible Laserace.

Ripley’s Moving Theatre 7D takes place in their state-of-the-art theatre.  It’s a 3D-movie, but that’s not all.  Your seats also move so you can feel like you’re experiencing it (and while this doesn’t generally cause motion sickness, you can request to turn off seat motion).  You’ll compete against your seatmate to see who gets the best score.

There are six high-impact 3D films to choose from:

Your first night on patrol in a town that was once sleepy would have to be the night it became infested with zombies, right?  Try to fight them off and survive in Zombies!

Zip around Neo Tokyo to avoid an army of robots and make sure they don’t take back the contest of the secret package!

The setting is turn-of-the-century London, England.  You’ll need to fight off werewolves who are hunting you.

The setting is the wild, wild west.  You’re a cowboy trying to stop an evil scientist bent on destroying the world in a chase that includes river rafts, wagons, and trains.

Try to escape a twisted amusement park when you are trapped inside the nightmare of a demented clown.

It’s your time to save the world!  You’ll have to fight off armies of alien robots and take out the masterminds behind this world-destroying plot.

Looking for a promo code to help you save money at Ripley Believe It or Not?  I can do better than that!  Just click here and you can get a combo ticket for both Ripley’s Believe It Or Not! Odditorium and the Moving Theatre 7D.  You’ll save 20% automatically on your admission.  No promo code is even needed!