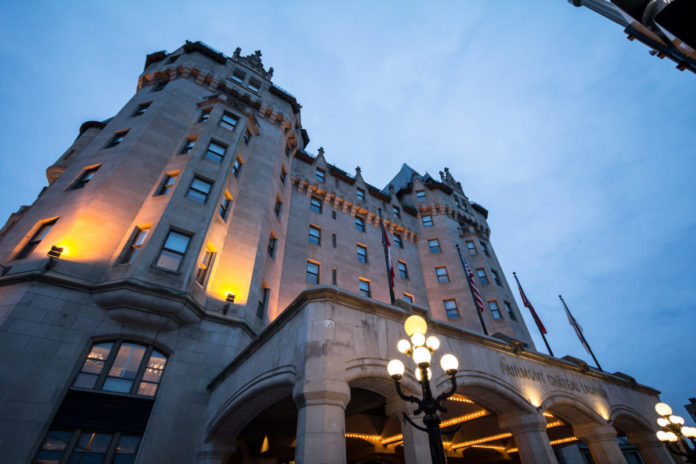 Hear spooky tales and take a walk through Ottawa history.  Listen to stories of tragedies, horror, and ghosts.  Learn about phenomena that have no reasonable explanations.  See some of the most haunted places in Ottawa.

Opened in 1873, Lisgar Collegiate Institute is Ottawa’s most picturesque high school and one of its most haunted buildings.  A section of its courtyard is blocked off during the winter.  The blocked off area is directly beneath the very steep roof of the fourth-floor attic.  In the 1940s a student was walking there when a slab of ice slid from the roof.  It hit her and killed her.  After that, people started seeing a girl standing watch at the attic window.

Later, a janitor was shoveling the roof, lost his footing on the ice and fell 400 feet to his death.  Janitors then complained they felt a steep drop in temperature as they approached the attic door.  Others heard strange noises coming from the attic.  Late at night, many people reported strange lights in the attic window.

The Fairmont Chateau Laurier is Ottawa’s oldest building.  Its owner, Charles Melville Hays, went down with the Titanic on April 14, 1912.  The hotel was opened two months later.  Although Hays wasn’t there for the opening, many believe he’s been in the hotel ever since.  A man’s voice has been heard singing in the stairwell, people have been tapped on the shoulder when no one is there and rearranging of the furniture.  You can check this historic hotel out for yourself.

Just be sure to bring your camera.

The Bytown Museum has the reputation of being a hotbed of paranormal activity.  There have been numerous reports of people hearing heavy footsteps running at them when no one is there.  These heavy footsteps have also been heard on the staircase coming up behind people.  Visitors and staff have sworn that they’ve heard old porcelain dolls crying.

You’ll also hear about the thousand workers who died during construction of the Rideau Canal, their cemeteries and paranormal activity.  This tour is educational and very entertaining.

If you are looking for the lowest price available for this tour, then click here.

Win A Trip To See The Jonas Brothers In Las Vegas