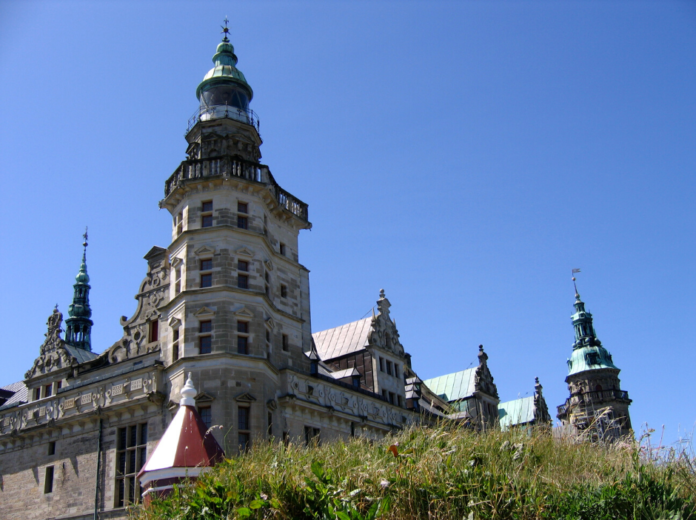 Take a private guided tour of the beautiful castle immortalized by William Shakespeare in Hamlet.  See Kronborg Castle, aka Hamlet Castle, one of Denmark’s top attractions, on a day trip from Copenhagen.

Kronborg Castle was the most powerful and important castle in Scandinavia.  It was built in the 1420s on the coast at the narrowest point of the strait of Oresund.  A strategically important location, it is the entrance to the Baltic Sea.  The Danish King controlled the passage in and out of the Baltic Sea and collected money from all the trade ships as they passed.

The castle was named Kronborg which translates to “Crown Castle.”  It was enlarged in 1585.  When they enlarged the caste, it wasn’t torn down, they just built on top of it.  What you see today is the castle as it looked in 1585 with basically the same dimensions.

Kronborg Castle has been used as a residence for the King, a garrison, a prison, and currently as a museum.  The army left the castle in 1923.  After a thorough renovation, it was opened to the public.  Kronborg Castle was added to UNESCO’s World Heritage list in 2000.

Your tour will include round trip transportation by train from Copenhagen.  You will have a private guided tour of the castle with the full attention of your guide.  As you stroll through the castle’s many rooms, your guide will provide commentary on what you’re seeing and its importance.

The castle is breathtaking, both inside and out.  See the impressive ballrooms, the Royal Chambers, the chapel, and the halls with beautiful tapestries dating from 1580.

Discover the legends surrounding the Danish Prince who became such an important figure in the world of literature.  One of the myriad of mysteries surrounding Shakespeare is:  Did he visit Kronborg Castle?  No one knows.  But if he didn’t, how was he able to describe the layout of the castle so accurately and name some of its residents correctly in Hamlet?

The other Danish figure attracting visitors to the castle is Holger the Dane.  One of the 12 knights (Paladins) of Charlemagne, he is called a sleeping hero.  There is an imposing stone statue of Holger in the castle.  Legend has it that he will sleep until the hour of Denmark’s greatest danger.   At that time, Holger the Dane will rise and fight to defend his country.

Explore the dungeon, the dark, creepy crypts, and catacombs beneath Castle Kronborg.  Stroll through the castle’s grounds and gardens.  You’ll see an impressive collection of cannons pointing at the Oresund Sound and Sweden.

Are you looking for a way to save money on this tour?  Click here and you can save $12 to $44 on each ticket.

Win a Trip to Ireland