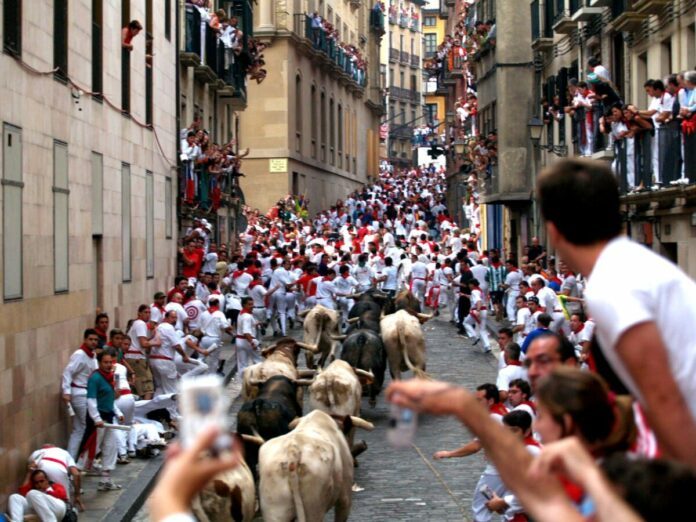 The running of the bulls is probably the most famous festival in Spain. The 9 day San Fermin Festival runs on the same dates every year, from July 6 to July 14 in Pamplona, a city in northern Spain.

The festival honors San Fermin, the patron saint of the city. In the 3rd century, A.D. he was beheaded while trying to spread Catholicism. The first San Fermin Festival began in 1591.

The running of the bulls began as a prelude to a bullfight. In the 1800s, townspeople would line the streets to watch the bulls being “run” or transported from the corrals to the arena. Teens and young men would show off their machismo by jumping in front of the bulls and running.

Today a million people will come to Pamplona to see the running of the bulls. More than half of those who run with the bulls are tourists. Running is free but you must be 18 years old and sober.

The festival begins with a mass at the Chapel of San Fermin. Attendees wear red which symbolizes the blood spilled in San Fermin’s death.

Running of the Bulls 2022 Daily Schedule

Arrival day for those who want to see the next day’s opening ceremony.

The mass and afterwards the opening ceremony begins at noon on the Plaza Consistorial (need to be on the balconies earlier). Today is the only day of the Rejones bullfight (matadors on horseback) at 6:30 pm.

First Pamplona bull run at 8 am (be on balcony before 7 am). It will be very crowded for the first bull run. Procession of San Fermin at 10 am and the first traditional bullfight in the Plaza de Toros at 6:30 pm.

Daily bull run and bullfight continue. Departure day for those who only came for opening ceremonies and first bull run and a great day to arrive for the weekend.

Daily bull run and bullfight continue. Beginning of Europeans coming for the festival.

Daily bull run and bullfight continue. Very busy day with people from other places in Spain.

Morning bull run will be crowded with weekenders still in town. Great arrival day for those coming for the last days.

Final day of the festival Closing ceremony at midnight in Plaza Consistorial is very emotional.

The balconies around the Plaza Consistorial are the best places to watch the running of
the bulls.

You can stand in the Plaza Consistorial but it will get extremely crowded. There will be big screens at several places in the city where you can watch the running of the bulls.

Other festivities during the nine days include marching bands, fireworks, a Fire Bull, parades, wood chopping competitions, concerts, a band of pipers and dancing, street theater, outdoor music and dancing, bosque music, dancers from different towns and villages and more.

If you’d like to go to Pamplona for the running of the bulls, you should consider the following hotels. They offer discounted rates. But act quickly, these deals won’t last very long.

Other Activities in Pamplona

If you’re in Pamplona, a great way to see the city and learn about local history and lore would be on a city tour.

You can also visit nearby wineries.

A great way to see the vineyards is on a hot air balloon flight.

Take a tour of the Plaza de Toros de Pamplona and learn about the bullfights.

Rick Steve’s European Festivals was instrumental in helping me prepare this blog entry.  If you would like to learn more about the Running of the Bulls and other European festivals, click here to buy the book yourself.

Also, check out our blog about the Palio of Siena for more information about another great European festival.