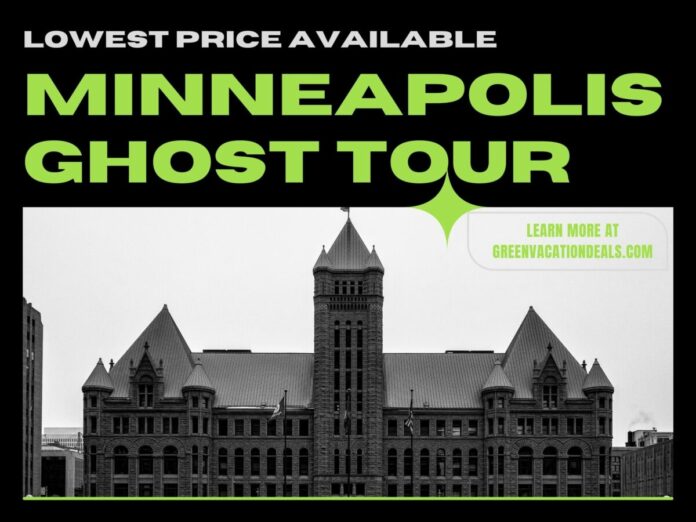 You’ll meet your guide at the Mill Ruins Park sign that is right by the the Stone Arch Bridge over the Mississippi River. Mill Ruins Park was the home of several flour mills. With millions of flammable particles floating in the air, flour mills can be a powder keg. On May 2, 1878, the biggest flour mill in the world exploded. All 14 men working in the mill were killed. The fire spread to nearby mills. 4 more men died fighting the fires. Hear stories of paranormal activity stemming from that tragic event.

You’ll stop at the Minneapolis City Hall, a magnificent building that resembles a European castle. The fifth floor was originally used as a jail and criminal court room. John Moshik was convicted of murder and given the death sentence by hanging. It wasn’t set up correctly and it took three long minutes of agonizing strangulation before he expired. His was the last hanging at the City Hall.

Ever since, the staff and inmates have reported seeing an old man dressed only in boxer shorts. Inmates have complained of him peering into their cells, creeping them out. He’s also been seen by guards and staff walking the halls. Shadows of a man have been seen in inexplicable places.

The old Train Depot was opened in 1892. Today, it serves as a multi-use facility, housing the Lake Superior Railroad Museum and the Duluth Art Institute. Staff members have reported seeing a little girl in a white dress from the 1890s who will suddenly appear and then disappear. This girl in the white dress has been captured in pictures taken at events when no children were present. Paranormal investigators recorded a video showing a hazy silhouette that turned into an orb-like apparition in a train car.

You’ll see Foshay Tower, the first skyscraper built west of the Mississippi. Built in 1929, the owner lost everything in the Stock Market Crash in that year. Urban legend has it that Wilbur Foshay committed suicide by jumping off the top of his own tower. Your guide will explore Wilbur Foshay’s story in depth. You’ll also hear of strange electrical fluctuations and empty elevators stopping at random floors.

You’ll stop at the Hennepin Avenue Bridge. Listen to stories of people who have died mysteriously in the Mississippi River. You’ll hear how the river relates to the folklore of this area. You’ll also stop at the Guthrie Theater and St. Anthony Main Theatre and listen to tales of their haunts.

Hear stories that are chilling as well as fascinating and learn a lot about the history of downtown Minneapolis. And, if you feel a chill creeping up the back of your neck, it might not be just the chilly night air.

Celebrate The 4th Of July In Virginia Beach

Walkthrough of the Oceanfront Country Inn in Virginia Beach

Save on Iowa’s Premier Beer, Wine & Food Expo in Des...