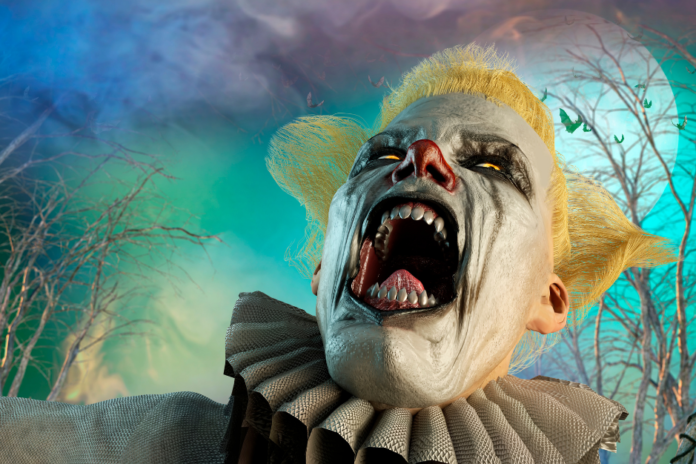 The scariest place to be this Halloween season in Long Island has got to be Bayville Scream Park!  It takes place in Bayville Adventure Park in Bayville, New York.

There are multiple scary attractions here.  We’ll go over a few of our favorites.  And then we will tell you how to save money here with a coupon!

Bloodworth Haunted Mansion used to be occupied by Dr. Bascombe Bay.  He was a twisted scientist who was obsessed (naturally) with reanimating dead tissue.  So, of course, he robbed graves and experimented on corpses, right?  And this continued even after he passed and the estate was left to his twins, Bethany and Bernard.

But Bethany and Bernard went way further than Dr. Bay ever did.  No, instead of just robbing graves, they would kidnap innocent victims, torture them, and perform experiments.  They were hoping to crack the code so they could resurrect their father.  And while they may not have achieved that, they did create an army of the undead.  So that’s something, right?

Anyway, now you’re invited into their manor.  They are hoping to use you as their next test subject.  Assuming you aren’t eaten by their zombified minions first, of course.

Uncle Needle’s Funhouse of Fear was, of course, founded by Uncle Needle.  It was inherited by his great-grand-nephew, Benjamin Bay.  In 1969, Benjamin died on stage in his Uncle Needle’s outfit.  His last words were, “Don’t worry folks. Uncle Needles will always be here.”

And that’s when horrible things started happening at the Funhouse.  We’re talking accidents, maimings, and deaths.  And did I mention the army of sadistic clowns?  The funhouse officially closed in 1971, but people still say they see and hear a man resembling Uncle Needles.  So are you brave enough to enter the Funhouse?

Evil in the Woods

Did you know that there used to be a Bay View Sanitarium for the Criminally Insane?  Only one day it was set for demolition so its 35 unstable, violent prisoners were to be transported to somewhere else.

Only, they never made it to their destination.  The bus was eventually found.  It had been destroyed and burnt deep in the Bayville Forest woods.  The driver’s body was also found.  His body was lashed to a tree and his head was found in another tree.  The transport guards’ bodies were found in an abandoned picnic area.  They had been hacked and slashed apart.  In fact, they were arranged to spell the phrase “No One Gets Out”.

As for the prisoners?  Despite a three-month-long search, a search in which many officers went missing, they were never found.  No one ever found out what happened.  But maybe you can.  You know.  If you are brave enough to step foot into the Bayville Forest.

Did you know that a new steroid was recently created to help enhance human growth?  Yes, it was all part of Project CAGE (Chemical And… Genetic Enhancement).  The intent of the steroid was to be a potential cure for neuromuscular and neurodegenerative diseases.  And they tested this new steroid out on chimpanzees.

Only, the side effects were horrible.  We’re talking rage, hostility, even brain damage.  You might think the tests would end there.  But, no, they then tested it out on humans.  Oops.  These human test subjects saw their veins turn bright green and their eyes turn yellow.  They were full of rage and fury and became bloodthirsty…and cannibalistic!  They broke out of the lab and spread the virus to the rest of the facility.

Now it is time for you to enter the facility to assess the situation.  That should go well, right?

Did you hear about the grave robbers who wanted to take the jewels of the Hybaara cannibal cult?  Well, famed treasure hunter Brewster Bay did.  And he attempted to foil the plan.  Unfortunately, he was unsuccessful.  As a result, the jewels were lifted and a terrible fell upon the land.  And it awoke walking, groaning flesh-eating zombie mummies out of their grave!

Now it is up to you to retrieve the jewels to stop the madness and save our lives.  Only, the thing is, these zombies mummies will not want this to happen.  You’ve got Bay’s journal and a few clues, though.  So you can try to solve the mystery and clean up this mess once and for all!

Looking to save money at the Bayville Scream Park?  Click here and you can get a coupon.  You’ll save 26% on your ticket!