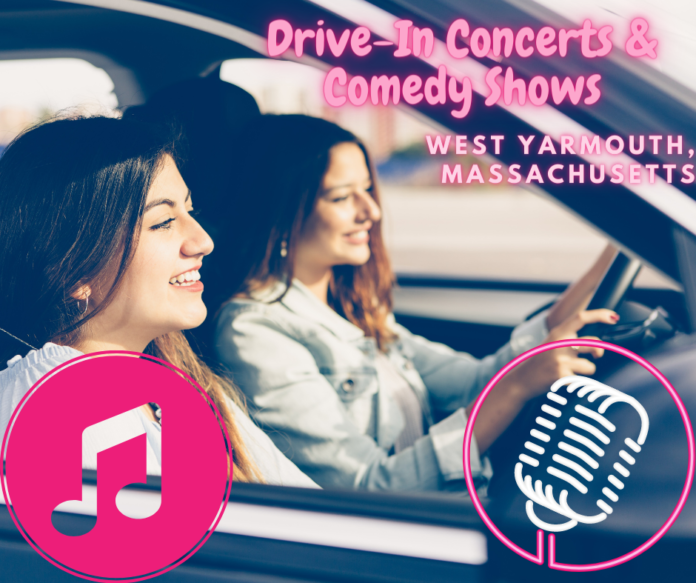 Comedy is funnier when you hear it with people you like.  Music is a lot more enjoyable when it’s shared.

You can watch a comedy show or a music video on your phone and, if you’re into solitary, enjoy it.  But how much more fun is it to enjoy a live concert or stand up comedy with your family and friends!  And now you can do it safely at the Yarmouth Drive-In in West Yarmouth, Massachusetts.

The Drive-In has 3 state-of-the-art digital massive high definition LED screens and a stage.  It is the only venue in New England capable of showing concerts, movies, comedy, and sports broadcasts.  The screens are more than 40 feet wide and can be viewed even during the day.  The audio broadcast is FM transmission so you can listen through your car radio or a portable radio.

Social distancing is enforced.  You’ll be parked in a pod large enough to have you surrounded by vehicles on three sides and be 10 feet away from other patrons.  You can bring lawn chairs or blankets and sit in the pod beside your vehicle.  Masks are required whenever you’re outside your vehicle.

Concessions are contactless.  You place your food order via an app.  You’ll be alerted when it’s ready.  This limits the need for patrons to stand around waiting for their food.

You can find low prices for these concerts & comedy shows here.

Upcoming concerts and comedy shows include

Dark Star Orchestra is a Grateful Dead tribute band.  They’ve performed to critical acclaim over the past 20 years and 2,700 shows.

Comedian Nate Bargatze won both the New York City and Boston Comedy Festivals in 2013.  With multiple appearances on late-night talk shows, he’s in the Netflix special, “The Standups” and the special, “The Tennessee Kid.”

The Lone Bellow is a folk-rock trio from Brooklyn.  You’ll hear selections from their last two albums, “Walk Into The Storm” and “Half Moon Light.”

Vermont based rock band Twiddle use instrument improvisation in their live performances.  Their influences include rock, bluegrass, jazz, reggae, and funk.

Andrew Santino is a stand-up comedian, writer, and actor.  He’s appeared in “This Is Us,” “The Office,” “Arrested Development,” “Deadbeat” and many other shows.  He’s the host of podcast “Whitney Ginger” and currently stars in the FX series “Dave.”

Taylor Tomlinson was named as one of the “Top 10 Comics To Watch” by Variety in 2019.  Her hour-long Netflix special “Quarter – Life Crisis” premiered in March, 2020.

A jam band from Philadelphia, The Disco Biscuit incorporates electronics and rock in their style which has been described as “trance fusion.”

Moe is a jam band formed at the University of Buffalo.  They became popular with improvisational rock fans and Moe fans call themselves “moe.rons”

Save on Lift Tickets on Camelback Mountain in Pennsylvania

How to Get Trimper’s Rides Coupons for Ocean City Trip