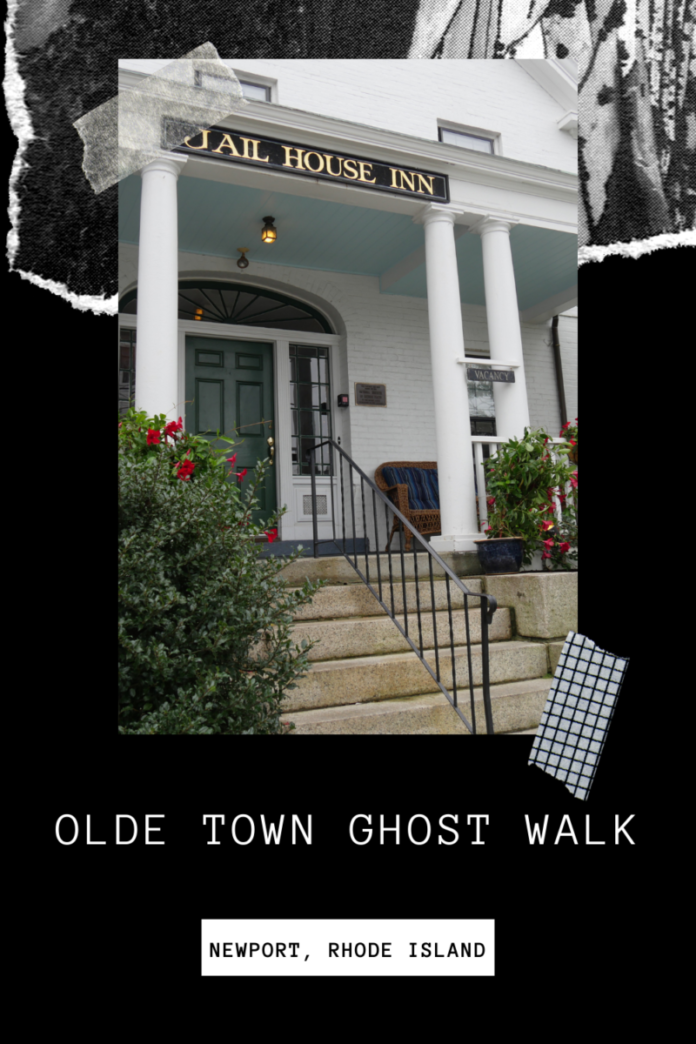 Newport, Rhode Island, is known for its beauty, charm, and paranormal activity.  Newport is hospitable, even to ghosts.

Founded in 1639, Newport is one of the oldest cities in the United States.  Its history includes military action during the Revolutionary War and occupation by the British Army.  There have been outbreaks of smallpox, yellow fever, and the Spanish Flu which killed many of its citizens.  It should not be surprising that there are a lot of restless spirits in Newport today.

Olde Town Ghost Walk will give you a look at Newport’s dark past.  Take a lantern-led stroll down shadowy streets and hear about mayhem, crime, hauntings, tragedies, and the eerie happenings in Newport.

The Jailhouse Inn began its history as a jail, a temporary holding tank for accused people awaiting trial.  Later it was expanded and became the police station and a jail.

Today it is an inn.  A few of the sliding bars and signs remind a guest of the origin of the building.  It is a lovely inn in a historic building.  A great place to stay, but if paranormal activity frightens you, don’t go up to the third floor.

Both staff and visitors have reported feeling a strong presence on the third floor.  They’ll feel a very cool breeze suddenly, even on a hot day, even if no window is open.  For many years, whispers have been heard when no one is there.

The Jailhouse Inn is across the street from the said to be haunted White Horse Inn.  There are those in Newport who contend that the whole block is haunted.  It is said to have something to do with Farewell Street leading into the cemetery.

Opened in 1673, The White Horse Tavern is the oldest continuing operating tavern in the U.S. and the 10th oldest in the world.  It is a National Historic Landmark.  With a history of over 350 years, it is not surprising that the tavern is considered one of the most haunted businesses in the country.

In the 1700s, a man died mysteriously in one of the tavern’s bedrooms and no one knew who he was.  Over the years, there have been hundreds of sightings of a man in Colonial-era clothes.  He’s been seen in the main dining room hanging out by the fireplace.  He’s also been seen in the men’s bathroom.

Don’t be afraid if you hear a little girl crying near the bathrooms.  You’ll have plenty of company.  Many guests have heard the crying but no one has ever seen the girl.  Both guests and staff have felt a hand on their shoulder only to turn around and see no one.  Members of the staff also tell of hearing footsteps from the second floor at the end of a long night when they were locking up after everyone else had gone home.

Many guests have reported seeing a woman walking around the dining room.  She stops by the fireplace and then disappears.  The face of a woman was caught hovering over a table in the dining room in a photo.

You’ll walk through Washington Square.  Public executions took place in the square.  Residents looked on hangings as entertainment.  It really isn’t surprising that some of these lost souls still roam the square at night.

You’ll listen to stories of pirates and ghost ships as you walk through Olde Town.  Your tour will end at the Trinity Church Graveyard.  Hear about the inexplicable activities that have been reported happening there.

Be sure to bring a camera.  There’s no telling what you might capture.

Save on Rent 20th Anniversary Tour in Worcester