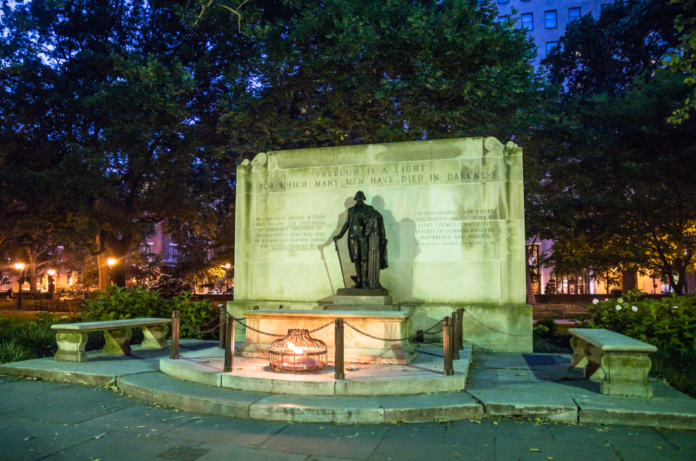 Hear tales and legends of Philadelphia’s darker side. Learn about the more macabre side of Colonial life. Philly Ghosts has a great blend of history, scary and fun.

This ninety minute walking tour will take you through Philadelphia’s Old City, home to some of America’s oldest and most haunted buildings.

The tour will depart from the Tomb of the Unknown Soldier of the Revolutionary War in Washington Square. The Square began as a potters field which was a burial ground for paupers, foreigners and those who weren’t considered fit for a Christian burial. They weren’t given coffins but were wrapped in canvas for burial.

During the Revolutionary War, soldiers that died were buried in Washington Square. Trenches were dug and bodies were stacked on top of each other.

The Yellow Fever Epidemic decimated Philadelphia. Over 5,000 residents perished. Large burial pits were dug and thousands were buried together.

Given all these tragedies, it is not surprising that many of these poor souls are restless. Your knowledgeable guide can tell you of the many sightings of spirits in the Square. A lot of people have felt like they’re being watched by an unseen presence in the Square. Many others have reported seeing a bright light floating through the grounds at night. Still others have heard disembodied whispers and screams at night. Some people have started feeling ill when they enter the Square.

During the tour, you’ll hear about pirates, murders, vampires, grave robbers, public executions, infidelity, duels and so much more.

You’ll see and learn about historical sites including Liberty Bell Center and Independence Hall. The tour will stop at the First Bank of the United States and hear about how Alexander Hamilton helped create it and is now said to haunt it. Hear about the tragedy that led to the haunting of the Bishop White House.

Your guide will tell you about the many sightings of the ghost of Benjamin Franklin. And hear about the Bellevue Hotel. It is Philadelphia’s most historically significant hotel and also its most haunted. Click here if you’d like to check the Bellevue Hotel out for yourself.

How to Book the Tour

Top 5 US Roundtrip Flights for Under $54

Save On Cruises from Boston Massachusetts