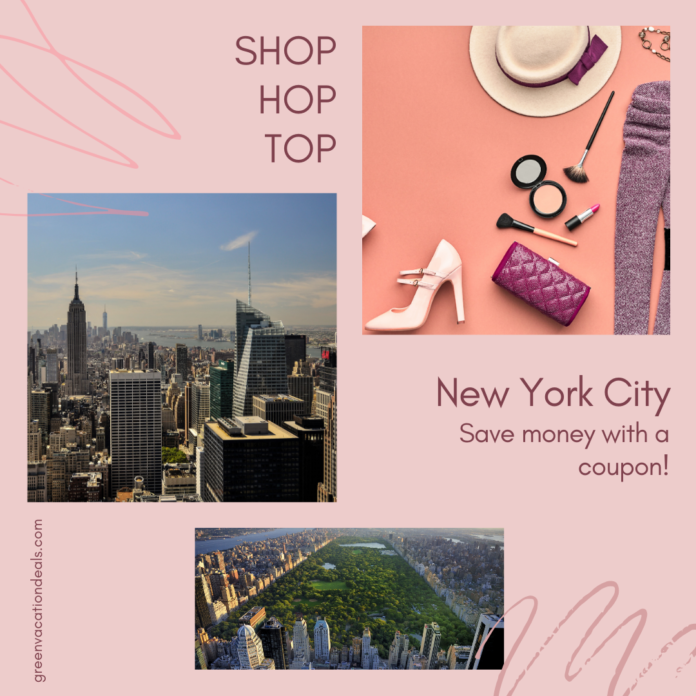 When you think of New York City, you think of shopping and sightseeing, right?  Well you can combine both of those with this Shop, Hop, and Top deal!  It combines three wonderful New York City excursions.  We’ll tell you what these are and how you can save money on it!

Now, I don’t know about you, but I love outlet shopping.  It’s a wonderful way to get a significant discount on top name brands and fashions.  So I love that this package includes a trip to outlet malls!

The best outlet malls in the New York City area is Woodbury Commons Premium.  It’s an hour north of Manhattan.  Here you can find fashions from top designers, children’s shops, stores selling jewelry, houseware, chocolates, etc.  Some of the top brands you can find here include:

This package includes a day trip to the Woodbury Commons Premium, including round trip transportation.

This ticket gives you access to 4 days of a hop-on, hop-off sightseeing tour of New York City!  I love doing hop-on, hop-off tours personally.  First of all, you get transportation around the city.  Secondly, you learn a lot from the narration.  Thirdly, you get amazing views from the top of a double decker bus.  You can get some amazing pictures and videos of New York City from the top of the bus.

And I love the whole concept of hop on and hop off.  Basically, there are certain stops you can get off on.  When you get off on these stops, you can explore the area.  Then you can get back on the bus and resume the tour.  You can stop on as many or as few spots as you want.

And this bus tour takes you throughout New York City.  It loops through Downtown, Uptown, and Brooklyn.

And if you want to get transportation in a non-bus way, check out the Hop-on Hop-Off Ferry Tour.  It’s included for free as part of this ticket!  The entrance to the ferry is the Museum of the City of New York or the New York Historical Society.

Another bonus is the fully-narrated Night Tour.  It gets you amazing double-decker views of the bright lights of New York City at night!  The night tour includes stops at Hell’s Kitchen and Restaurant Row.

Here are the stops on the bus tour

So what does top mean?  Well, it means you get entry into one of the most iconic skyscrapers in New York City!  You get access to the Top of the Rock Observatory!  It gives you amazing views of Central Park, Midtown Manhattan, and the amazing skyscrapers that fill the skyline of New York City.  You get these views from the 67th, 69th, and 70th floors of the Rockefeller Center.

And another great thing about this package is that it gives you some flexbility.  If you would like, you could visit the Empire State Building instead of the Rockefeller Center.  Either way, you will get amazing views of New York City!

Want to save money on these great New York City excursions?  Click here for a great coupon.  You’ll save 21% compared to what you would pay at the gate!

Win A Trip To See The Jonas Brothers In Las Vegas