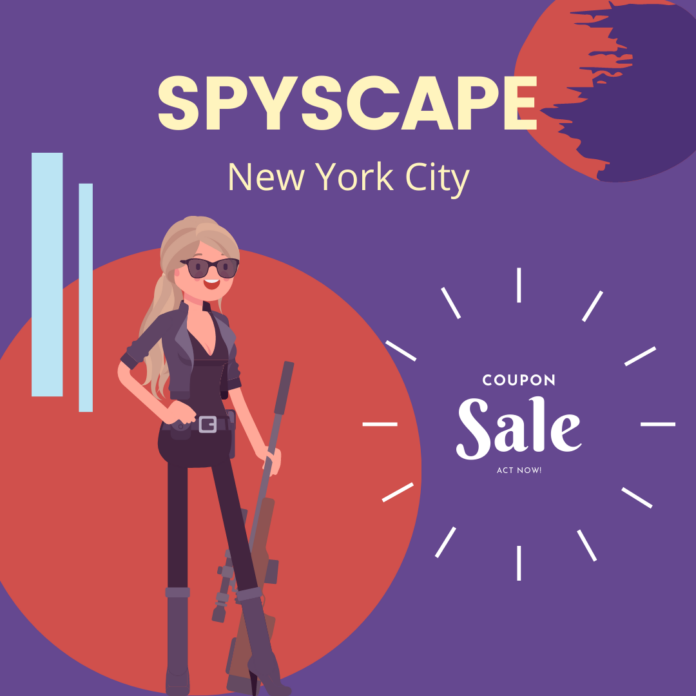 Have you ever thought about what it would be like to be a spy?  Have you ever fantasized about going on a secret mission?

Then I have a great place for you to visit the next time you travel to New York City.  That place is Spyscape!

Spyscape is one of New York’s top-rated attractions, which is really saying something because they have a lot of competition for that title.  But with so many fun things to do there, it really isn’t a surprise.

Let me tell you about some of these experiences and the museum.  And then I’ll tell you how you save money on your ticket!

Feel like you are a spy getting briefed in this immersive audio-visual experience.

This is a high-tech interactive experience where your code-making and code-breaking skills are tested in a dramatic immersive audio-visual environment.

See if your lying and lie-detection skills are up to snuff in the Deception Challenge, which uses facial recognition, audio recognition, and pulse-tracking.  Monitor suspects and see if you can spot the signs that they are lying.

This is an immersive 360° degree experience where your observation and perception skills are really put to the test.

This is a fast-paced, high-tech, laser tunnel experience.  Your agility and strategy skills are put to the test in this challenge.

This is exciting because this is where you get an email link to a full detailed dossier of your own spy superpowers.  It was even developed by a former Head of Training at MI6!

Learn about the Cryptologists who shortened World War II by cracking the German Enigma machine. You’ll find original Enigmas and you can even tap out messages on a perfect replica.  You also get to explore real codebooks and code-breaking devices.  And you’ll learn how encryption affects you today.

At this exhibit, you also encounter cunning devices the CIA has used over the years to deceive foreign governments.  This is also where you’ll find high-tech lie-detection machines.

Learn about the female journalists who used their spy superpowers to free 2,000 slaves. This is where you’ll discover gadgets that let anyone run a personal surveillance mission. This exhibit also explores how governments and corporations use data surveillance on all of us – and at what costs to its citizens and customers.

Learn about the teenager who broke into the CIA.  Come face to face with the signatures behind Anonymous.  Discover the devices hackers use to break into corporations.  See how current hacking groups are trying to change our political landscapes for good…and for evil.

Discover the Stuxnet virus the United States and Israel used to sabotage Iran’s nuclear program.  This is also where you learn about the dark side of the Internet.  By this, I mean DDoS attacks, phishing, and backdoor vulnerabilities.  Also, learn about the role they play in modern cyber operations.

Special Ops is an exhibit where you can learn about the original “Q”.  You can see who inspired the James Bond character and even see some of his ingenious gadgets.  You also get to learn about the brave women who parachuted behind enemy lines to put his devices to the test.

See gadgets that have inspired storytellers for generations like:

People you learn about in this exhibit is the “spy who saved the world” and the dashingly handsome Russian submarine Captain who refused to fire Nuclear missiles at the United States.

You can also see a spy camera from the U2 spy plane, the first pressurized flight suit, miniature cameras, and other equipment from both sides of the Cold War.  Learn about the motivations of spies and the kind of difference in the world that good intelligence can make.

Looking for a promo code to help you save money on Spyscape?  Well, I can get you something even better!

Just click here and you can automatically save money on your ticket.  You can even get a discounted VIP Flex Pass that comes with an exclusive SPYSCAPE gift.  Since the saving is automatic, no promo code or coupon code is needed!

Coupon For Drive A Tank In Mankato, Minnesota

Save On Whiskey Nite In New York City

Save on Wine & Sweets Festival in New York City