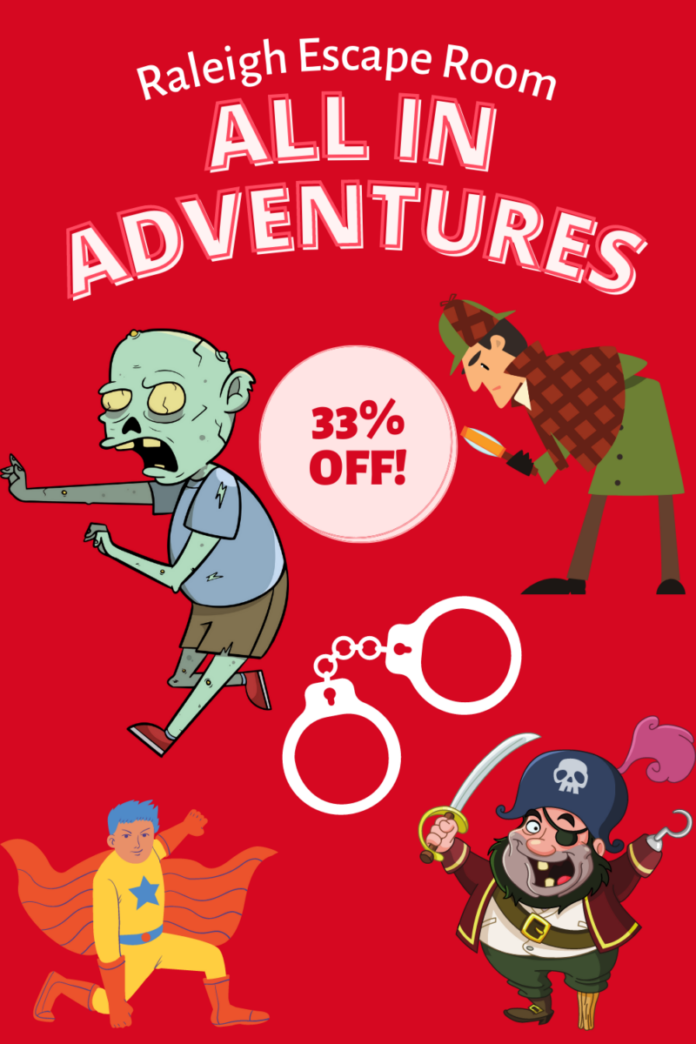 Do you like solving mysteries?  Then you should enjoy a great escape room experience.  You’ll have fifty minutes to find clues and solve puzzles.  It’s a great way for you to work together with your friends, family, teammates, or co-workers.

A great way to have an exciting escape room experience is to go to All in Adventures.  It is located at the Triangle Town Center shopping mall in Raleigh, North Carolina.  It is convenient for those in Raleigh, Durham, Chapel Hill, Cary, Apex, etc.

A neat thing about All in Adventures is that they have some fun, creative escape rooms.  I will tell you about them.  And then I’ll let you know how you can save money on admission to All in Adventures.

Escape From Alcatraz: The Warden’s Keys

The warden’s keys have gone missing at Alcatraz.  And it was on your watch, no less.  So can you and your team find the missing keys before an escape attempt occurs?

Bad news.  You’ve been captured by pirates.  But the good news is that you won’t be walking the plank.  Well, not yet, anyway.  Instead, you get a chance to earn a place on the crew.  But can you do it in time?

Oh, no!  The arch-criminal Matador has stolen the blueprint to the Grand Central Bank.  Now he is threatening to contaminate all the gold bullion.  The stock market will crash if the city doesn’t pay a ransom of $25,000,000 within the next hour.  And since he hid the blueprints in one of the city’s streets, his plan will go through even if he is captured.

So now you must use your superhero powers to recover the blueprint before his minions carry out the plan!

Sherlock’s Library: The Case of the Deceitful Aristocrat

Sherlock Holmes is investigating a series of jewelry thefts targeting the British upper class.  He sends John Watson to investigate the offices of an accountant used by many of the aristocrats.  Watson is under strict instructions to only note what he finds and where and he’s under orders to not remove any of the files.  Can this case be solved?

What starts out as an average day while you are working in a research lab.  But then you suddenly discover the zombification virus has mutated into 2 distinct strains!  Both strains are weaker than the original.  But unfortunately, the majority of the survivors are now only immune to one or the other.

So now it is up to you to quickly find a test to figure out who is immune to which so vaccines can be produced.

Special Agents for the United States obtained evidence against the international arms dealer The Hawk.  Now, your squad is tasked with making the capture.  So you attack the bunker that is identified as The Hawk’s HQ.  But, as you soon find out, it is a trap!

The Hawk isn’t there.  And the location has been boobytrapped and alarmed.  Now it is your mission to disarm or work around the traps and alarms while you search for anything that can help find the whereabouts of The Hawk.

You will start this escape room the same way Houdini began.  You’ll use card tricks and manipulations to complete Level 3 of the game.  If you make it through that level in time, you’ll need to figure out handcuffs and padlocks if you want to escape Houdini’s Magic Cell.

Looking for a promo code to help you save money at All In Adventures Escape Rooms?  Well, we can get you something even better!

Click here and you can automatically save up to 33% off.

Win A Trip To Disney Hawaii Or Disney Orlando

2 Ways to Save Money at Universal Studios Orlando