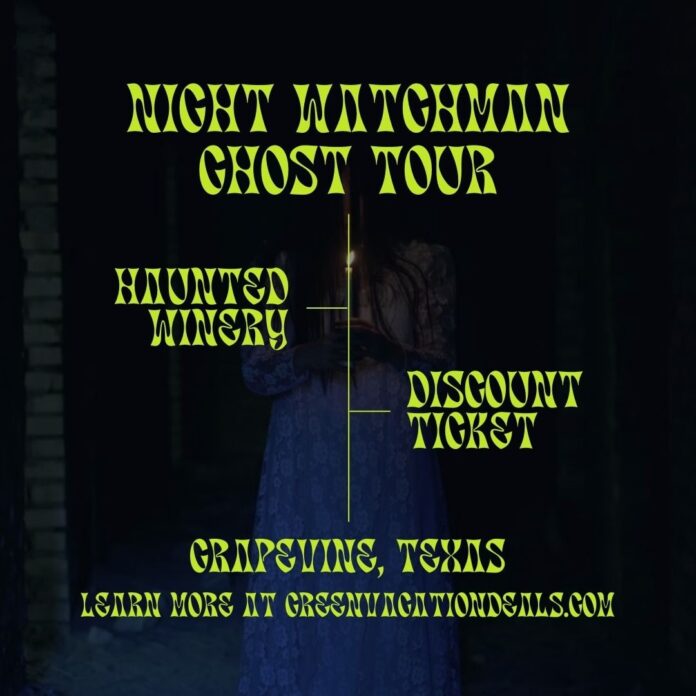 Grapevine traces its roots back to 1843 when General Sam Houston met with members of ten Native American tribes at Grape Vine Springs. They negotiated a treaty of peace and friendship. The Treaty of Birds Fort opened up the area to homesteaders.

The first settlers arrived in covered wagons on the Grape Vine Prairie. The abundance of wild mustang grapes gave the area its name, Grapevine.

The city has grown into a center of commerce and culture. Along the way, it has acquired a reputation for paranormal activity. Come hear the stories and see the “haunts” on a ninety minute walking tour, the Night Watchman Ghost Tour.

Your tour will begin at Grapevine Springs Winery. Their grapes are flown in from Central California. Their wines are aged in American and French oak barrels. They produce dry red wines, dry white wines, 10 different varieties of sweet fruit wines and dessert ports.

You’ll be given a complimentary glass of your choice of wine and the options are plentiful. Those under 21 will receive a glass of grape juice. Carry the wine with you as you walk the historic streets of Grapevine. Hear about the bank robbery of 1932. Learn about the local history, the local legends and the hauntings, past and present.

You’ll see a statue of Grapevine’s night watchman who was once the only keeper of the peace in the town. Each night, he’d make his rounds and patrol the streets with his ever present lantern. Sometimes, after the sun goes down, people have reported seeing a light floating through the air. Could it be?

Grapevine’s “old timers” used to sit along Main Street and watch everything that happened in the town. Have you ever had the feeling that someone was watching you? Maybe they are watching still.

Hear tales of a haunted winery. Which winery is it?

You’ll hear stories of greed, lost loves and tragedies. Are these behind the hauntings that have been reported? I’ve been asking the questions. Take the tour and get the answers.

Be sure to bring a camera. Many of the guests have recorded images for which there are no reasonable explanation.

Win A VIP Experience At A College Football Game