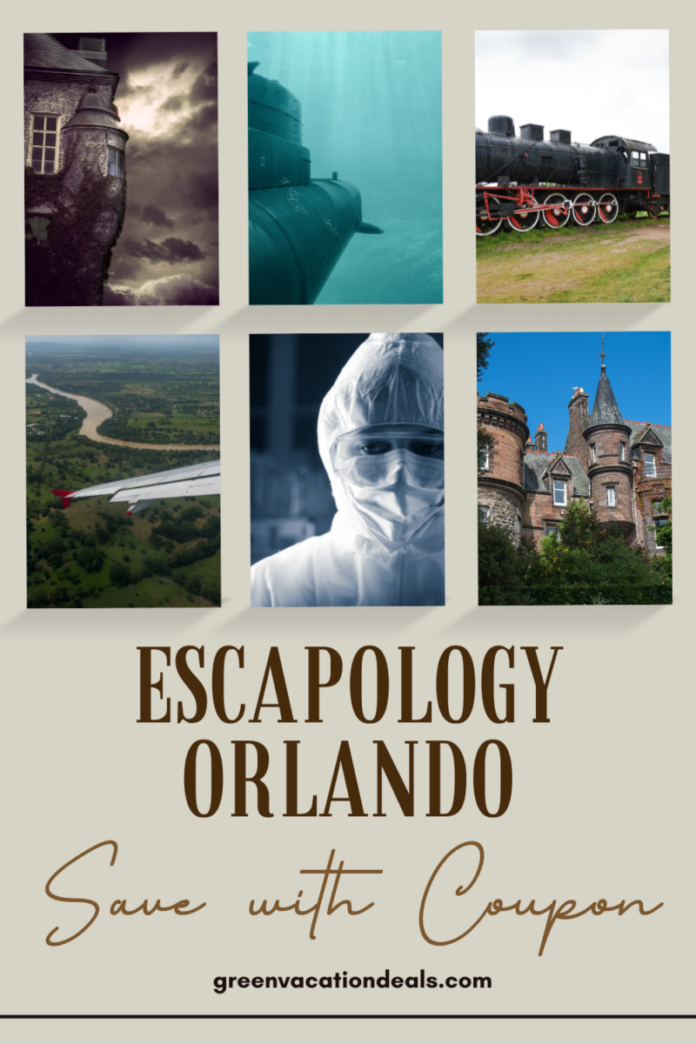 Are you looking for a fun escape room in Orlando, Florida?  Then I have a great option for you!

I’ll tell you about the different escape rooms.  And then I will tell you how you can save money on the experience with a coupon!

Back in the 19th century, a twisted minister at Crickley Church had decided, after listening to the confessions of his congregation, that the members had committed the 7 Deadly Sins.  Therefore, he decided he needed to punish these members.  So during a Halloween service (naturally), he passed around poisoned bread and wine.  As the congregation drew their last breath, the minister cursed the children playing in the rooms beneath the church.  He then buried himself alive in the hidden crypt of the church.  He wanted to haunt the church forever.  And it just so happens that one of those children was your great-grandfather!

And like all curses, there are still problems today from it.  Every year on Halloween, someone related to a member of the congregation dies an unnatural death.  So you realize that your time may be next!

So naturally, you decide to contact the American Paranormal Society.  They tell you the only way to end the curse, of course, is to find the body of the evil minister and drive a sacred dagger through the remnants of his heart.  Only then can the souls of the victims rest in the peace and the curse is lifted.  So obvious you should have probably thought of it, right?

So now you and your bravest friends have decided to race to Crickley, break into the abandoned Church, and then look for the hidden crypt.    But when you enter the churchyard at 11:00 PM, the iron gates immediately slam shut behind you.  Now you are locked inside.  So you now know you need to complete your mission and escape the church.  And you need to do it before the clock strikes midnight!

Since the estate is deep in the Scottish Highlands, you’ll have an hour until the police arrive to arrest you.  So you need to figure out who the real murderer is in one hour!

This is a World War II-themed escape room.  The setup is that you are on a mission with the US Navy in a submarine.  You are to spy on a German Battle Cruiser.

But German secret agents have sabotaged the submarine!  They removed six oxygen silos and hid them around the ship.  You have just 60 minutes of reserve oxygen remaining.  So now you have to search through the mess hall & control room, uncover the silos, repair the submarine, and reinstate the power before your crew perishes.  The states are high – can you do it in time?

Foreign powers have persuaded a high-ranking specialist of the United States government to go rogue.  And this isn’t just any government agent.  No, it is a chemical weapons specialist who is part of a secret department only recognized by a series of mysterious numbers and letters.  So this is a really important guy.  And now he has developed a powerful virus capable of killing people in hours.  So this is a huge threat to not only all Americans but the entire human race.

Now you and your team of scientists must find the only known antidote to virus TS-51 before the enemies get it.  But while you are looking, one of your clumsy team members accidentally knocks over vials of the virus.  Oops.

Now everyone in your team has been infected.  Not only that, but the chemical detection sensor picked up the threat.  So the facility will entirely shut down in sixty minutes, and decontamination will eliminate all biological organisms inside.  So you have just one hour to find the antidote in time before you and all of your teammates are eliminated!

Good news!  Lewis Salinger, a school friend of yours from many years ago, has tracked you down on Facebook.  He invites you on a trip of a lifetime.  Perusing through his Facebook profile, you can see the years have been good to him and he has gotten quite wealthy.  So you are excited about this trip.  It almost sounds too good to be true, right?

Well, you are not far off there.  You think his private jet is going to bring you to the Caribbean to meet him at his mansion.  But instead of arriving in the Caribbean, you land on a private landing strip somewhere in South America.

Once you are at Lewis’s mansion, he explains the purpose of his trip.  Hint: it is not a vacation and Lewis did not amass his money in an ethical fashion.

Instead of the trip, Lewis wants you to take some suitcases he packed back to the United States.  If you do it, you’ll get a million dollars in cash.  The jet will be ready in one hour for you to do it.

The only thing is, that you are not about to participate in this illegal activity.  But when you let him know this, he says you have no choice and then you are moved at gunpoint into a secure section of the house.

But if you act quickly, you could amass enough evidence to give to the police back in the United States.  So you’ll need to act quickly in that hour!

Your mission is to save the crew of the U.S.S. Discovery in this officially licensed Star Trek escape room.

Murder on the Orient Express

It’s not every day you get a chance to solve the most famous crime in history.

But this isn’t just about solving a murder mystery.  No, someone has a far greater death toll on their mind.  Just as you are solving a murder mystery, you discover that a guest has secretly removed the train’s brake system.  Now the Orient Express is gathering speed as it descends the most treacherous part of the route, which is of course on mountains.  Now, projections predict the train should derail on the sharp curve atop the Simplon Viaduct in just 60 minutes.  So you have to figure out who did it in time to save everyone on the train!

Scooby-Doo and the Spooky Castle Adventure

Baroness Maria Richman has gone missing.  Perhaps it has something to do with the rumors of monsters and ghosts in the town of Crystal Cove and nearby areas?  You’ll need to go to the appropriately named Spooky Castle to help solve this mystery in time.

Looking for a promo code to help you save money on Escapology?  I can get you something even better!

Click here and you can automatically save on your ticket.  You can get discounted children and adult tickets.  You can save up to 25% – and since the saving is automatic, no promo code or coupon code is needed!

This discounted ticket is available for the following escape rooms:

Win A Trip To New Orleans

What to Experience at Carowinds in 2019 Including Copperhead Strike