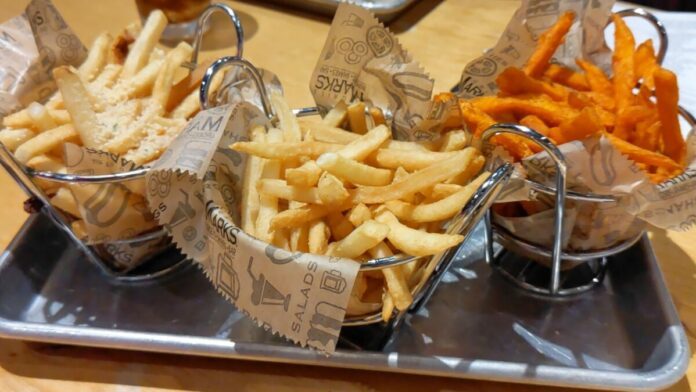 Last week, I visited Columbia, South Carolina to attend the Victory Parade for the National Champion Women’s Basketball Team of the University of South Carolina.  I was staying at SpringHill Suites by Marriott Columbia Downtown/The Vista in South Carolina.  That is because it is within walking distance of Main Street (where the parade was).  And because the hotel has a lot of great amenities.  You can read about this in my full review of the hotel here.

The night my family arrived, we were looking for a good restaurant.  We preferred to find one within walking distance of the hotel so we wouldn’t have to bother with parking.  And so we would be able to order drinks.  When I noticed that Grill Marks was just a short walk from the hotel and had been voted the best burgers in Columbia, I was sold.

So we made our way to the restaurant.  It’s conveniently located on Gervais Street.  We arrived there kind of late.  It was closing at 9:00 PM and it was 8:30 PM.  But they sat us and did not rush us, which I appreciated.

The restaurant has a great atmosphere.  It has a laid-back, fun atmosphere that is fitting of a college town.  It is open-aired at the front but it goes far back.  There are plenty of seats around the restaurant. 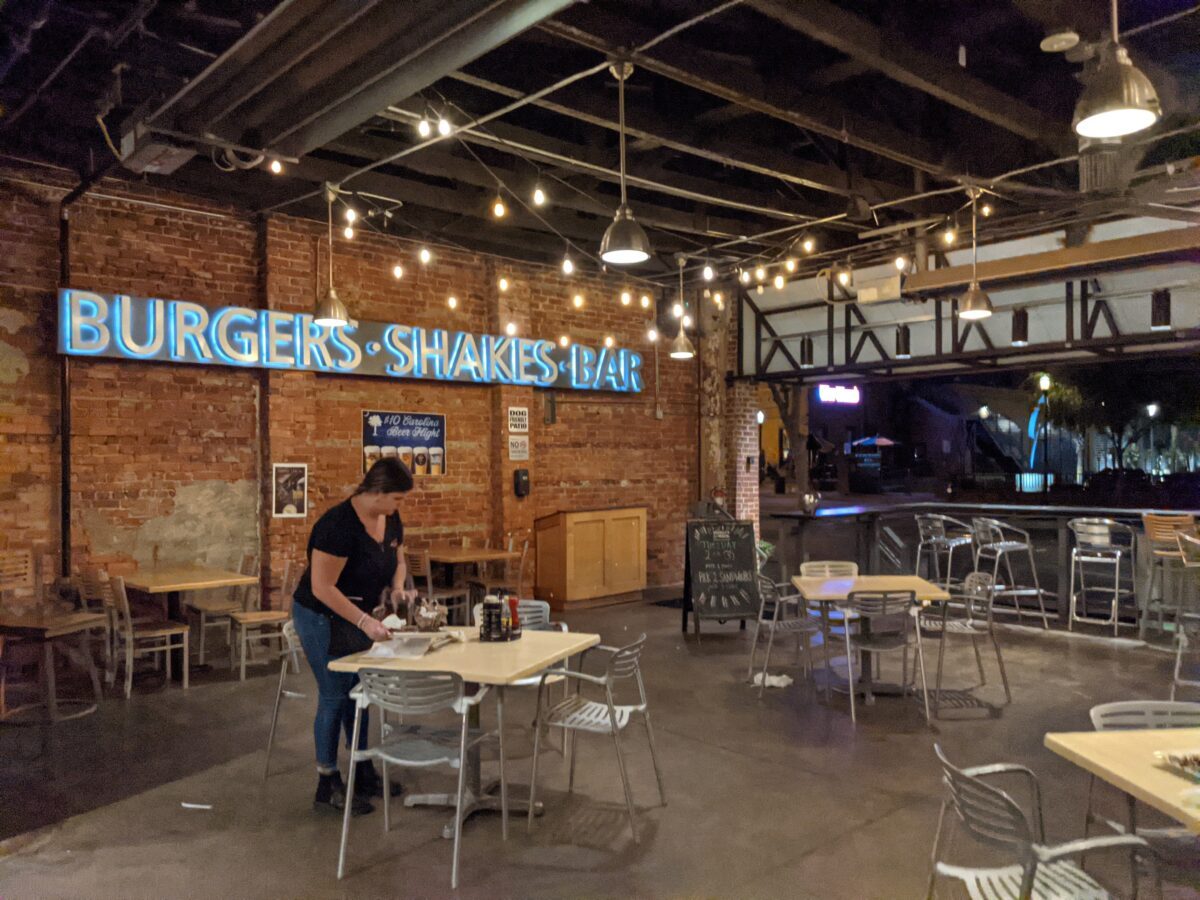 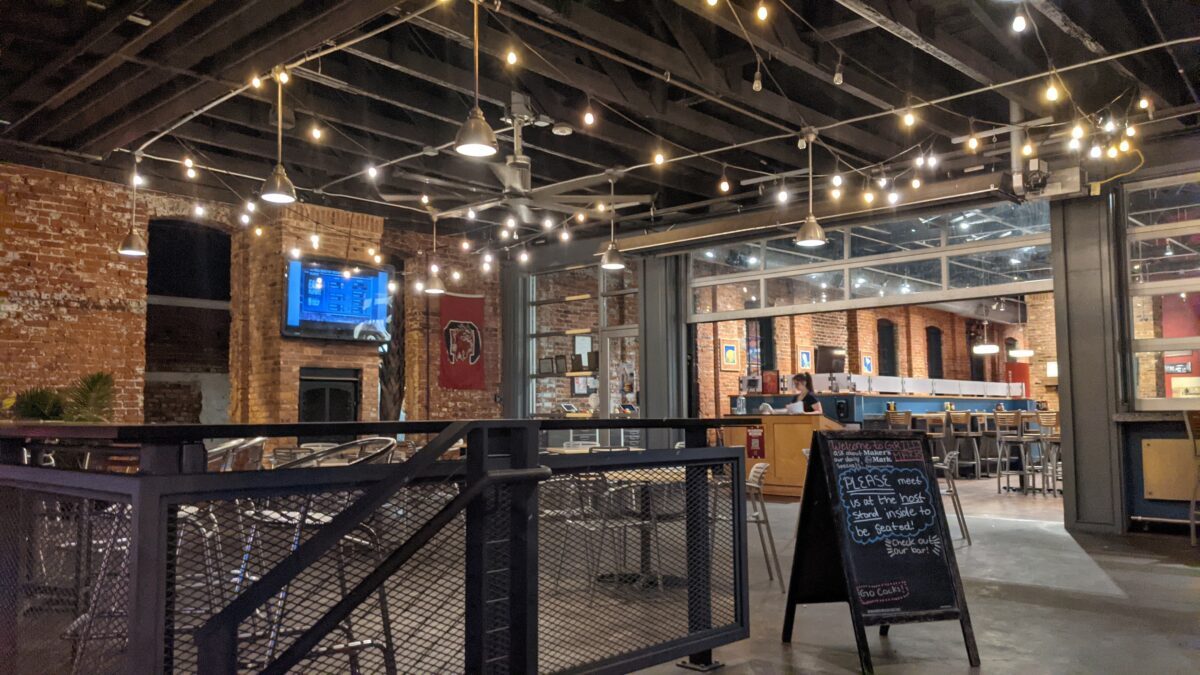 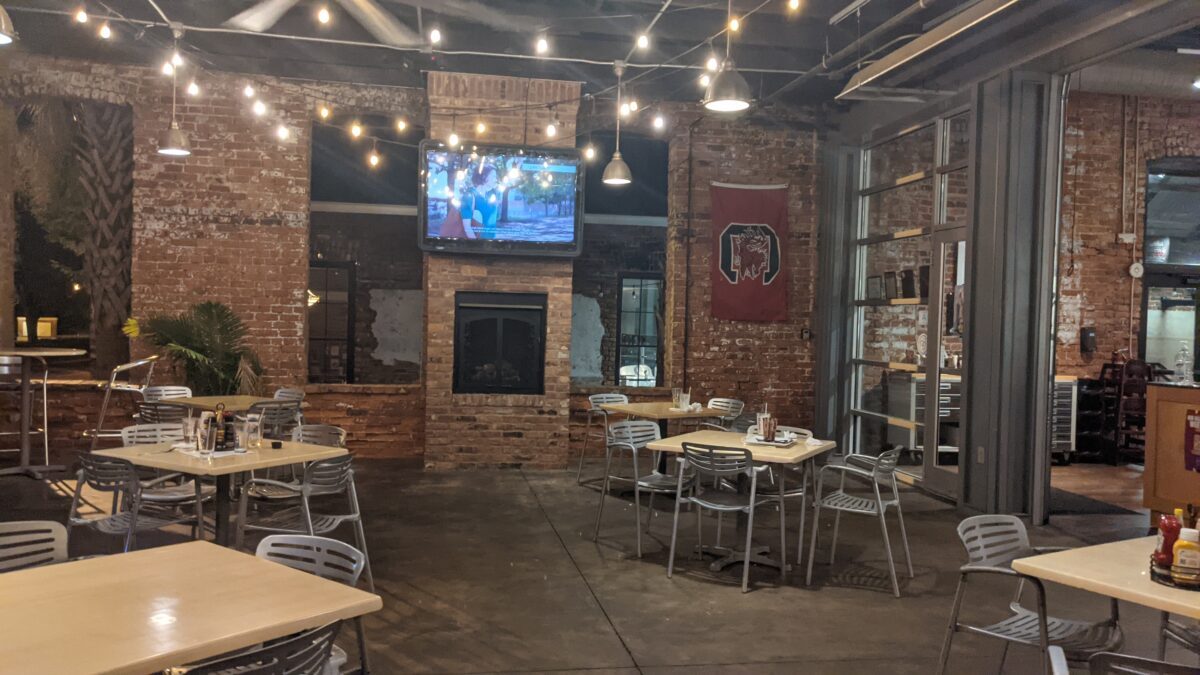 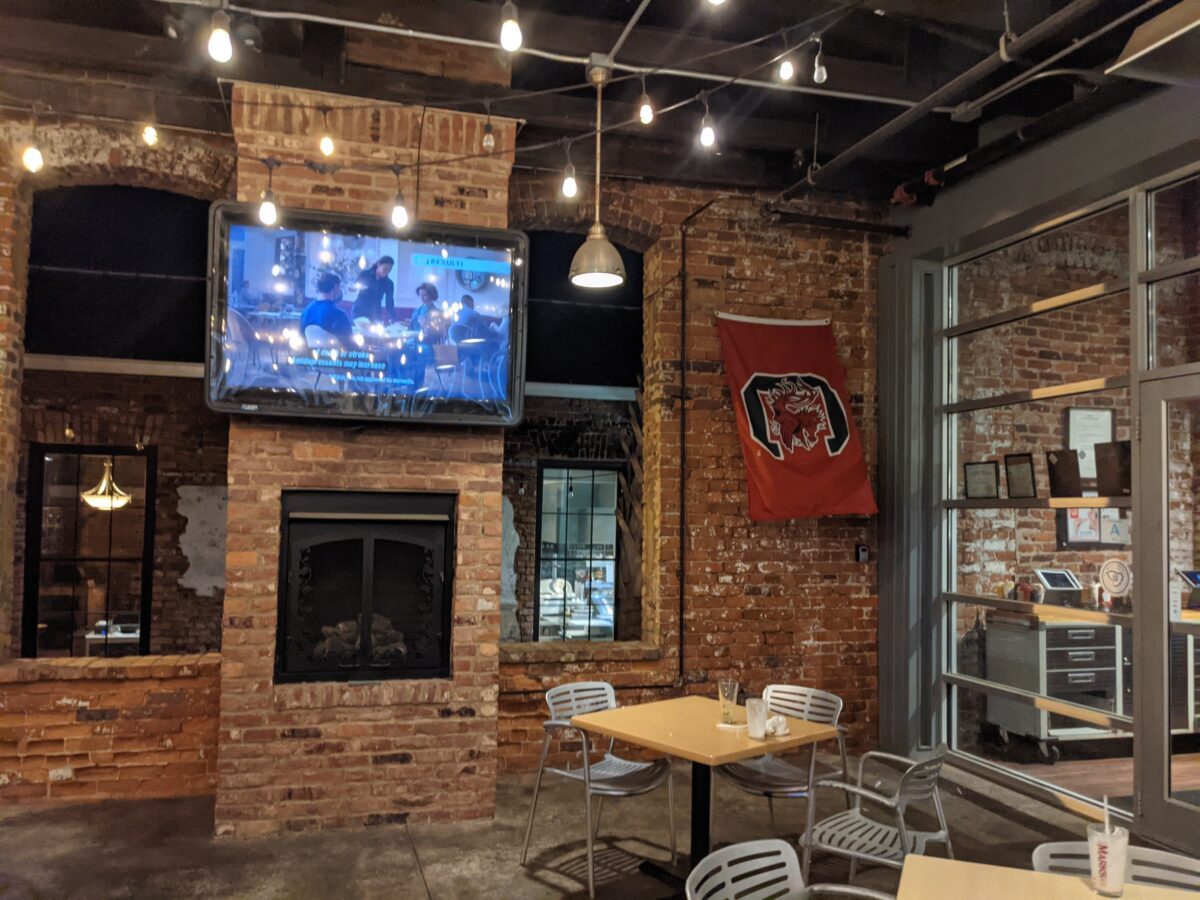 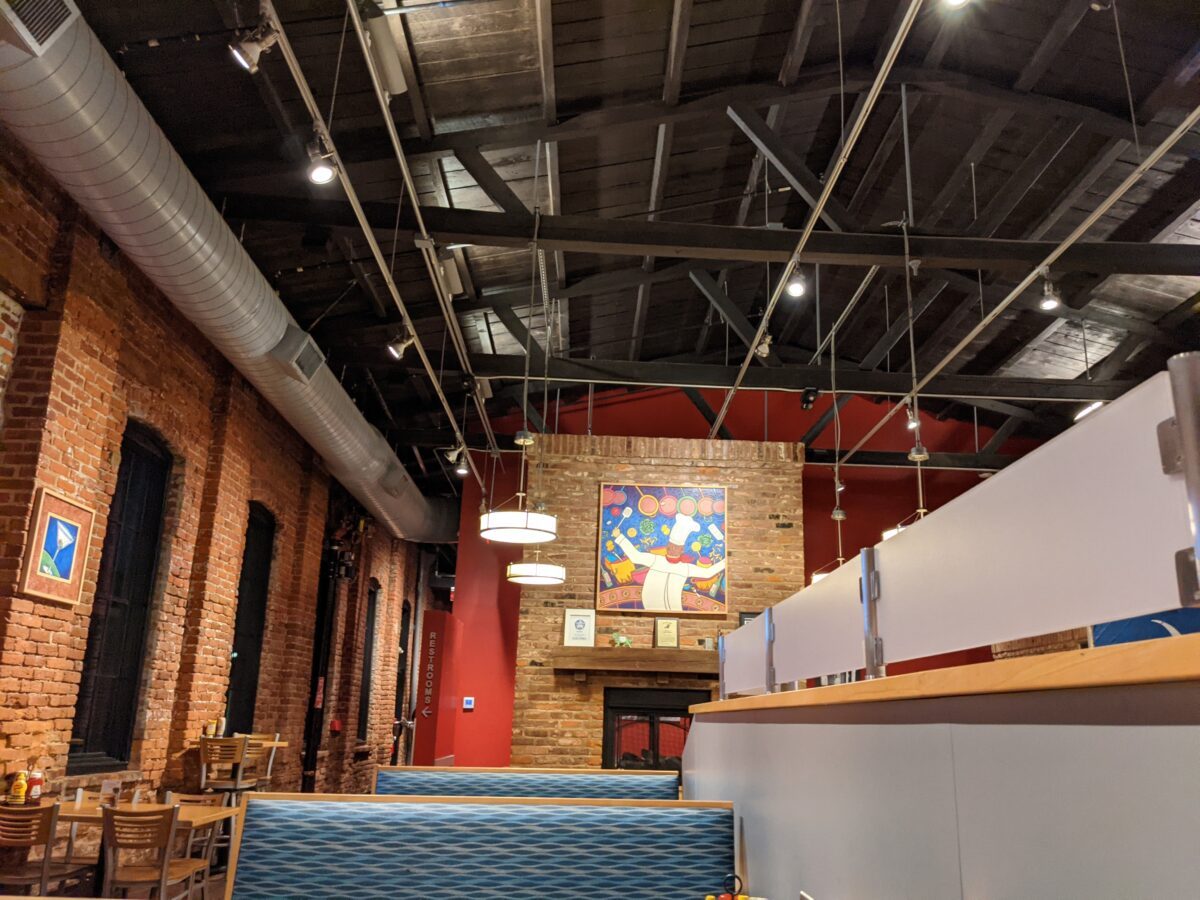 They have a nice bar area where sports were playing on TV. 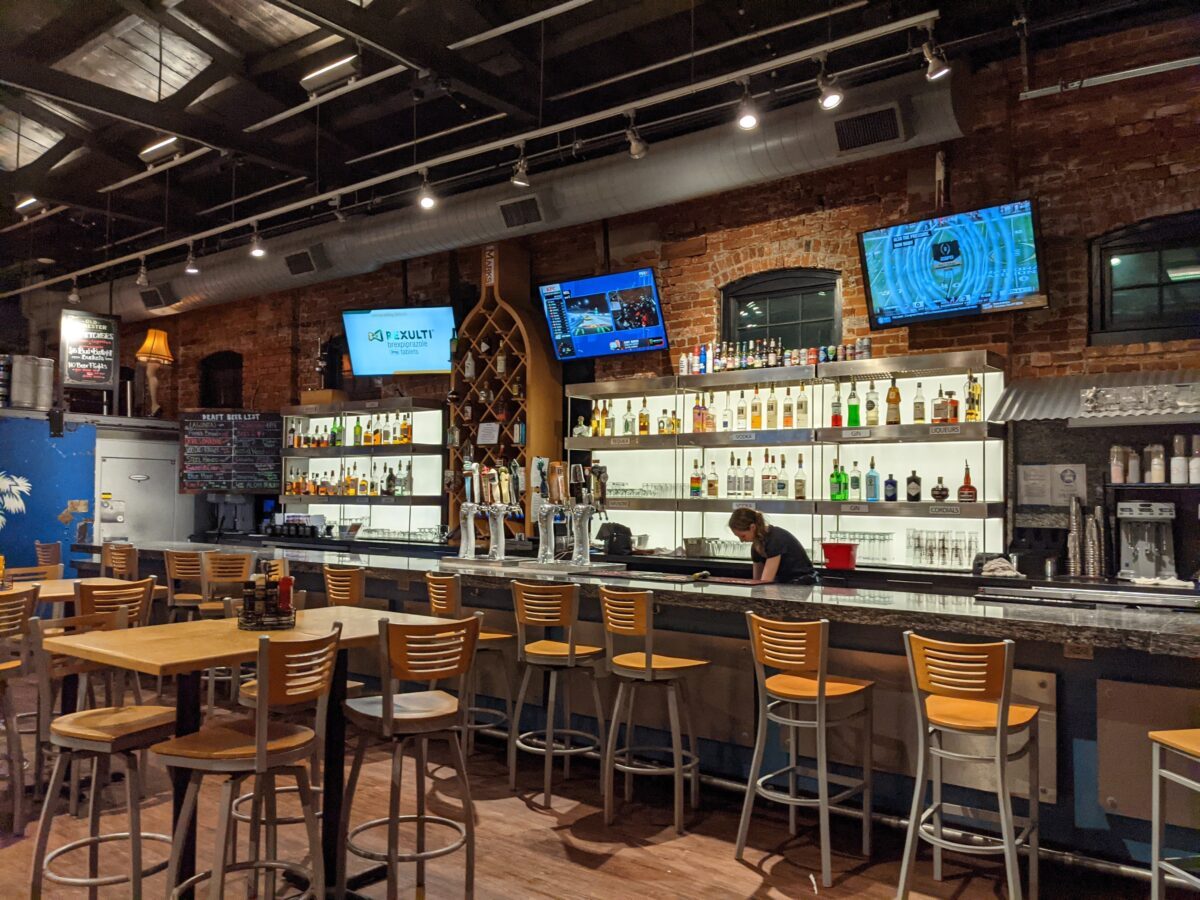 Grill Marks offers a lot of great drinks.  They offer shakes.  And a lot of different kinds of shakes, too.

They have their Marks Famous Shakes.  They are spun with their housemade Madagascar Vanilla Ice Cream.  Flavors include more traditional shakes, like vanilla, strawberry, and cookies n’ cream.  And more creative ones, like White Chocolate Peppermint, Banana Puddin’, and Chocolate Chili Bacon.  The shakes look great, as you can see here. 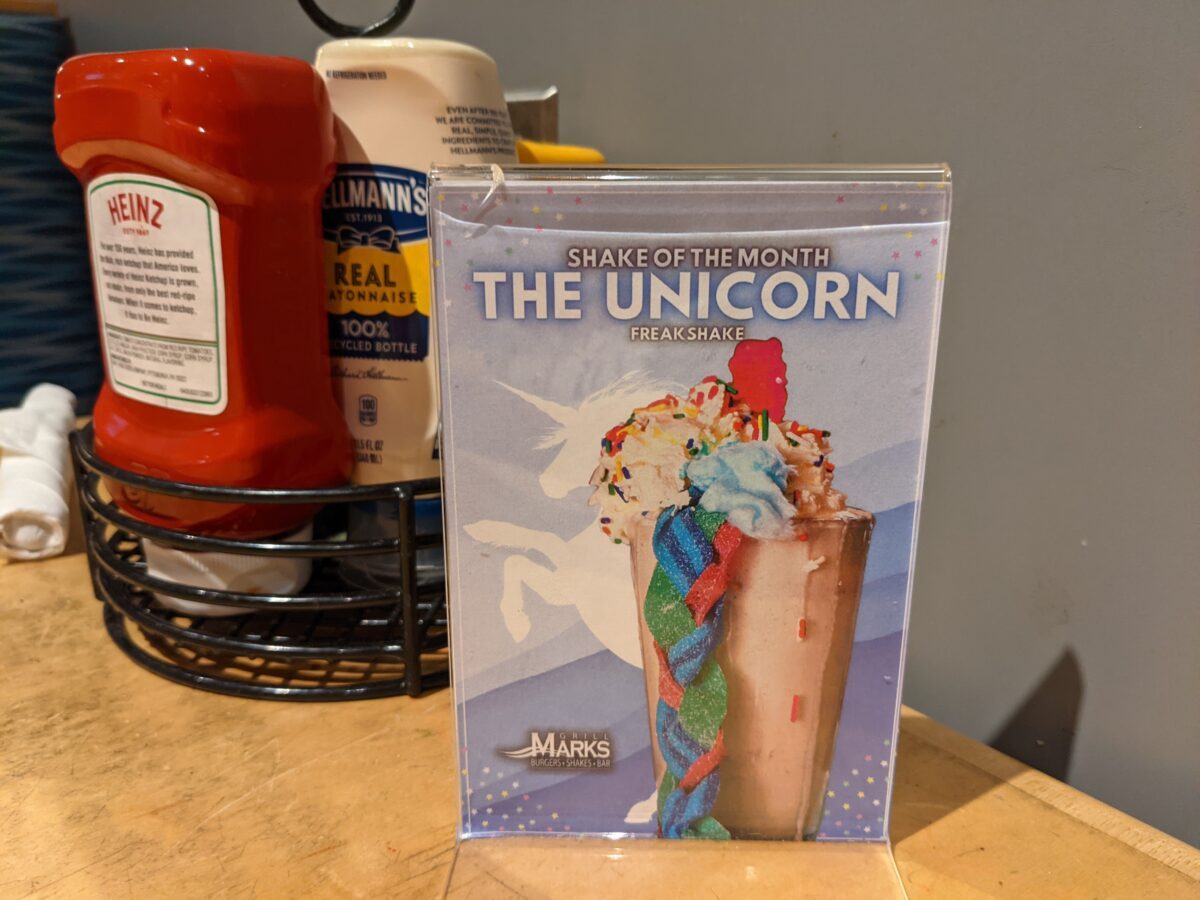 They also have FreakShakes, which have milkshakes, ice cream, whipped cream, and lots of toppings.  Some fun FreakShakes include Chocolate Brownie Crack and Strawberry Cheesecake.

They also have spiked shakes, which are of course fun.  This includes JackHammer (Jack Daniel’s and Pepsi), The Morrison (Jager and Root Beer), Malibu Crush (Malibu Rum and Orange Soda), and Cheerwine Bourbon Smash (Cheerwine and Evan Williams).

We did not have any of these, but we did have wine.  The Pinot Noir was good. 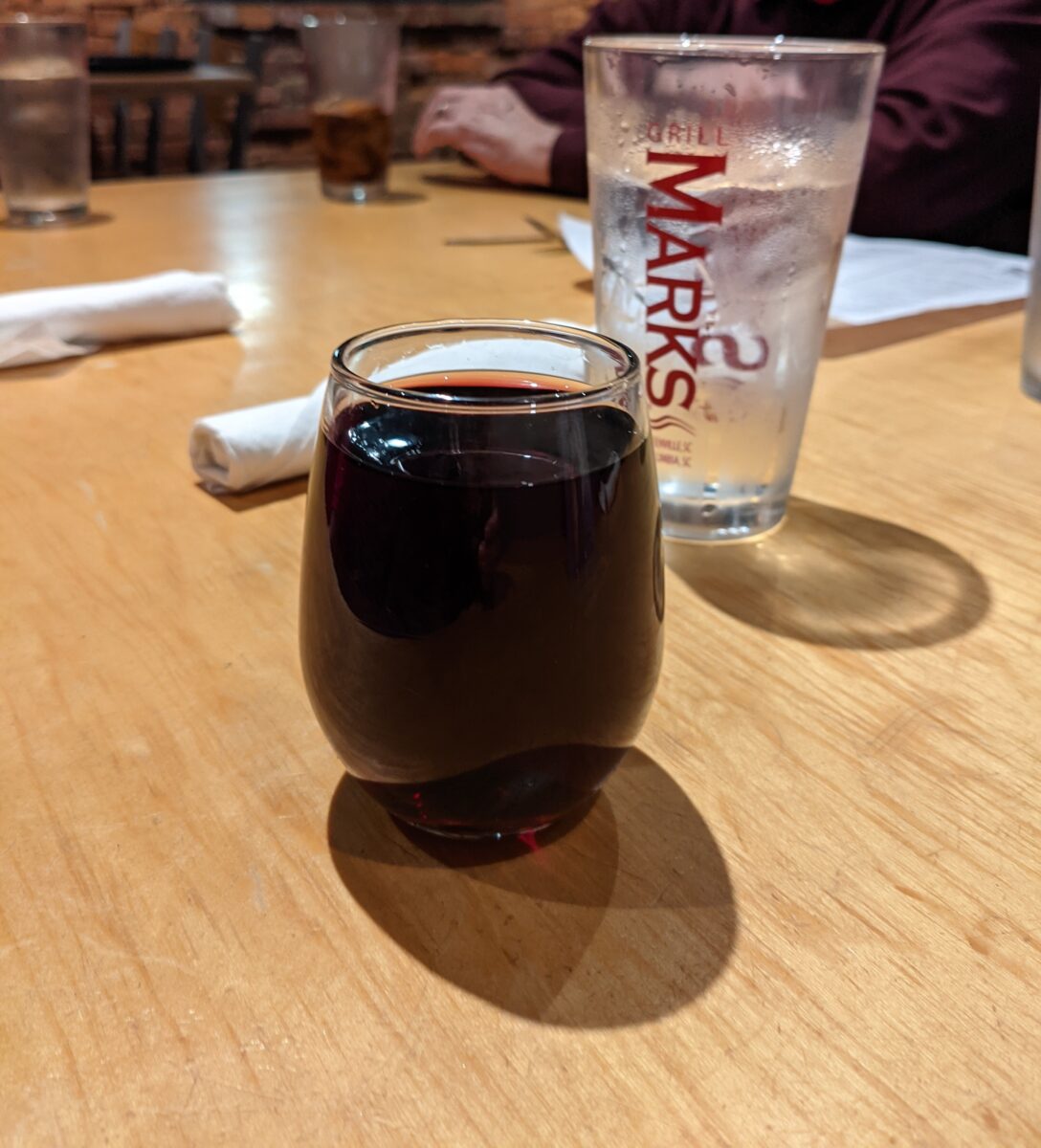 So as I mentioned earlier, the main reason we came here was for the burgers.  And they did not disappoint.

But you don’t have to worry about that here.  You can choose your patty, choose your bun, choose you have a choice of cheese, and then you have a large choice of additions (like bacon, roasted Jalapenos, green chili queso, etc.).

I chose a Brioche bun, added pineapple, and chose bleu cheese.  I was very excited about pineapple because I don’t always eat pineapple and was excited to bleu cheese.

But I was most excited about the patty because I chose bison!  Bison is not available everywhere, so I was really excited I got it.

By the way, all build your own burgers come with tomato, lettuce, onion, and a pickle.  So if you don’t like any of those, make sure you ask to hold those items (I held the onion and pickle).

Anyway, here is what my delicious burger looked like. 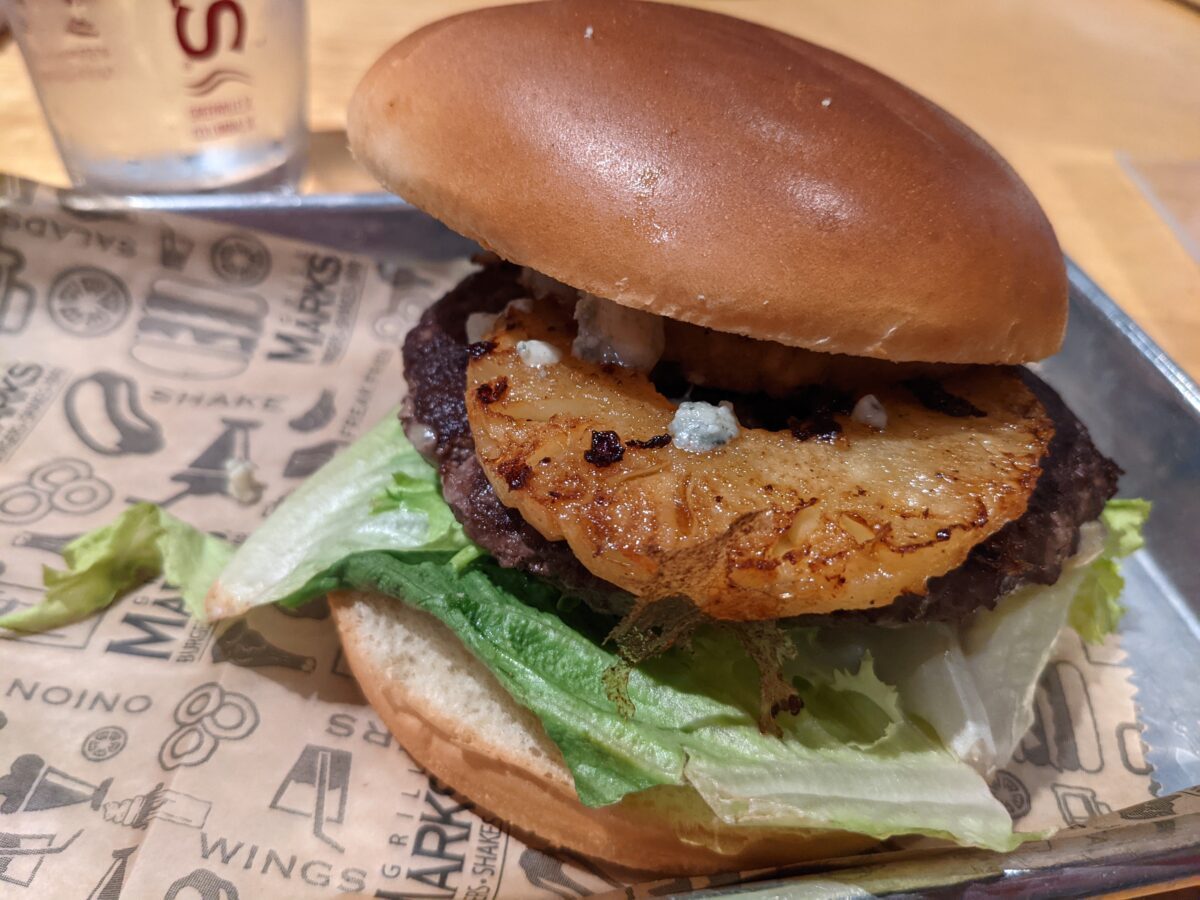 And the burger was even better eating it, too!  The burger was especially delicious.  To me, that was the best part.  The bleu cheese added to the flavor and my favorite bites were the ones with bleu cheese on it.

If I had any complaints, I wish they had had more cheese so I could have cheese on all my bites (if you like that, then you might want to consider getting another cheese that doesn’t come in crumbles, like American cheese or Swiss cheese).

Also, the pineapple was really good, but got a bit overpowered by the bison.  Not to say that was a bad thing, though.  It was more like the bison was just so delicious, that was the overwhelming taste.  And I loved it!  Additionally, the bun was soft and good, too.

Another choice at my table was a signature beef burger wth American, which was also delicious. 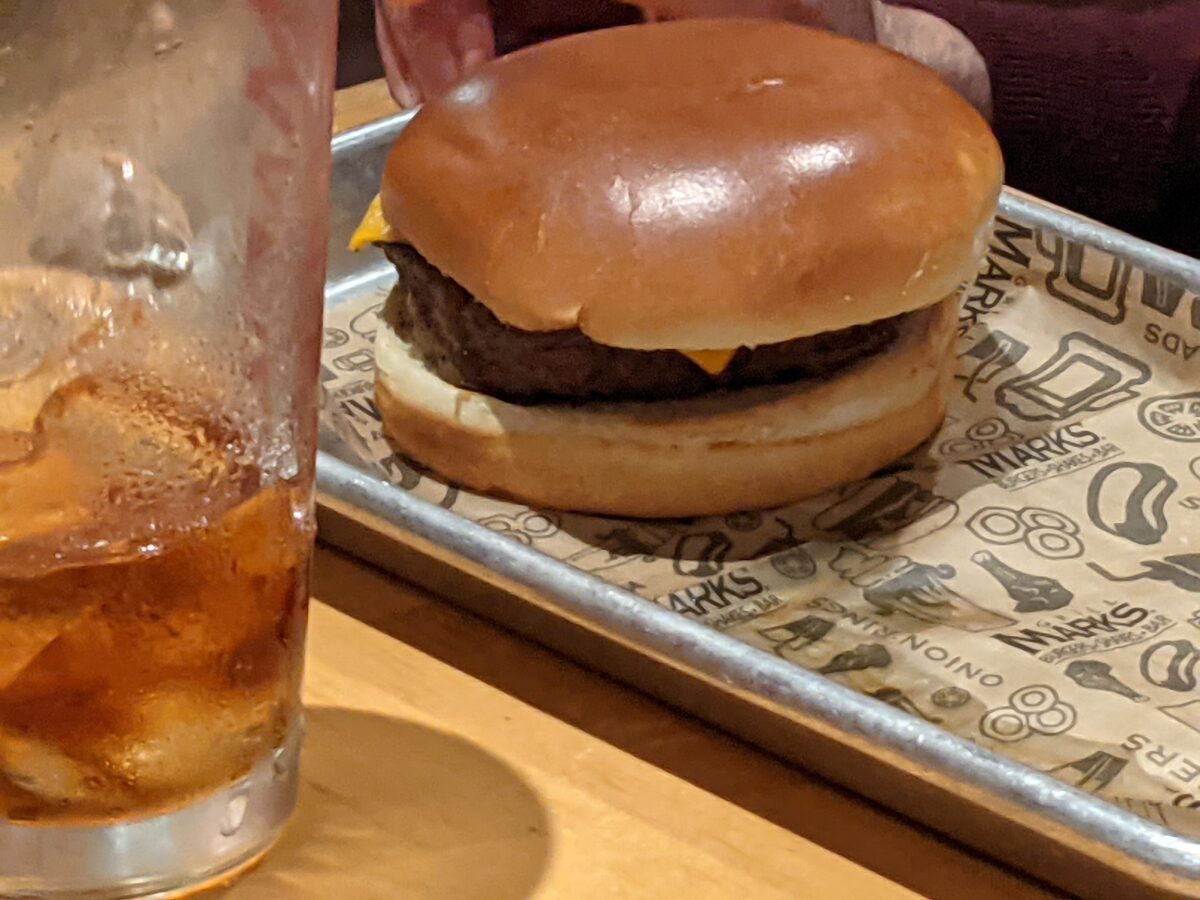 Here is another great burger we got, different from the other burgers.  And that is a signature beef patty with Swiss Cheese and Texas Toast. 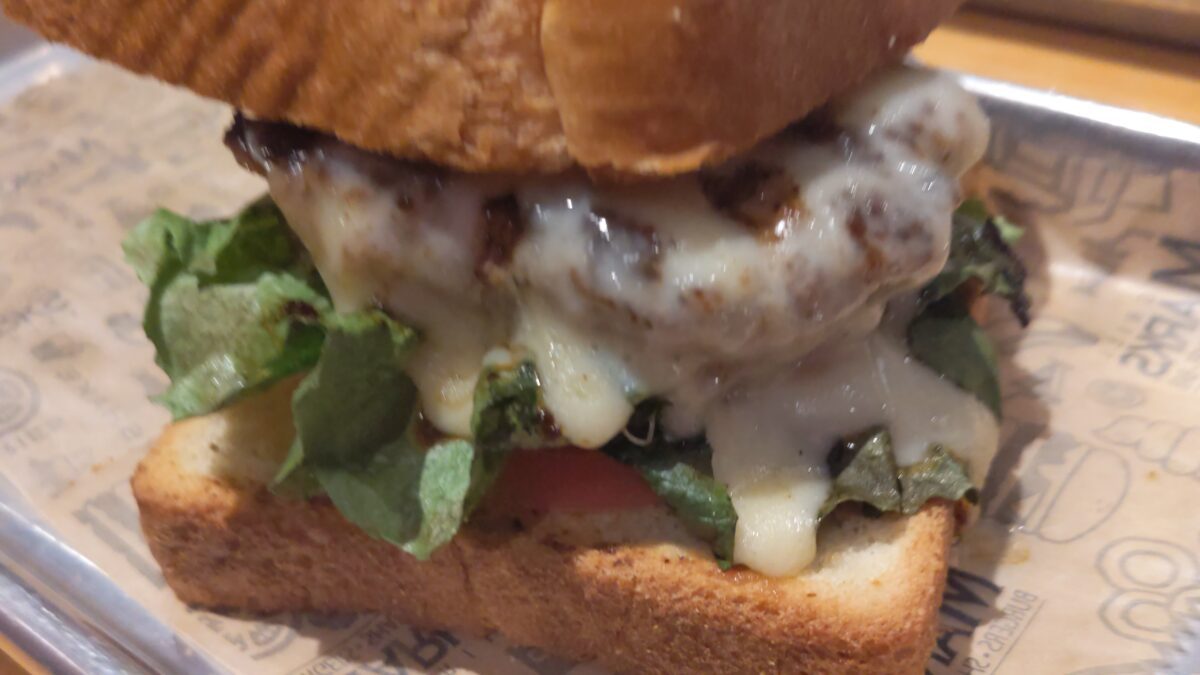 This was a good burger.  The burger itself was once again the best part, with the cheese being the second best part.  I will say, though, that the Texas Toast was disappointing.  The top one, in particular, was a bit hard.

But that was not the case with the other burger we ordered with Texas Toast. 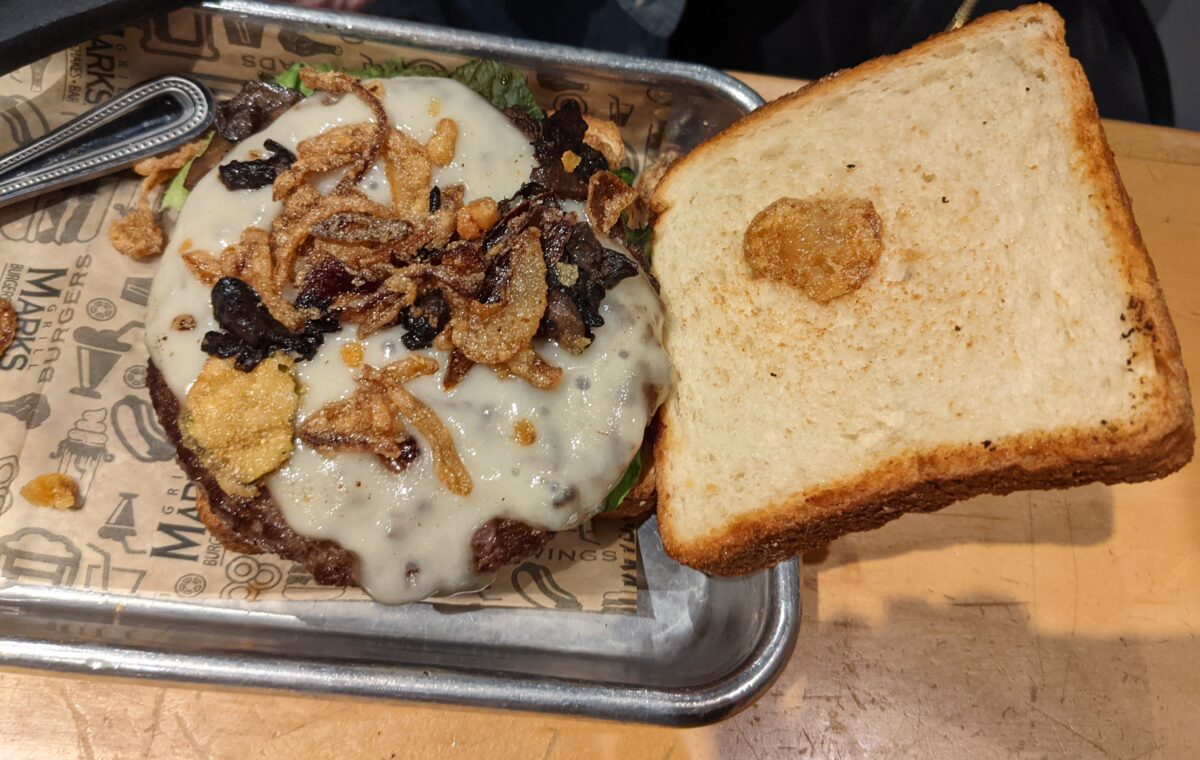 My mother got this and liked the Texas Toast.  She ordered a bison burger with crispy haystack onions and crimini mushrooms.  She said it was the best burger she had ever had in the Carolinas, which of course was huge praise!

In addition to burgers, we really liked the French Fries.  We got the Three Way.  Get your mind out of the gutter; we’re referring to getting three different kinds of Fries for the whole family!  We got Truffle Parm Fries, Skinny Fries, and Sweet Potato Fries.  All of the Fries were so good.  I think my favorite was the Truffle Parm Fries but all of them were great.  The Truffle Parm Fries in particular though had a special, delicious taste.  The seasoning was so good. 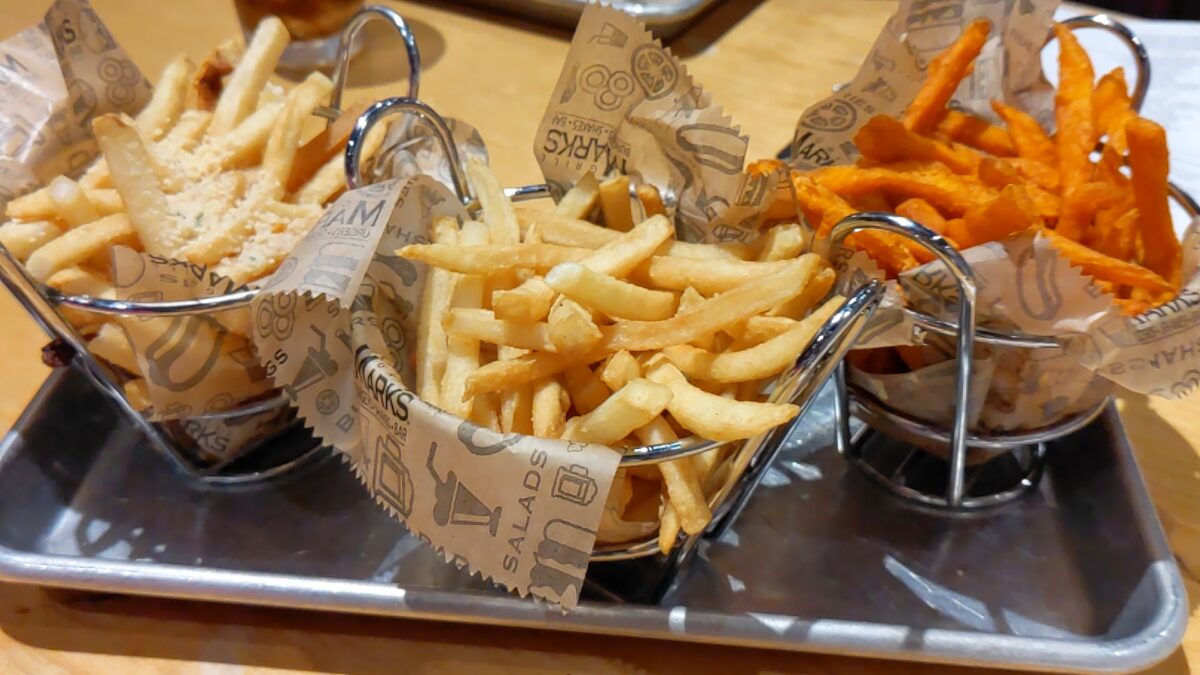 We here at Green Vacation Deals highly recommend Grill Marks.  The food is delicious.  They have a great variety of shakes, drinks, and burgers, and we love you get to customize your burgers with unique features (like getting a bison burger).  So if you are in downtown Columbia, we definitely recommend going.

They also have locations in Greenville, which we haven’t been to yet but we guess you’ll enjoy those, too.  They have one in Downtown Greenville and one at Haywood Mall.  So if you are in Greenville, we recommend you going there, too.

Over Half Off Disney Springs Hotel

Save up to 76% On Caribbean Cruises from Miami