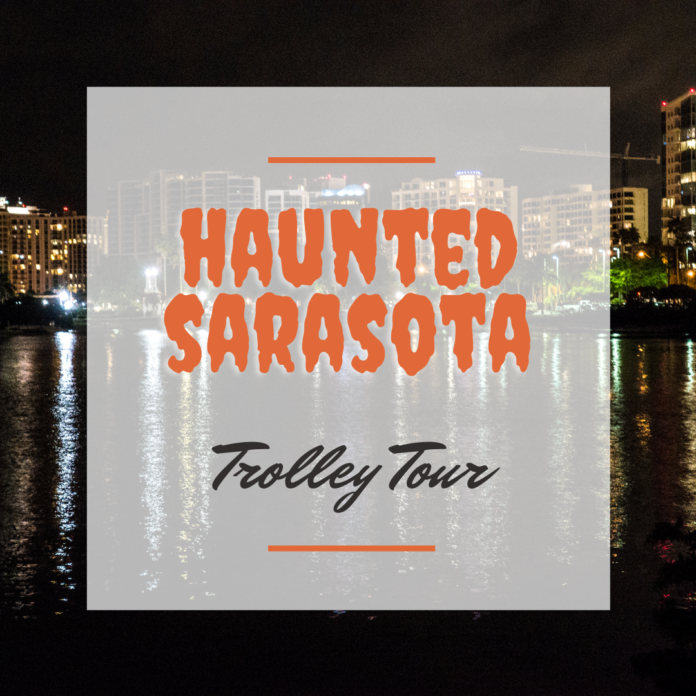 It has been said that Halloween is the time of year when the “veil” between the worlds of the living and the dead is at its thinnest.  The nights are longer, chilly breezes stir the fallen leaves and spirits make appearances among the living.  Was that chill that passed through the air something….from the other side?

Now is the perfect time to go on the 90-minute Haunted Sarasota Trolley Tour.

Your tour includes a complimentary beer or wine at the Trolley Cottage Tiki Bar.  Then hop aboard the haunted trolley for an interactive, fascinating narrated adventure!

Sarasota is so beautiful but it has its shares of skeletons in its closet and Lady Melody, your entertaining ghost guide, will tell you about them.  Be on the lookout for some surprise guests.

In 1921, former Sarasota mayor, Harry Higel, was the victim of a gruesome murder that has never been solved.  Hear about Sheila Bellush whose murder in 1997 inspired the book, “Every Breath I Take” by Ann Rule.

In 1959, 6 days before Christmas, the Walker family were found murdered.  The mother, the father, and both toddlers were all shot in the head.  The case has never been solved.

Your air-conditioned trolley will take you through the downtown theater district of Sarasota which is known far and wide for its paranormal activity.  Learn who’s walking the haunted halls of Sarasota Opera House.  The Florida Studio had so many incidents of spooky happenings, the artistic director arranged for a series of exorcisms.

You’ll see haunted buildings and hear stories of spirits, murder, and unsolved crimes.  Sarasota is said by many to be a spiritual vortex, full of ghostly stories, paranormal activities, and inexplicable happenings.  Come see for yourself.

Save on Hard Rock Hotel Orlando

Coupon For Cuba Nostalgia 2022 In Miami