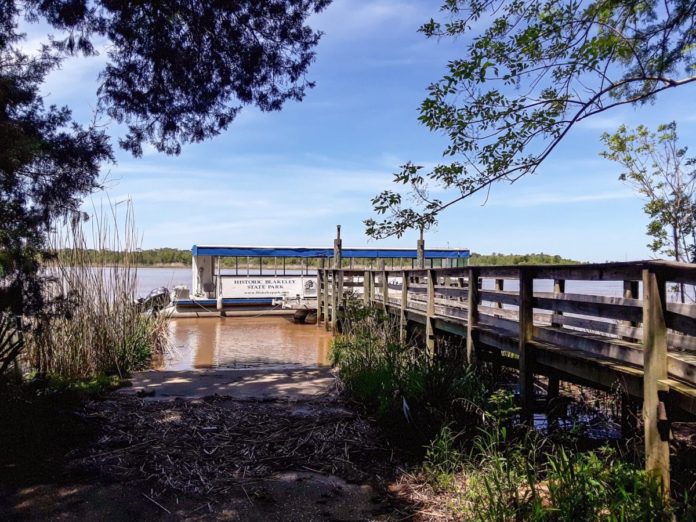 If you like outdoor activities, history and nature you’ll love Historic Blakeley State Park.  Nestled in the Mobile-Tensaw Delta, the park covers more than 2,000 acres of some of the most biodiversity habitat in North America.  The park contains the site of the last major Civil War battle, the ghost town of Blakeley and Native American settlements dating back thousands of years.  It has the rare combination of miles of natural beauty and a rich cultural heritage.

There are driving trails that can get you to the park’s most scenic areas.  The park has over 16 miles of hilly, wooded walking, biking, and horseback riding trails.

There are picnic tables and boardwalk at Blakely River.  There’s a launch for kayaks and canoes.

You’ll find boardwalks in the swampy areas.  Take advantage of them to see lots of wildlife, including alligators, turtles, hogs, egrets, herons, osprey, pelicans, seagulls, eagles, and much more.

Take a walk back in time and see the battleground of the Battle of Fort Blakeley.  This was the last major battle of the Civil War and took place on April 9, 1865, the day General Robert E. Lee surrendered at Appomattox.  Approximately 20,000 soldiers fought that day, including one of the largest units of African-American soldiers in a Civil War battle.  Over 200 men lost their lives and there were hundreds of wounded soldiers.

Historic Blakeley State Park has preserved several miles of breastworks and fortifications from the battle.  See the well-preserved remains of artillery redoubts, earthen embankments, cannon pits, and rifle pits.  There are marked trails and monuments at the site of Fort Blakeley.

Chartered in 1814, Blakeley was one of the oldest and largest towns in Alabama.  Its heyday was in the 1820s when it was a commercial rival to the city of Mobile.  Three Yellow Fever epidemics and malaria swept Blakeley and it is no more.  It is now known as the South’s most beautiful ghost town.

Visitors today can explore the remains of Blakeley.  The historic cemetery is still there and the ruins of the jail.  You can see the outlines of the original streets and the massive oak trees that are hundreds of years old.  According to legend, one of the trees is the “Hanging Tree” used for execution of criminals.

With so many tragedies occurring on this land during the 1800s, it is not at all surprising that paranormal activity has been reported.

Visitors to the park have reported seeing people they could see through.  Others have claimed to have heard voices and seen people dressed in clothing from the 1800s.  A young man in a Confederate uniform named Jeffrey has made his appearance on a number of occasions.  People camping near the cemetery have reported feeling like they weren’t alone.  Others have reported seeing a Union soldier walking around Campsite 15 which would have been in the Union lines during the battle.

Of all the haunts reported in the ghost town of Blakeley, the Hanging Tree is the most famous.  Many people have been frightened by the spirit orbs they’ve seen shining at the tree.  Quite a few orbs have been captured in pictures.

Historic Blakeley State Park offers options for those who would like to stay overnight.

The Carson Horse Trailer Campground has 3 pull-through sites for horse trailer camping and a 6 stall stable.  Each site is equipped with water and power.

There are also tent campgrounds.  Green Vacation Deals can share ways to save money if you’re interested in buying a tent, tipi, or camping cookware.