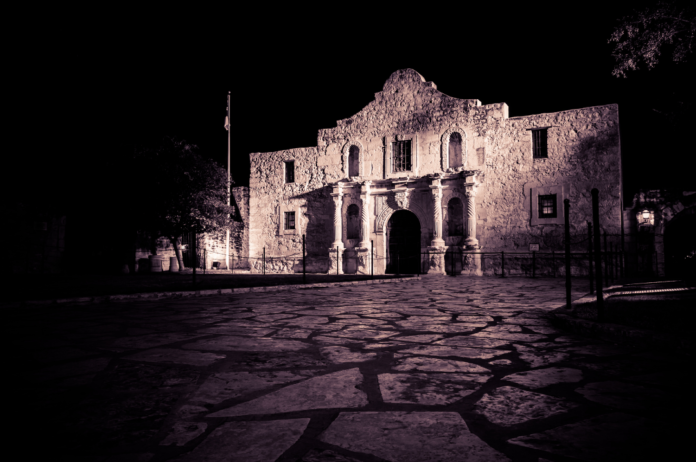 When the subject of haunted cities arises, people think of Salem, Massachusetts, or New Orleans.  San Antonio doesn’t usually spring to mind, but it should.

Founded as a Spanish mission in 1718, the settlers battled with 2 different Native American tribes.  In 1836 in the Battle of the Alamo, General Santa Anna’s Mexican Army defeated and killed all of the Texas defenders.  The United States won the Mexican American that followed but at a terrible price to San Antonio.  Two-thirds of its residents perished in the war.

Perhaps the battles and violent deaths is the reason there is so much paranormal activity here.  It’s hard to say, but San Antonio has an abundance of sad, creepy, and downright frightening spectral encounters.

See the dark side of San Antonio on a 2 ½ hour ghost-themed bus tour.  Your guide will tell you about the city’s haunted history.

The Spanish Governor’s Palace may be one of the most haunted places in the United States.  When the Palace became a private residence, a horrific murder was committed there.  The mother was brutally murdered and the little girl was kidnapped.  When the husband came home to discover this, he hanged himself.  Apparitions of a “lady in gray” and a little girl have been seen and have shown up in photos.  During a paranormal investigation, audio recorders caught what appear to be the giggles of a child.

There is a tree behind the Palace that has been called the “Tree of Sorrows.”  At least 35 criminals were hanged there as punishment for their crimes.  Many have seen dark figures dancing in the breeze around this tree.  Paranormal investigators have caught so many orbs on the tree that they described it as “lit up.”  Apparently, these restless spirits are unable to leave the site of their death.

Twenty-three years after the fall of the Alamo, the Menger Hotel was built on the land used in the fighting by General Santa Anna.  During the Civil War, the hotel was used as a hospital for the sick and the gravely wounded.  Many of the soldiers died there.  Over the years, people were murdered in the hotel, committed suicide, and died of natural causes there.

The Menger Hotel was known as “The Finest Hotel West of the Mississippi.”   It’s also known as the “Most Haunted Hotel in Texas.”

Its most famous ghost is Teddy Roosevelt who stayed there several times.  He is almost always seen at the bar.  His nearly translucent figure just stands by the bar.  Many of the bar staff say they feel like they’re being watched all the time.

While TR may be the most famous spirit, he’s got a lot of company.   It has been estimated that the hotel has 32 ghosts.  Others claim that the number is closer to 48.  There have been many sightings of shadowy figures and translucent apparitions.  Beds have been seen to levitate, rapping noises have been heard and disembodied translucent faces are seen in mirrors.

Like to check it out for yourself?  Then click here to get the best available price.  If you’re really brave, request the King Suite on the second floor….if you dare.

You’ll see the Holiday Inn Express Riverwalk.  The building began its existence as the Bexar County Jail.  The last public hanging in San Antonio was there in 1921.

Ghost sightings are the norm in this hotel.  Staff and guests have reported seeing people who disappear into thin air.  Fluctuations in temperature happen and the temperature in a room can drop as much as 15 to 20 degrees very quickly.  Lights in the hotel flicker or shut off by themselves and there have been numerous complaints of people feeling like they are being watched.

If you’d like to spend the night there, click here for the best price.  You might want to book a room on the third floor.  That’s where the hangings took place.

Hear about San Antonio’s huge Red Light District called the “Sporting District” with its brothels and gambling halls.  You’ll learn about the Alamo and its paranormal activity and haunted railroad tracks.  Hear stories of tragedy, murder, betrayal, heartbreak, and crimes.  You’ll also learn a lot about San Antonio’s history on this entertaining tour.

Win a Trip to New Orleans