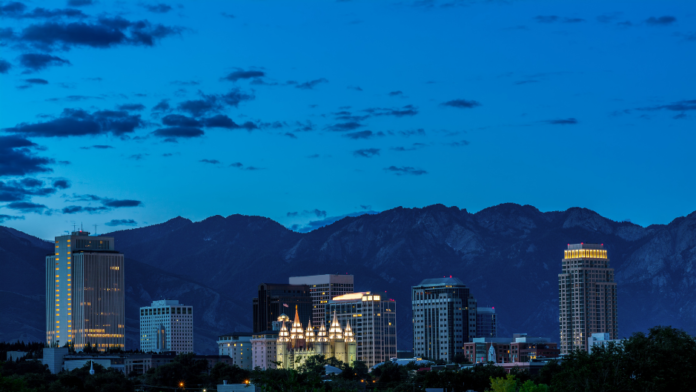 Uncover the dark past and hear tales of Salt Lake City’s haunted heritage.  Take a deep dive into the eerie spirits that prowl the street after darkness falls.  Your guide will chill you with stories you might not want to believe.

These hour-and-a-half ghost tours will take you to the locations of actual haunting.  Learn about phenomena for which no reasonable explanation exists.  You’ll get off the bus at almost all the haunted places.  You can try using paranormal equipment.  You can also take pictures – who knows what you might capture.

On the Old Town Tour, you’ll visit some of the oldest buildings in Salt Lake City, Utah.  The Rio Grande Train Depot is where numerous people have sighted the “Purple Lay.”  A young lady went there to meet her fiance.  He told her the engagement was off and threw her engagement ring onto the tracks.  Running to retrieve the ring, she was struck and killed by a train.

A woman with black hair dressed in a purple velvet dress has been seen, most often in the women’s restroom.  Some people have heard singing, crying, and wailing coming from that restroom when no one is in it.

The beautiful Devereaux Mansion was built in 1857.  It changed hands many times over the years and is now a wedding venue.  An eight-year-old girl has been seen in an upstairs window and will wave at people.  She’s also shown up in pictures taken of the front of the mansion and in pictures taken at wedding receptions.

The Devereaux Mansion also has a woman who seems to be very protective of the house and has been known to throw things in the kitchen.

Hear about the Hoppity Lady who’s looking for her husband.  Visit the largest municipal cemetery in the U.S. and the Old Washington Square.  Be on the lookout for restless souls who still walk these streets at night.

The Outer Reaches Ghost Tour will take you away from the heart of Salt Lake City.  Hear stories about where Ted Bundy lurked when he was stalking victims in this area.

Fort Douglas was established in 1862.  Closed in 1991, it is used as the headquarters for the 96th Army Reserve Command and its museum is still open.  The Fort’s most famous resident ghost is fondly called “Clem.”  There have been a multitude of sightings of a spirit in a Union Civil War uniform.  He’ll appear and then quickly vanish.  There are numerous reports of the sound of footsteps on stairs when no one is there and objects that move by themselves.

Clem is not the only spirit at the fort.  A young woman who committed suicide there in the 1930s has been seen many times dressed all in white.  She’s blamed for the service elevators’ frequent malfunctions.  There have been reports of a woman’s head floating free on Officer’s Circle.  The Fort’s cemetery is also said to have their share of ghosts and then some.

The Alta Club was established in 1883 as a “gentlemen’s” club.  A member fell asleep on the third floor with a lit cigar in his hand.  The cigar started a fire that burned the third floor and killed the gentleman but it’s said he never left.  Many people have reported seeing a man in 1950s clothes sitting on a couch smoking a cigar.

There are also reports of a spirit known as a “lady of the evening.”  She makes her presence known with the scent of lilacs.  If you feel a cold touch on your shoulder but no one is there, you’ll probably smell lilacs.

You’ll also visit the Old Haunted Library and the Hancock Mansion and many more places known for paranormal activity.

Win a Trip to See Kidz Bop Kids in the Hollywood...

Save on Hotels Near Mount Rushmore

Save On Los Angeles Club Crawl