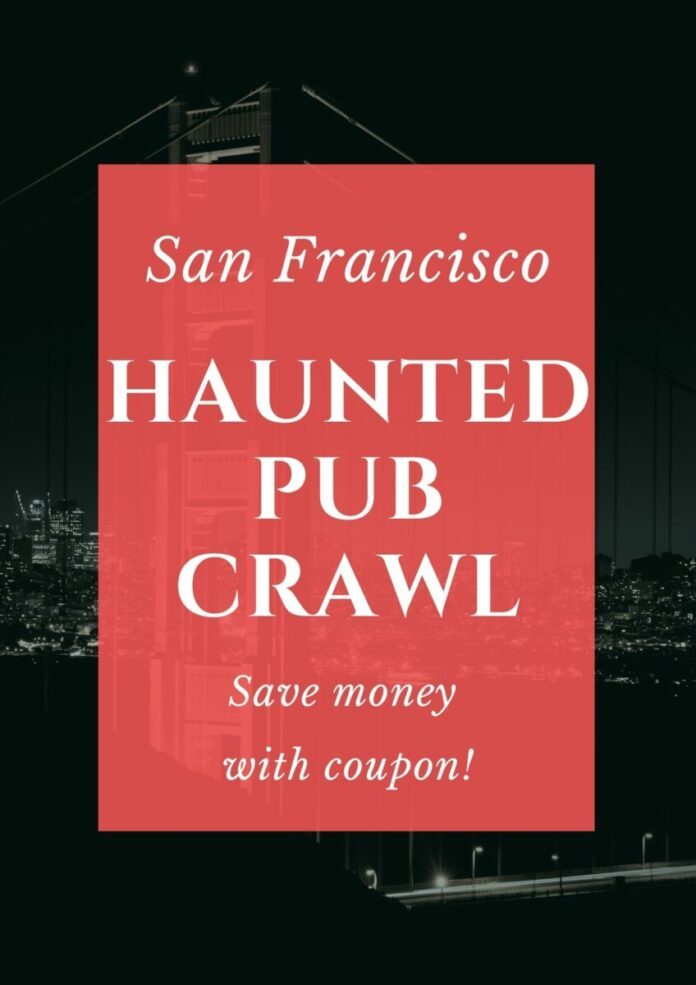 Spend an evening in the oldest parts of San Francisco, a city rich in history and paranormal activity. Have sips of spirits as you hear about the troubled and frightening spirits in the city by the bay.

Your tour will begin at Jackson Square, the only part of San Francisco to survive the 1906 earthquake and fire. You’ll hear about the devastation and heartbreak that followed the earthquake which killed 3,000 people. It is said that souls released in the middle of sudden tragedy often have unfinished business so it shouldn’t be surprising that many of their spirits are still here.

During this two and a half hour walking tour, you’ll stop at several pubs. In 1849, stormy seas caused a ship to go aground on Alcatraz Island. The wreck of the ship was towed to San Francisco’s Barbary Coast and later became a bar, the Old Ship Saloon.  The ship’s gangplank led to an entrance cut from the ship’s side.

You’ll make a stop at the saloon. As you sip a drink (own expense), you’ll hear stories of shanghaied sailors and the vengeful spirits that inhabit the bar’s cellar.

Hear tales of the Gold Rush and the men who moved to San Francisco hoping to strike it rich. During those tumultuous years, more than 100,000 miners died. Most of the deaths were due to mining accidents and disease, but over 4,000 were murdered by other enraged miners. It should come as no surprise that so many lost souls are restless and roam these streets at night.

You’ll walk through Chinatown and hear tragic stories and legends. See the dark alleyways and hear about the apparitions that can be found there at night. Firecrackers are an important part of Chinese history. They are traditionally set off to frighten away ghosts and evil spirits. Ba Gua mirrors hang above many of the doorways in Chinatown. The eight sided mirror is believed to offer protection from negative energy and repel less than friendly spirits.

You’ll hear about San Francisco’s long standing reputation as a place of pleasure and vice, including sex, drugs and gambling. It is said that you can name any vice and you can find it for sale here. Listen to spooky tales of depravity and death. If you feel a chill creeping up the back of your neck, it might not be just the crisp night air.

Are you looking for a way to save money on the Pub Crawl? Click here and you can save $7 (20% discount) on each ticket.

Save On Indoor Skydiving