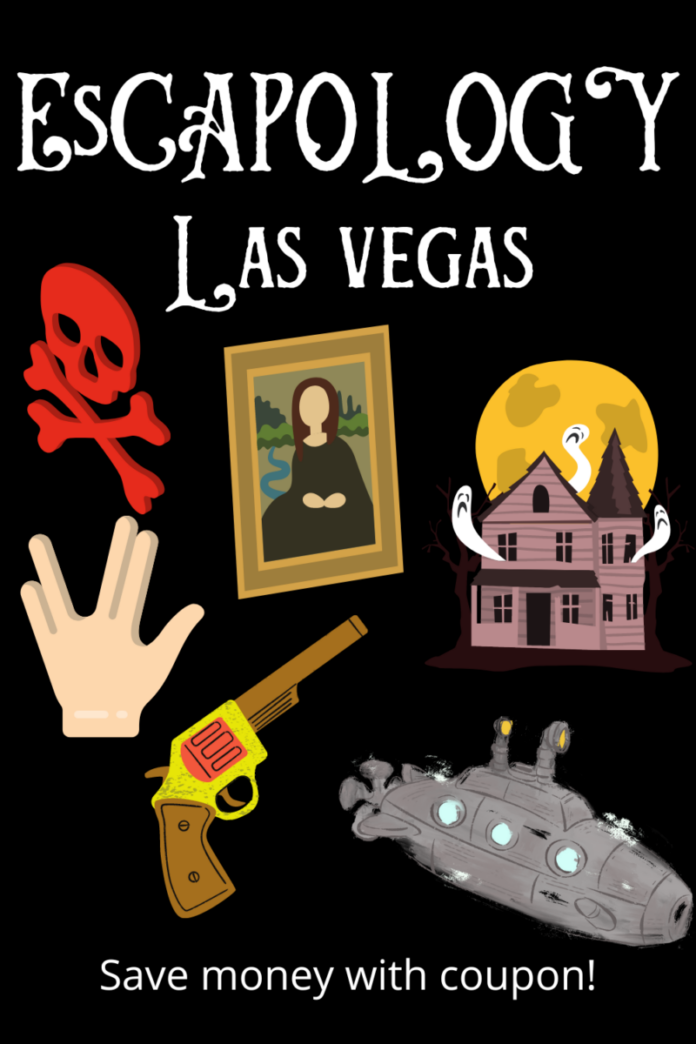 Looking for a great escape room experience in Las Vegas, Nevada?  Then how about trying a TripAdvisor 2020 Travelers’ Choice Award Winner?

Yes, the award-winning Escapology is a premier escape room in Las Vegas, Nevada.  It is a great choice for fun times with friends and family when you visit Las Vegas.  They have creative escape rooms that let you solve puzzles, find clues, and work your way out while working as a group.

We’re going to tell you about the great escape rooms they have at Escapology.  And then I’ll tell you about a great discount you can use to save money on your experience!

But now it has collided with a quantum filament.  This has caused major hull damage, with multiple hull breaches.  Lots of power systems are malfunctioning or they are offline altogether.  The filaments’ quantum resonance has caused a polarity shift in the antimatter containment system.  This has led to a progressive degeneration in the containment field.  And now if field strength falls below 15%, it will collapse.  Not only will this destroy the vessel, but everyone aboard, too!  It is projected to fall to below in 15% in sixty minutes.  So you will need to override its systems, re-establish communications, and repair the antimatter containment field first!

Murder on the Orient Express

Do you have what it takes to solve the most famous crime in history?

The setting is the famous Orient Express.  You are world-renowned Detective Hercule Poirot.  You have already solved the murder of Mr Ratchet, the man who was stabbed to death in his cabin after being proved guilty of abducting and killing Daisy Armstrong, a young child who is the daughter of a WW1 hero.

However, just as you are about to deliver your verdict, new evidence reveals one of the passengers aboard the train has a much deadlier plan.  They have secretly removed critical elements of the train’s brake system.  Now, the train is gently gathering speed as it descends the most treacherous part of the mountainous route.  On its current projection, the Orient Express will derail at great speed on the sharp curve atop the towering Simplon Viaduct in, of course, 60 minutes.  So now you need to find the potential killer and repair the brake lines to stop the train!

Scooby-Doo and the Spooky Castle Adventure

The town of Crystal Cove, as well as the surrounding areas, are being terrorized by ghosts and monsters.  And to make matters worse, the local Baroness Maria Richman has gone missing.  Not only that, but people suspect the recent ghost sightings have something to do with it.  When you go to the Spooky Castle to investigate, you discover a secret Dungeon and Monster Lab in the Castle.  You realize that the person responsible must be in the castle – but you’ll have to figure out who they are from a list of suspects!

The story behind this escape room is that you are Robert Montgomerie.  That is the only remaining direct heir to the Montgomerie family fortune and the Kildermorie Estate.  You attend a family gathering.  It is hosted by your Grandfather, Hugh ‘Monty’ Montgomerie, the 9th Earl of Kildermorie.  The party is to celebrate the dawn of the new Millennium.

But as the guests raise a toast, there is a sudden scream.  Your grandfather is found murdered in the library!

Next thing you know, you’ve been taken to the Drawing Room and the door is locked.  And then you realize, as the direct heir to your grandfather, you are the prime suspect.  And you’ve been framed for murder!

They’ve called the cops.  But since the Kildermorie Estate is hidden deep in the Scottish Highlands, it will take them sixty minutes to get there.

The only evidence proving your innocence is hidden in the mansion.  Hidden clues reveal distant family secrets that help solve the crime.  Now it is up to you to find the evidence before the police arrive and you’re arrested for murder!

The year is 1944, which is the height of World War II.  You are onboard the Steel Shark.  That is the United States Navy’s prized submarine.  You’re deep in the North Atlantic Ocean on an important mission to spy on Scheer, a German Battle Cruiser.  It is a smooth mission.  A smooth mission, that is, until the submarine plunges into the sea!

What has happened is that the engines have died.  Pressure in the cabin is quickly increasing, and the hull is cracking under the pressure.  Without power, only sixty minutes of reserve oxygen remains.

But this is no accident.  You believe German secret agents have sabotaged your submarine.  They removed six oxygen silos and hid them around the ship.  You’ll need to find them to repair the submarine.  Do it and you and your crew can become national heroes.  Fail and you’ll run out of oxygen!

The most famous painting in the world, the Mona Lisa, has been stolen from the Louvre in Paris!  The Louvre naturally has offered a massive reward for anyone who finds, in the amount of $50 million.

As it just so happens, you are in a great position to solve the case.  You just so happen to be an underworld art dealer.  And you believe Vladimir Stepanov, an extremely dangerous Russian billionaire & art gallery owner, is behind the crime.

Now it is up to you and your team to infiltrate Stepanov’s private gallery.  You’ve managed to sneak in, but you don’t have a lot of time to work until the guards find you again.  So you’ll need to work fast!

Nitr0 is the world’s greatest hacker.  He’s successfully completed over 300 cybercrimes.  Despite all this, the FBI has no credible leads to his identity.

Now the FBI Headquarters in Washington, D.C. has just received a video.  Nitr0 informs the Bureau of his nefarious plan to release a virus that will drain one hundred million United States bank accounts of over $75 billion.

As an FBI agent in the Cyber Crime Unit, you want to solve this crime.  Now you get an anonymous lead that Nitr0 has been tracked to an apartment in Cambridge.  You arrive outside what you think is just an average American college student’s apartment.  But the door is locked and a television turns on.  Nitr0 appears on the screen and tells you he was the one who tipped you off about the location!  He has set you up and in one hour the FBI will trace everything back to you in this apartment.

But luckily, you know that Nitr0 always provides a kill code for every crime just in case things go awry. So now it is up to you to find that code, kill the program and escape, all within the hour, of course.

Dr. Walter Brandt is a chemical weapons specialist who works for the United States government.  He is a high-ranking employee who is part of a secret department.  It is so secret that it is only recognized by a series of mysterious numbers and letters.  He has been developing powerful viruses that are capable of quickly eradicating enemy forces with deadly accuracy.

But unfortunately, foreign powers have learned of Dr. Brandt’s work and now they want him to use his skills for evil rather than good.  They have recruited him to develop a powerful virus capable of killing their enemies in just hours.  And Dr. Brandt has decided to go rogue.  He has now become a threat to the United States – and maybe even to the entire human race, too!

Now it is up to you and your team of scientists to investigate Dr. Brandt’s abandoned laboratory.  You guys will need to find the only known antidote to virus TS-51 before it gets passed into enemy hands.

But that’s not all!  During your investigation, a clumsy member of your team bumps into a shelf.  Now vials of the highly contagious virus crash to the ground with one of them breaking.  Now plumes of deadly vapor have gotten into the air and everyone is infected. Not only that, but the chemical detection sensor has picked up the threat and shut down the facility.  Total decontamination will begin in 60 minutes, which will eliminate all biological organisms inside.

Now you need to find the security override code and antidote within 1 hour the facility will self-destruct.  But since Dr. Brandt hid the antidote through a series of riddles, puzzles, and codes, it won’t be easy.  Are you up to the task?

You remember relaxing in Hong Kong harbor celebrating Christmas.  You remember a friendly man befriending you and buying you drinks.

But after that you, your memory gets fuzzy.  The next thing you know, you’ve woken up on board a huge 3-masted 800-ton Chinese ship called the Keying.  It has set sail on a risky journey to the United States and Britain around the perilous Cape Horn.  And that’s when you realize you’ve been fooled by Joseph “Bunko” Kelly, King of the Crimps.  He forcefully drafted you to work with the ships’ company of 12 British and 30 Cantonese sailors.

After weeks on the open sea, in unhealthy, unsanitary conditions, an impending storm comes.  Now the ship has docked on a small island known to the locals as Samui.  You realize this is your chance to escape.  But it won’t be easy.  You and your shipmates have to solve clues, answer riddles, find the hidden map, and then get off the ship.  But you’ll have an hour to do it before the ship sets sail again.

You, Wyatt Earp, three other marshals, your brothers Virgil and Morgan, and your best friend Doc Holliday are inside the O.K. Corral Saloon one afternoon.  You notice five outlaws riding into town on their horses.  This group, which includes the notorious Billy Clanton and Frank McLaury, is heading toward the saloon.  You end up in a gunfight.  Two of your group are injured, but no one is dead.  The marshalls have won!

But here’s the problem.  There are three bodies in front of you.  This means that two of the outlaws have escaped!  Now you have sixty minutes to figure out who’s been shot and who’s on the run before they escape to Mexico.

Looking to save money on your escape room experience at Escapology?  Want a promo code?  I can get you something even better!

Just click here and you can have an automatic discount of up to 30%, no promo code or discount code needed!

Please note that this discounted ticket is not available for the following escape rooms:

Save Up To 77% On Beach Hotels In New Jersey

Save On Hotels Near Death Valley National Park

Save on Cruises from Vancouver

Save on Pizza and Beer Festival in San Diego