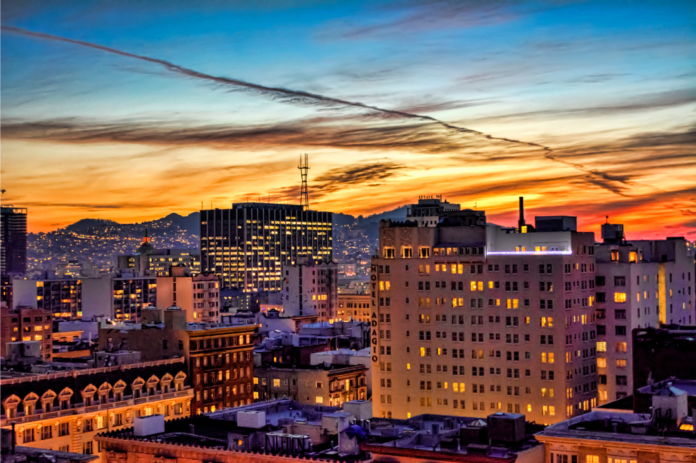 San Francisco is an incredibly beautiful city.  It’s known for its charm, hospitality, and paranormal activity.  San Francisco has a long history, much of it tragic and dark.  The great earthquake of 1906, other earthquakes and fires have destroyed parts of the city and cost thousands of lives.  It should not be surprising, then, that so many restless spirits still roam the streets at night.

Embark on an hour walking Evening Ghost Tour.  You’ll see 8 to 12 haunted sites as you walk through Union Square and the Nob Hill area.  Be sure to bring your camera – you never know what you might capture.

You’ll see the St. Francis Hotel which is said to be haunted.

In 1921, “Fatty” Arbuckle, a top comedic actor, threw a party in three suites on the 12th floor.  One of their guests, Virginia Rappe, was an aspiring actress and model.  She had too much to drink, became ill, and died.  Arbuckle was charged with rape and murder.  The charges were reduced to manslaughter.  The first two trials ended with hung juries and the jury in the last trial found him to be not guilty.  Arbuckle’s reputation was ruined and he never worked again as an actor.

Al Jolsen was called “the luckiest man in show business.”  He was playing cards in the hotel when a massive heart attack took him out in the same room as Arbuckle’s party.

The 12th floor is said to be haunted by three restless spirits.  One is the ghost of a guest who lived in the hotel for years.  She is said to be friendly.  Many guests have reported seeing Al Jolsen sitting at a table, playing cards.  There also have been numerous reports of guests seeing Virginia Rappe roaming the halls, tearing her hair out, and talking about revenge.  Other guests on the 12th floor have reported waking up in the middle of the night drenched in sweat after having horrific dreams.

The Fairmont Hotel overlooks San Francisco from atop Nob Hill,  It location protected it  from the destructive earthquake of 1906l.  Whie the hotel suffered some fire and smoke damage, the main body remained solid.  The original owners of the hotel, Theresa and Virginia Fairmont, were both killed in the earthquake.  Although they died, many believe they still inhabit the hotel.  It is said that souls released in the midst of sudden tragedy often have unfinished business, so it’s not surprising their spirits are still in the hotel.  They are friendly and solicitous of the guests, occasionally giving them a loving caress while they sleep.

A “lady of the evening” has been seen lounging on beds in a red teddy.  Many guests have seen a group of World War II soldiers on the 7th floor.

If you’d like to check this out for yourself, click here to get the lowest price for this beautiful hotel.

More About This Tour

You’ll hear about the devastation and heartbreak that followed the 1906 earthquake which has haunted San Francisco for over a century.  Listen to tales of the gold rush of 1849. You’ll hear stories of tragedy, crime, suicide, and murder.

Book this through Get Your Guide to get the best available price for this tour.

Win a Trip to an Andrea Bocelli Concert at the Hollywood...

Win a Trip to Los Angeles