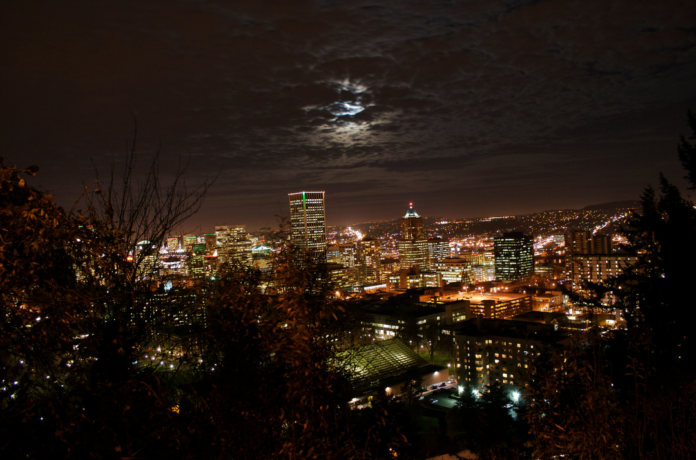 Portland, Oregon, is a beautiful city with a dark past.  Most of Portland’s early history was lawless.  Many of its first settlers were running from authorities in the eastern U.S. and Portland was considered one of the most dangerous port cities in the world.  It had a reputation for being a violent place.  It should come as no surprise that so many lost souls still roam the streets after dark.

Hear tales of tragedies, murder, torture, suicide, and betrayal as you walk from one haunted site to the next.  You’ll get an entertaining look at Portland’s dark and violent past.

You’ll visit the Shanghai Tunnels which run underneath Old  Town to the waterfront.  The practice of kidnapping inebriated men and selling them to ship captains was known as Shanghaiing.  Visitors have reported being touched by a wet hand.   The Tunnels are said to be home to mobsters, bartenders, and kidnapping victims who lurk there in despair.

The luxurious Benson Hotel was opened in 1912 by owner Simon Benson, a local lumber magnate.  It is said that he loved the hotel so much that he never left it.  Dressed in a formal dark suit, his ghost has frequently been seen on the 7th, 9th, and 12th floors and descending the staircase.  A teetotaler, his spirit has been known to spill guests’ alcoholic drinks.  If you’d like to investigate this, pick one of those floors.

Portland’s Old Town Pizza was once the Merchant’s Hotel.  In the late 1800s, a beautiful woman named Nina was murdered by being thrown down the elevator shaft.  For more than 100 years, people have seen her wearing a black dress.  Many people have reported being tapped on the shoulder when no one is there.

You’ll hear about Kell’s Irish Pub and its basement Cigar Room that leads into one of the Shanghai Tunnels.  Learn about the strange supernatural acts used by the spirits that haunt the Portland City Hall.  Hear tales of torture by gangland boss, Frank Woon and learn where he haunts today.

Learn about the Heathman Hotel and the three rooms in which guests repeatedly report paranormal activity.  If you want to check this out, click here to get the lowest price.

The sights you will see and the stories you will hear may make you believe that there is more to this world than meets the eye.

Looking to save money on this attraction?

Book this through Get Your Guide to save up to 10%.