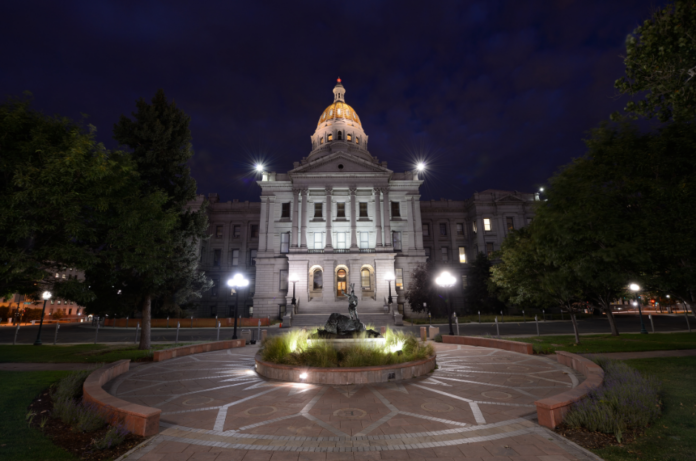 If you feel a chill creeping up the back of your neck, it may not be just the crisp mountain air.  Denver’s wild and dark history casts a shadow over the Capitol and Millionaires Row.

The Twilight Ghost Tour will take you on a walk to see some of the most haunted places in Denver.  Hear chilling stories of scandalous affairs, betrayal, murder, and tragic suicides.

Built in 1889, the Peabody Whitehead Mansion was first home to Dr. W. R. Whitehead, a surgeon in the Crimean War and the Civil War.  The house was said to have been haunted by his past.  He claimed to see apparitions in the house of those he could not save.

After the doctor’s death, Colorado Governor James Peabody rented the house He declared martial law on striking miners, and 2 assassination attempts were made on his life.

The other world activity became well known in 1950 when the house was converted to a restaurant/night club.  There were reports of breaking glass and knives and forks flying around the kitchen.  Food flew off of shelves, a chandelier flickered and it wasn’t connected to electricity.  The cries of a baby have been heard by patrons and staff.

Three different apparitions have been seen regularly.  A young bride, Eloise, haunts the second floor.  An older man smoking a strong cherry-scented pipe appears in the first-floor ladies’ room.  A young woman who hanged herself is seen in the basement.

The Croke Patterson Mansion was constructed in 1891.  It has a long history of paranormal activity.  Phantom noises have been heard and drawers open and shut with no one near.  Office equipment like electric typewriters and copy machines begin to operate by themselves.

Unexplained happenings on the third floor prompted installing 2 guard dogs there.  The next morning, the Doberman Pinschers were found dead on the sidewalk.  They had either jumped through a 3rd-floor window or had been thrown to their death.

The mansion is now The Patterson Inn and you can check it out for yourself.

The Colorado State Capitol has had its share of ghost sightings.  In the 1800s, the Espinosa brothers had murdered over 20 people.  They were killed and beheaded.  Their heads were brought to the Capitol to collect the bounty on them.  Since then, people have reported seeing their heads floating through the building after dark.  People have heard the sound of horses galloping up and down the main staircase and locals say it’s the brothers looking for their heads.

Many spooky happenings have been reported.  When business is done for the day, voices, conversations, and footsteps can be heard in empty meeting rooms and offices.   A female spirit in a long dress has been seen in the steam tunnels and throughout the Capitol building.

Built in 1887, the house of J.J. and Molly Brown has been restored and is now the Molly Brown House Museum and is open to the public.  Tour guides, museum workers and tourists have all reported smelling the smoke from a pipe at random times.  Reports have been made of seeing a spirit in Victorian dress rearranging furniture.  Some claim to have seen the ghosts of Molly and J.J. wandering the halls.  There have been numerous reports of feeling cold spots in random places.  .

Other places with paranormal activity you’ll see include

This is a fun way to learn about Denver’s history and its spooky side as well.  It’s educational and entertaining.  See beautiful mansions and hear fascinating stories.

Be sure to bring your camera.  You never know what you might capture.

If you’d like to read more about this, check out these books.