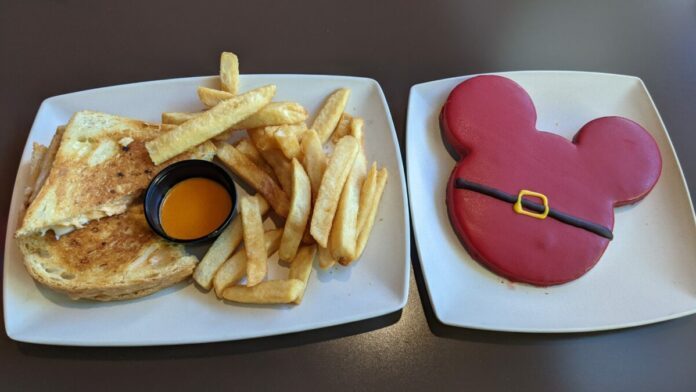 I’ve been eating at the ABC Commissary at Disney World since I was a kid. Over the years, the interior has changed somewhat – and the menu has changed a lot!

During my family’s most recent Disney World trip, we decided to eat lunch at the ABC Commissary for the first time in a couple of years or so. Today, I’ll go over what our experiences were, how we liked the food, and tips for eating there that you can use on your next Orlando vacation.

Where is the ABC Commissary? 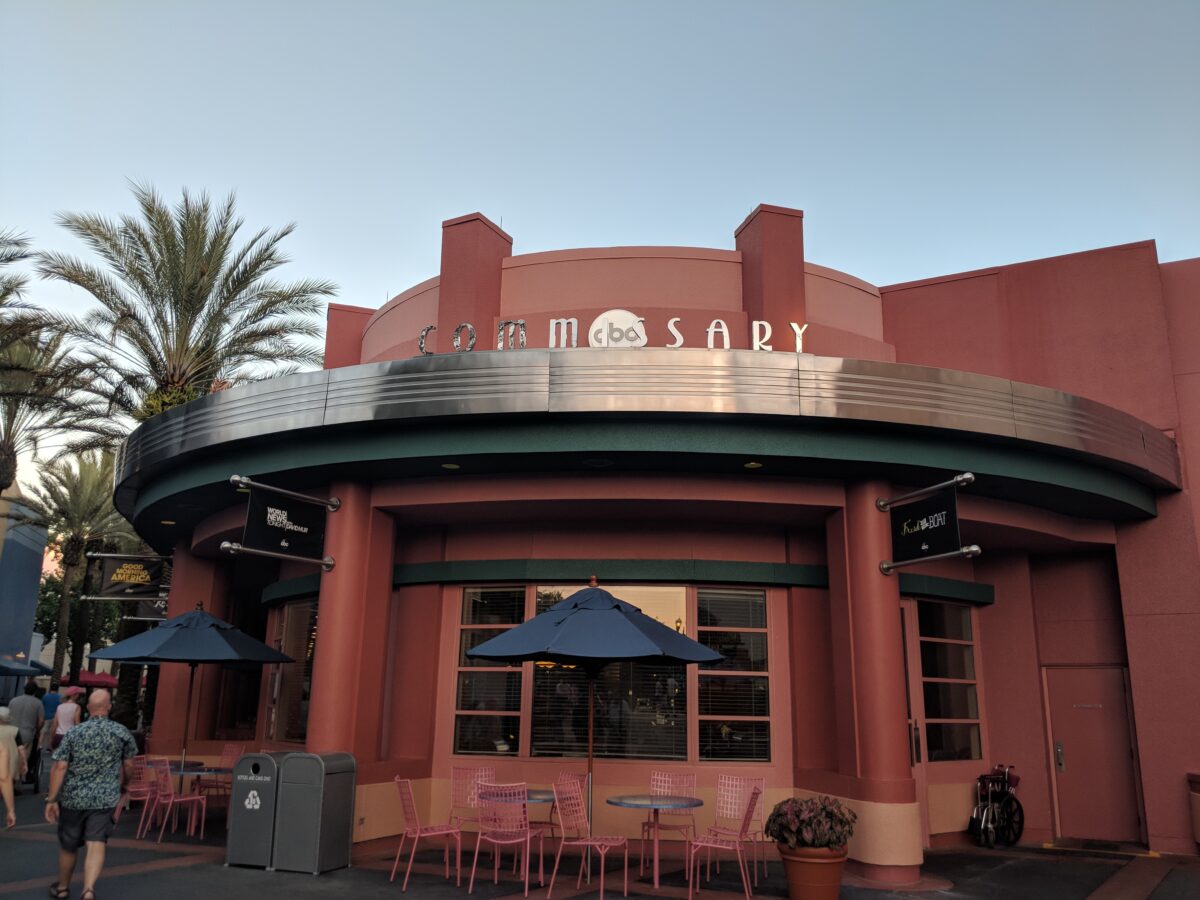 The ABC Commissary is a restaurant in Disney’s Hollywood Studios theme park. If you’re just entering the park, keep walking straight back to Grauman’s Chinese Theater (where the Mickey & Minnie’s Runaway Railway attraction is housed) and then turn left.

The restaurant is located in a small area of the park that’s known as (appropriately) Commissary Lane. The section is basically a walkway connecting other parts of the theme park. There are only two places to visit at Commissary Lane – the ABC Commissary and its next-door neighbor, the Sci-Fi Dine-In Theater Restaurant.

Our family actually used mobile order on the boat ride from the Walt Disney World Dolphin hotel to Hollywood Studios. I really liked how this was an efficient use of time!

When you place a mobile order, you pick a time period when you’ll be arriving at the restaurant. You can pick an arrival window that’s current (like if you’re already there or very close by), or you can pick a window of time that’s far in the future (like if you’re making plans for a meal later that day). Then, at some point during that time period, you can tell the app that you’re actually at the restaurant, and that’s when they start preparing your order.

We chose a time that was slightly in the future, just in case there was a long line at bag check or to enter the park. (Luckily, there wasn’t.) Once we entered the park, we headed to the restaurant. A few minutes later, our arrival window opened up, which meant we could tell the app that we were at the restaurant and they could start our order.

On the day we went, there was a Cast Member at the door who would only let people with mobile orders inside if their order was currently being prepared (i.e. during their arrival window). Once inside, we walked around quite a bit to find a table, along with other people looking for a place to sit. It was close to 1:00 PM and the place was pretty crowded. Fortunately, we found a table next to the window on the side of the restaurant that’s closest to Grauman’s Chinese Theater. This part of the restaurant seemed to be a little less crowded – be sure to check there if you’re having trouble finding an empty table.

There’s also some seating outdoors, if the weather isn’t too hot (or cold, or raining) during your visit.

Once we sat down at our table, we actually had a very short wait before our order was ready. And it was just a short walk to the pick up counter from our table.

So let’s discuss what we thought of the food!

A couple of us ordered the chicken club sandwich (with and without avocado ranch). 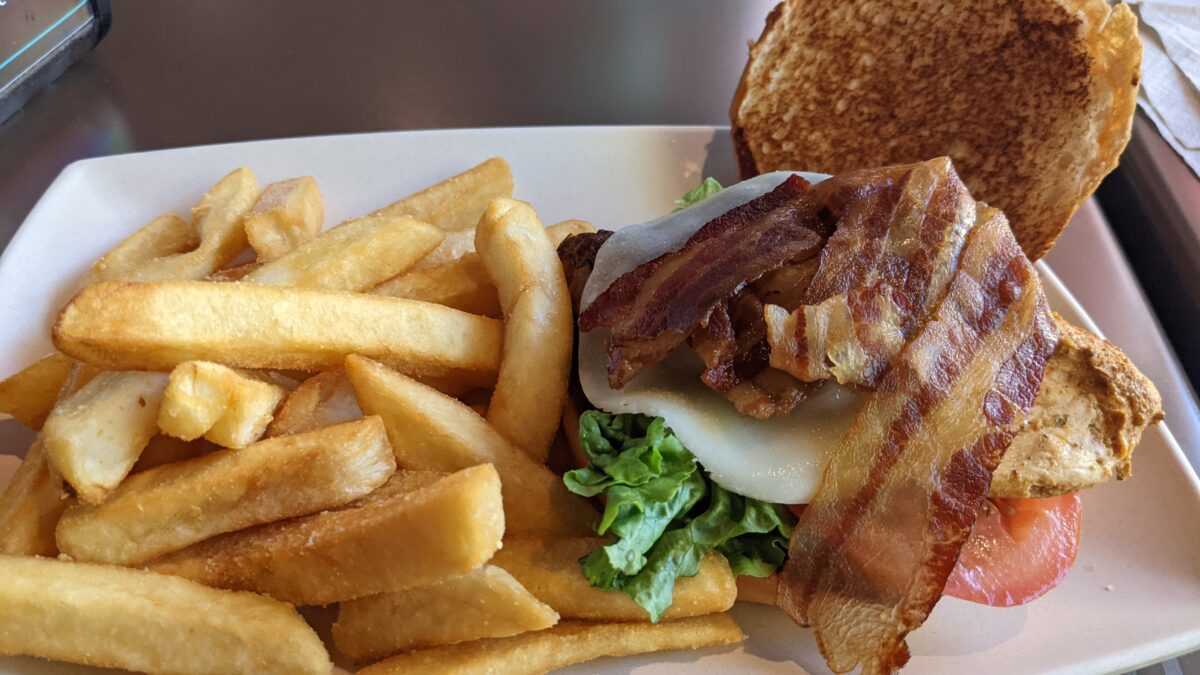 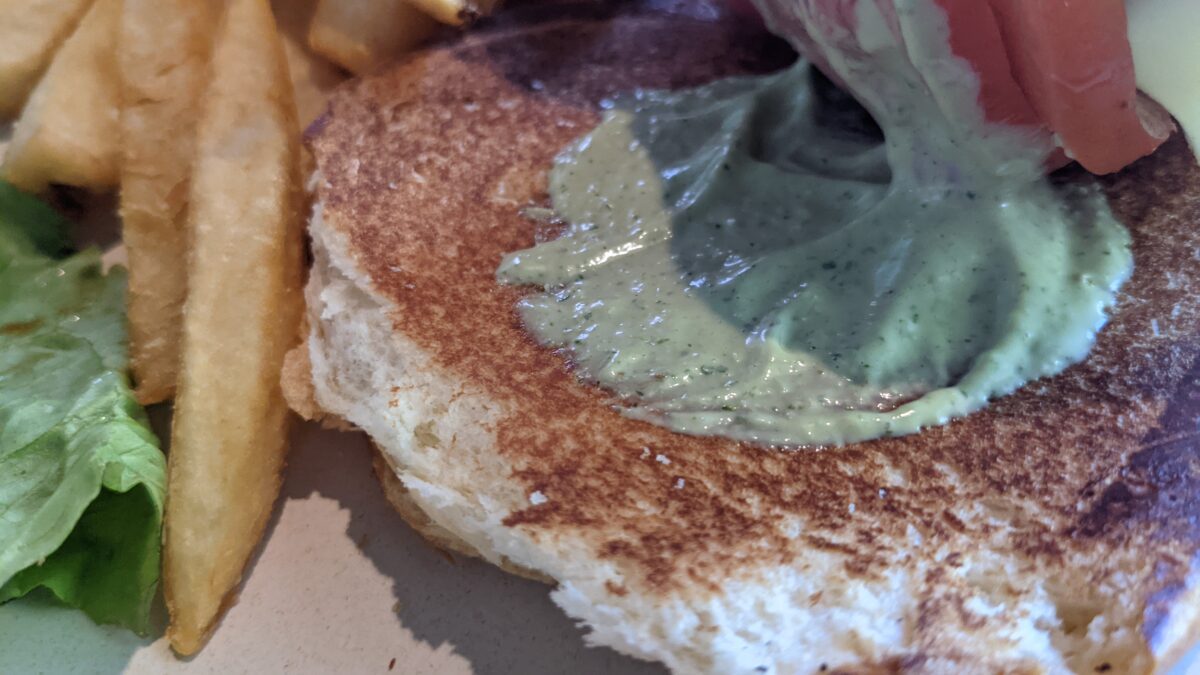 The chicken club sandwich consists of marinated chicken, lettuce, and tomato on a Brioche bun. There’s also bacon, provolone cheese, and avocado ranch, which are optional. Those items are included automatically when you mobile order, but you can choose to hold them.

You also get a choice of side: steak fries, arugula-farro salad, or apple slices.

My mom, who ordered the chicken club, thought the sandwich was good. She liked the bacon and the Brioche bun (which she found to be soft). Although she doesn’t particularly like ranch, she did think the avocado ranch was good. Unfortunately, parts of the sandwich were a little spicy (which she didn’t like), and she didn’t care for the marinade. She also found the marinade on the chicken to be inconsistent.

The French fries, though, were amazing!

My sister and I ordered the Buffalo chicken grilled cheese sandwich. This sandwich includes Buffalo chicken as well as cheddar, Monterey, provolone, and cream cheese, all on grilled sourdough bread. It also comes with the same choice of sides as the club sandwich, plus a side of Buffalo sauce. 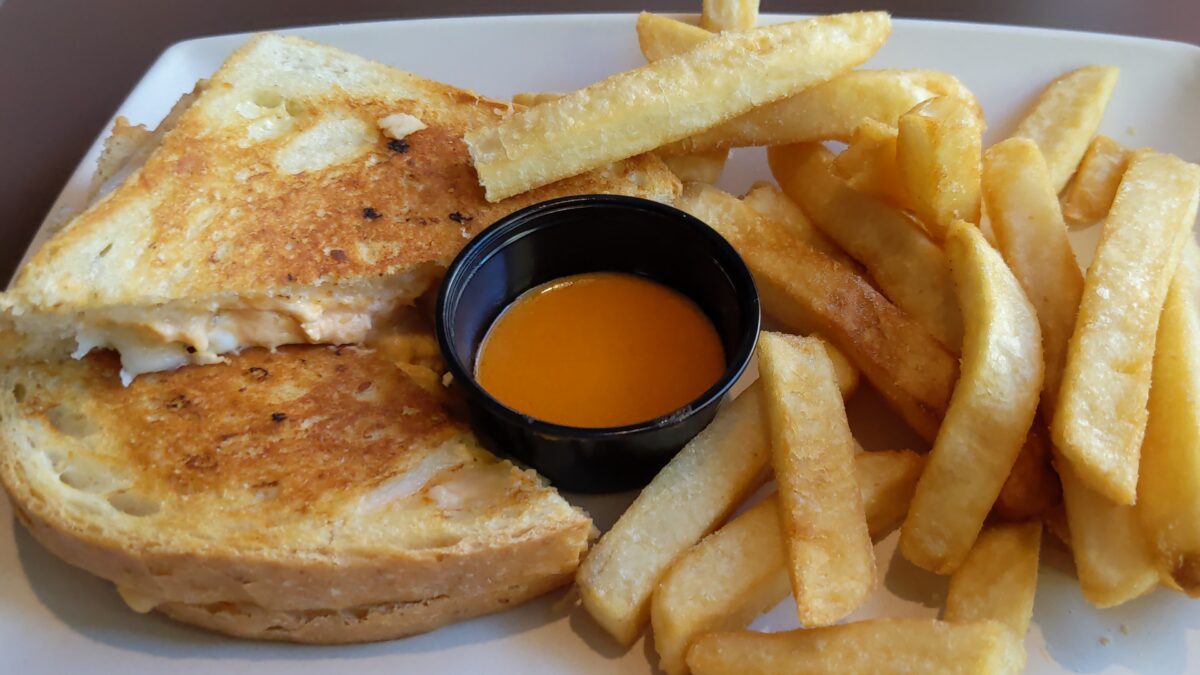 The combination of cheeses was fine. I liked it but didn’t love it.

The aftertaste and heat from the Buffalo chicken, though, was kind of unpleasant. Neither my sister nor I enjoyed it very much. However, we are not huge Buffalo chicken fans and don’t eat it that frequently. If you eat Buffalo chicken a lot or are a big fan of it in general, you might feel differently than we did.

We included a Santa’s Belt Cookie in our order for dessert. This is a holiday exclusive treat that is currently offered at ABC Commissary. 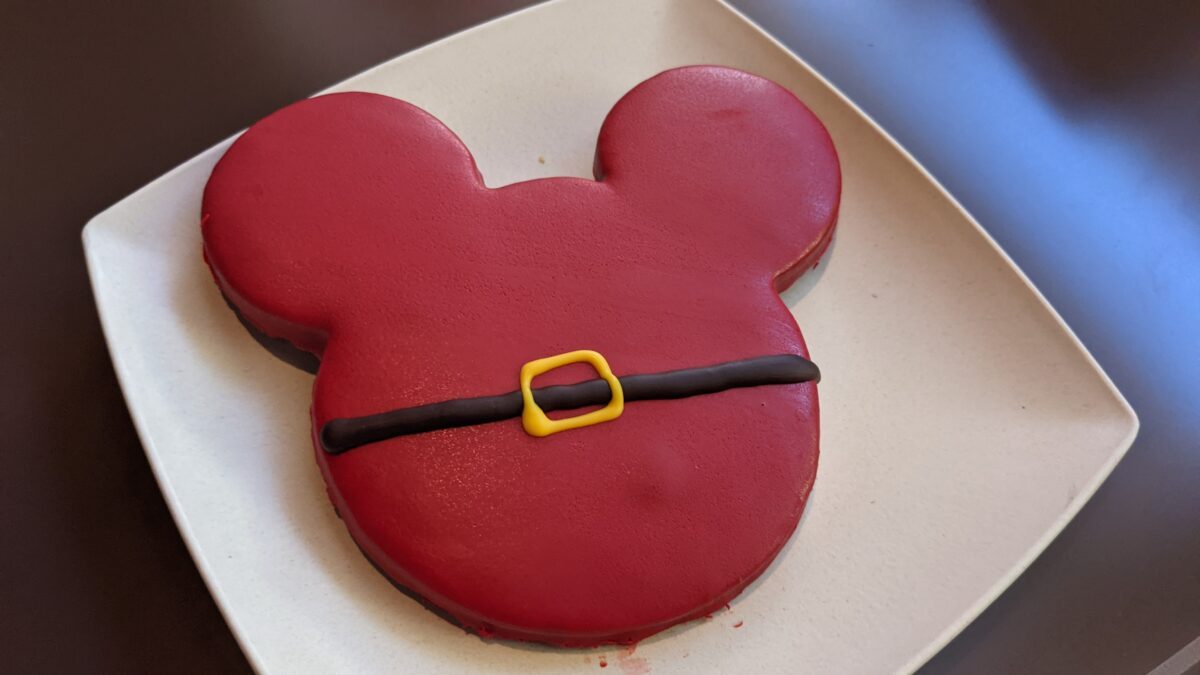 It is a chocolate cookie covered with white chocolate.

The cookie was large enough that a couple of us shared it, and we ended up not even finishing it all. You can get a better idea of the size by comparison here: 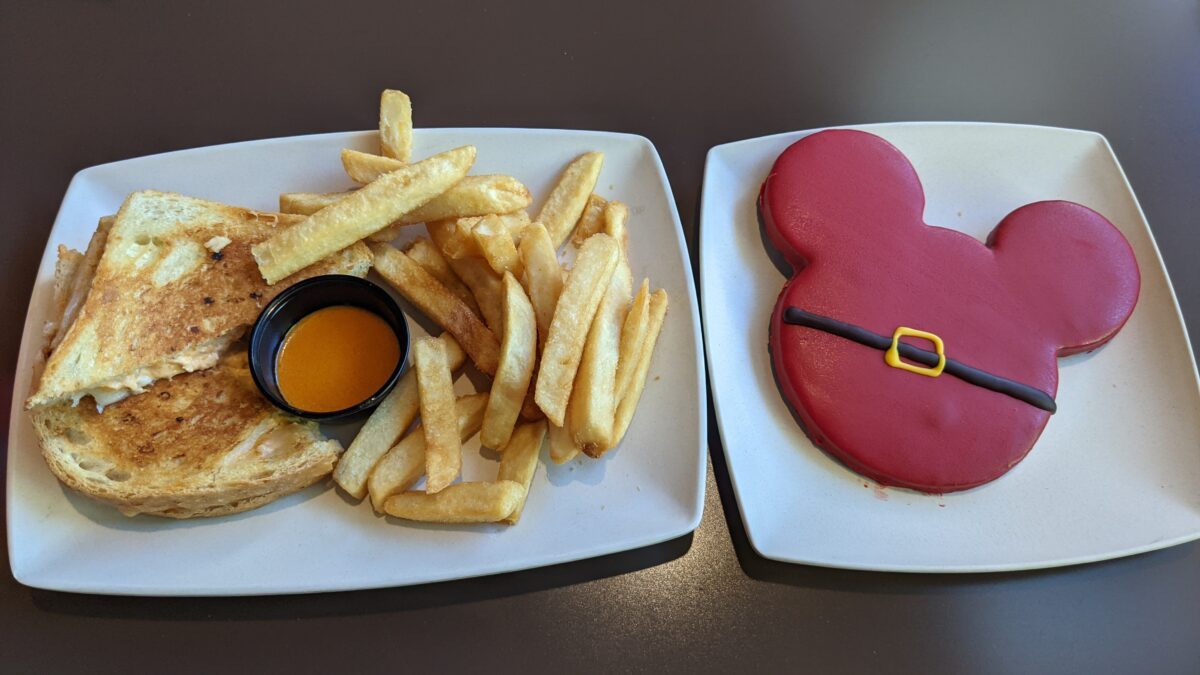 The not finishing it, though, was in part because it actually got kind of boring eating it. There’s not much of a variety of tastes. The cookie would have benefited from having some different icing, frosting or topping that broke up the monotony of the chocolate taste. (And I like chocolate, so that surprised me!)

Also, it’s fairly messy to eat, because the red coloring tends to get all over your fingers. We found that using a spoon actually helped with that.

So this isn’t really a review of the food so much as a tip. At most restaurants in the Disney World theme parks, you cannot refill your own soda. Your drink is filled behind the counter.

At ABC Commissary, there is a beverage station in the dining room area. You are able to refill your own drink. Keep this in mind in case you’d like to get an extra refill to take with you when you leave the restaurant.

While we had a good time at lunch at the ABC Commissary, as you can see, the food got some mixed reviews.

So if you’re planning on eating lunch or dinner there, you may or may not want to consider some of the other options.

Here’s how the menu currently looks.

What are some more places to eat in Hollywood Studios?

You can see some of these dining locations in our Hollywood Studios virtual tour: