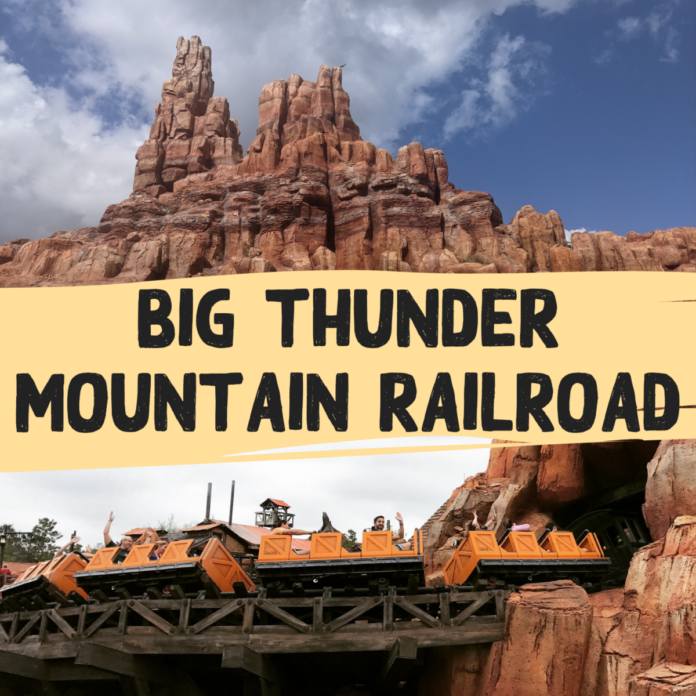 Today we’re going to go over this fun Disney attraction, including some of the sights you’ll see on the ride. And we’ll also share how to save money on Disney World tickets so you can ride the roller coaster yourself!

The Story Behind the Ride

This mine train roller coaster is set in the small mining town of Tumbleweed. With the discovery of gold on Big Thunder Mountain during America’s Gold Rush in the 1850s, Tumbleweed became a thriving town overnight. Unfortunately, what settlers didn’t know is that the Mountain was a sacred spot to Native Americans and was cursed.

This curse soon led to the occurrence of a horrible flash flood, and the town was abandoned. Tumbleweed became a ghost town, complete with trains (with no humans aboard) racing around the mountain. This, naturally, leads to the founding of the Big Thunder Mountain Railroad, so that those wandering through the old mining camp could take rides on the possessed trains.

While the backstory is detailed and compelling (as is often the case with Disney!), you don’t need it to enjoy the ride. In fact, it’s not even told in full on the ride itself – some of the background is from park literature and training materials.

The actual ride is a steel coaster that takes you through red rock formations based on those found in the American Southwest – specifically, the rising buttes in Arizona and Utah’s Monument Valley. You’ll also pass by a dinosaur skeleton in the side of the mountain, with a cracked eggshell nearby. There’s even a lake with water that shoots up when the train passes by (on warmer days only).

And since it’s a haunted railroad, you’ll also be dealing with falling boulders and exploding dynamite. Perhaps not surprisingly, parts of the ride contain small drops, are bumpy, and/or take place in the dark. Because of this, although it is a ride designed for both kids and adults, you might want to skip it (at any age) if you are prone to motion sickness or have a fear of the dark.

Please note that guests must be at least 40 inches (102 centimeters) tall to ride. The Ride that Never Was

When Walt Disney World originally opened in 1971, neither Pirates of the Caribbean nor Big Thunder Mountain Railroad were among the attractions in Magic Kingdom park. Big Thunder Mountain Railroad had not yet been created. And many of the Imagineers (Disney engineers) believed that there wouldn’t be an interest in a pirate themed ride in Florida, since local legends and stories about pirates were already familiar to many Florida residents.

Instead of creating a Disney World version of Pirates of the Caribbean, a western themed boat ride was planned. Cowboys, it was believed, would be more surprising and interesting to Floridians. This attraction, the Western River Expedition, would have been located in Frontierland. It would have been centered around (both inside and outside) what would have been known as Thunder Mesa Mountain.

However, after Disney World opened, a common complaint of guests was about the lack of a pirates ride. In response, Pirates of the Caribbean opened in Florida in 1973. This took away money that would have gone towards the Western River Expedition and was one of the contributing factors that led to the plans for Western River Expedition being cancelled.

In 1980, Big Thunder Mountain Railroad opened at Disney World, about a year after its Disneyland counterpart premiered. The Disney World version of the ride is located where the Western River Expedition would have been located. The Big Thunder Mountain Railroad ride also incorporated some of the concepts and theming that would have been part of the Western River Expedition.

If you’ve ever had a kidney stone, you may find this paper of interest, by a doctor who noticed that a number of his patients passed kidney stones after riding Big Thunder Mountain Railroad.

Want to take a ride on Big Thunder Mountain Railroad? Click here to find out how you can get a discount on your Disney World tickets and save money on your vacation!

And if you are looking for a place to stay while in Orlando, check out these 10 websites that help you save money on your Disney World hotel.

If you’re currently planning a Walt Disney World trip, make sure you check out this list of 10 things you should buy before your trip. Purchasing these items beforehand can save you a lot of money.

In honor of Disney World’s 50th Anniversary, they’ve made some exciting new changes to the parks. Click here to find out the 10 best new things to do at the theme parks.

And if you’re looking for a guidebook to help you plan your vacation, we recommend this book. It was helpful in writing this blog entry.

10 Reasons to Stay at All Star Music Resort at Disney...