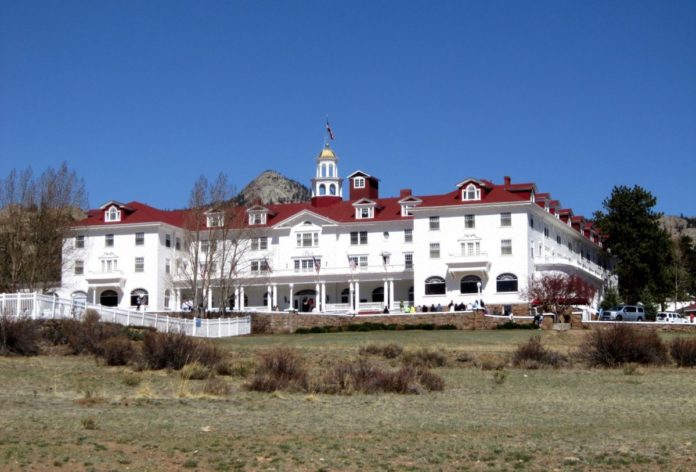 The Stanley Hotel was built in the early 1900s by the inventor of the Stanley Steam Engine, F. O. Stanley and his wife, Flora.  The Georgian Revival-style hotel opened in 1909 and was patronized by the rich and famous. John Philip Sousa, Theodore Roosevelt, Molly Brown, the Emperor and Empress of Japan and many Hollywood celebrities have stayed there.

Flora Stanley died in 1939 and F.O. passed away in 1940.  Ever since then, guests and hotel staff have seen F.O. in the lobby, billiards room, and bar.  When someone approaches him, he simply disappears. Fiona continues to entertain guests by playing the piano in the ballroom.  On numerous occasions, people have heard music when the ballroom was empty. They can see the piano keys moving, but when they get close to the piano, the music stops and the keys no longer move.

The hotel’s head chambermaid, Elizabeth Wilson, was nearly killed in an explosion at the hotel.  She recovered and returned to work at the hotel until her death in 1951 when she died. But she didn’t leave The Stanley.  Room 217 is a favorite of hers. She’s been known to unpack bags, move objects and turn lights on and off.

Steven King and his wife stayed at The Stanley Hotel in 1974.  During a nightmare filled night in Room 217, King came up with the outline for his bestselling novel, “The Shining.”

The fourth floor at The Stanley Hotel is where female employees, nannies, and children stayed in the hotel’s first few decades.  Guests report hearing children running around, laughing, giggling and playing. In Room 401, there’s a door that opens and shuts on its own.  In Room 428, guests have reported hearing footsteps above them and furniture being moved. Hotel staff say that’s physically impossible given the slope of the roof.  There’s also a friendly cowboy who appears at a corner of the bed during the night.

The grand staircase has had pictures taken showing apparitions on the stairs.  A television screen outside of the hotel’s tour office features plenty of ghosts caught on camera by tour guests.

There are underground caves beneath the hotels which seem to be a popular place for spirits.  Under the hotel is a higher than average concentration of limestone and quartz. Some ghost hunters feel these materials can amplify paranormal energy and activity.

While some spots have more paranormal activity than others, guests have reported strange occurrences – shadowy figures, eerie laughter, flickering lights and items moving by themselves – in every room in the hotel compound.  In recent years, it’s been investigated by SyFy’s Ghost hunters, Travel Channel’s Ghost Adventures and Most Haunted USA.

Overnight visitors choosing the “Ghost Adventure Package” are assigned a room on the spooky fourth floor, given a pocket-sized electronic magnet field reader and other ghostly equipment.

Author and part-time paranormal investigator, Richard Estep says “I tell my tour group I’ve investigated castles, dungeons and buildings older than the U.S. and The Stanley is on the top of that list.”  Estep leads ghost tours on the weekends.

Listed on the National Register of Historic Places, the Stanley Hotel is open year-round.  It is known for its old-world charm and its 420 rooms have been restored to its original grandeur.  This magnificent historical structure offers a menu of amenities, culinary experiences, and lavish spa treatments.

Click here to find the best deals for the Stanley Hotel.

If you’d like to read more about the haunted history of The Stanley Hotel, try these books.  And click on our links to get the lowest prices for them.

Win a Trip to BookCon in NYC

Win a Trip to the Super Bowl