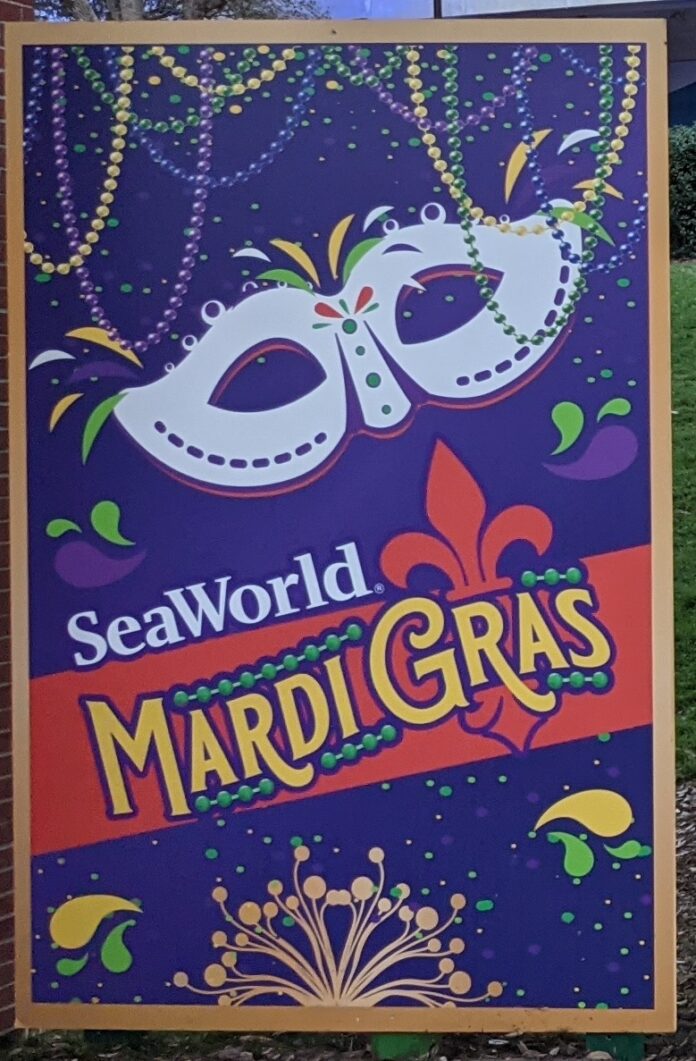 We’re almost at the end of January so you know what that means, right?  Laissez le bon temps rouler!  Yes, it’s that time of the year when we all get giddy with anticipation for Mardi Gras.

But SeaWorld San Antonio is starting the party early!  In fact, it started the party on Saturday, January 14, 2023.  Because that was the first day of its annual Mardi Gras celebration!

This is a limited-time theme park event that will be running on the weekends until Sunday, February 26, 2023.  But I have to say, I think this year will be the best one yet!  I think you’ll agree once you see some of the festivities they have lined up this year.  And after I tell you about those, I’ll tell you how you can save money on your ticket to SeaWorld San Antonio!

So one truly special feature of this special event is the Sesame Street Mardi Gras Parade!  You may have seen your favorite Sesame Street characters in a parade before at SeaWorld San Antonio.  But have you ever seen them at a Mardi Gras-themed parade?

The floats in the parade will be decorated for Mardi Gras.  You’ll see lots of purple, gold, green, and lots and lots of sparkles.  The characters will be dressed for the event, too.  There’s also great music and dancing.  It’s a really fun way to see a Mardi Gras parade that is completely family-friendly.

The Sesame Street parade isn’t the only live entertainment at SeaWorld during their Mardi Gras celebration.

And they have some great entertainment lined up!

This is a great musical act coming to SeaWorld.  Raa-Raa is from Lafayette Parish in Louisiana and was raised in a french speaking creole family.  His music reflects authentic Lala and Zydeco music.  Zydec#o is a French Creole musical genre from southwest Louisiana.  Similar styles of music to Raa-Raa are Buckwheat Zydeco, Clifton Chenier, and Rocking Dopsie.

The rolling globe is a circus skill that has been popular for over a hundred years.  You can see live rolling globe ball walkers roaming through the park and interacting with guests like you.  They’ll even be juggling simultaneously!

See how many beads you can collect from this colorful krewe of jesters.

Another fun thing about this festival is that like other festivals at SeaWorld, like their Bier Fest, there are special festival-themed menu items throughout the park.  In this case, there are New Orleans and Mardi Gras-inspired food and drinks.  You can find them at different stations.

And the menu looks really delicious, too.

All of these sandwiches, too, are served with Zapps chips, which are New Orleans Kettle‐Style Potato Chips!

The King’s Concoctions and The Queen’s Concotions

An exciting thing about SeaWorld San Antonio’s Mardi Gras event is that it is included in the cost of a general admission ticket.  So if you have an annual pass or season pass, you can use it to attend this festival.

If you don’t already have one of these passes and want to buy one, or you want to buy a single or multi-day ticket, then click here.  You can currently save a lot of money by purchasing your ticket this way.