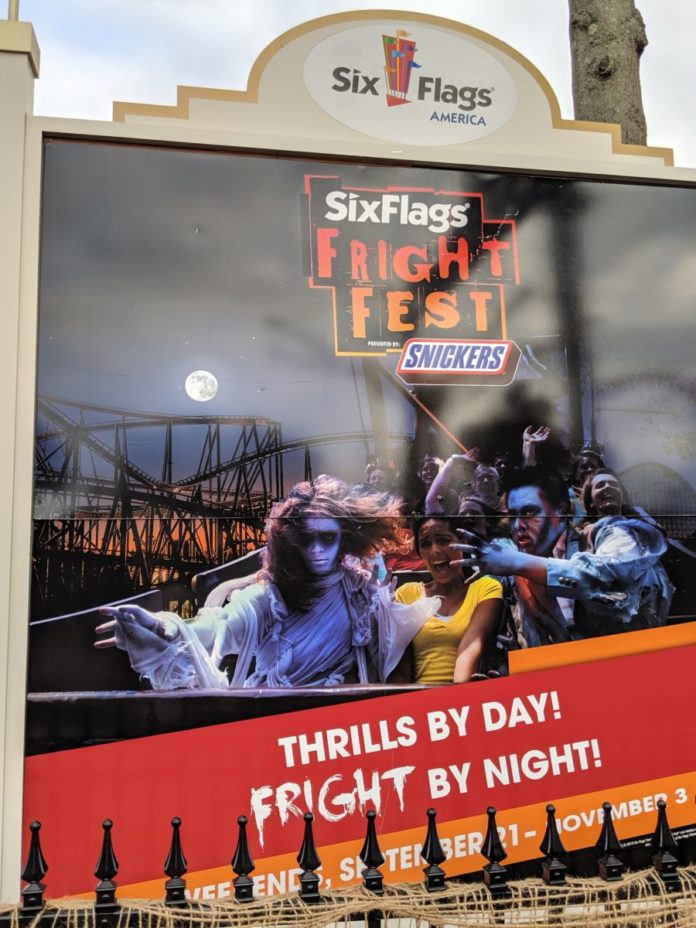 Looking for a scary Halloween event in the Washington D.C. area of Northern Virginia & Maryland?  Then you’ve got to check out Fright Fest at Six Flags America theme park in Bowie, Maryland!  This Halloween themed event is a lot of fun…if you’re brave enough!

We’ll go over the different haunted houses and scare zones that are included in this event.

The Haunting of Hall Manor

Did you know that Six Flags America has its very own ghost?  In the late 1800s, a girl named Eleanor tragically died while playing at Hall Manor.  She was buried next to her home – and now that grave resides on the land in Six Flags America theme park.  Eleanor is now a ghost and she is not the sweet girl she once was.  So be on the lookout for Eleanor as you walk along the terrorizing, wooded trail around Hall Manor.

In Aftermath, you have entered a post-apocalyptic world.  It’s a wasteland that has been taken over by zombies.  You are the last survivor.  But can you escape the horror in the Aftermath?

It’s an innocent Mardi Gras party at the Voodoo Queen’s home…innocent, that is, until something went terribly wrong.  Now she wants to seek revenge on anyone who enters her home.  Can you make it through her catacombs and the massacre ball alive?

Fairy tales are often sweet and innocent.  But not in this haunted attraction!  Once you put on your 3D glasses, you’ll see you an incredibly twisted version of your favorite fairy tales.  This Little Red Riding Hood won’t be scared of the big bad wolf.  And you can witness Alice in Wonderland feasting on the White Rabbit.

Have you ever noticed that when mischievous teenagers come upon a forsaken crypt, things don’t exactly go well?  Well, here is no different!  Scary creatures have been released from the crypt.  You’ll have to claw your way through the lairs – unless you want to be caught in the crypt forever?

The name alone of this haunted attraction tells you this isn’t for the faint of heart!  In Total Damnation, you’ll go through ten freaky and twisted chambers, each one worse than the last.

Coyote Creek is an abandoned ghost town that is being protected by those who have lived there before.  So watch out for the ghosts, zombies and ghouls when you walk through this scare zone.

Zombies and other evil creatures are walking around Zombieville, looking for their next meal.  Make sure it’s not you!

In this scare zone, you’ll be taken back to a time where technology was primitive…and pre-historic creatures roamed the land.  They want to steal the souls of anyone who trespass into their land.  So obviously you’re going to try to make sure that doesn’t happen!  At least not to you, anyway!

Killer clowns will be running around throughout this section and will be hiding in the shadows.  If you’re scared of clowns, then this will be the scariest scare zone for you!

Fright Fest also has great Halloween-themed shows at Fright Fest.  Some of these include the following:

Watch two vampire slayers encounter more monster, blood and terror than even they bargained for in CURS3D!  This musical show takes place at the Grand Theatre of Main Street 1776.

Dr. Frankenstein’s wife has been killed.  Now, he will do whatever it takes to resurrect her.  This show takes place at the Stunt Arena in Chesapeake.

Flesh is a burlesque-style show.  It mixes dark and sensual music with dance moves.  Please note that this show is only intended for an adult audience.  This takes place at the Crazy Horse Saloon.

Not sure you want to visit Six Flags America without getting to do one of your favorite rides?  Well, don’t worry; there will still be 10 rides available during Fright Fest.  And it’s really fun to ride your favorite thrill rides in the dark!

You’ll even get fun versions of some of your favorite rides.  Like you’ll get to ride WONDER WOMAN Lasso of Truth – but backwards!  And the Teacups ride will have a Terror Twist!

To save money on tickets, click here.  You’ll be able to save $31.99 on your ticket by getting your ticket through this website!