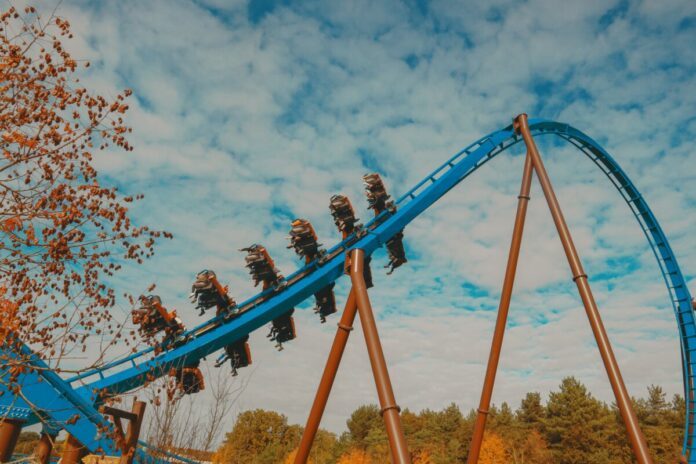 Toverland is a family friendly theme park in Sevenum in the southeastern Netherlands. And it really is fun for the whole family. Attractions range from children’s rides to five thrilling roller coasters – and there’s even a chance to do magic yourself!

What started as an indoor family entertainment center in 2001 really has become an impressive park with a magical theme. The expansion in 2018 alone caused the park to grow one and a half times bigger.

Today, we’re going to go over the fun rides you’ll find in the 6 different themed areas at Toverland. And then we’ll let you know how you can save money with discount tickets to Toverland!

Port Laguna is the entrance area of the theme park. As the designer explained in this interview, he drew inspiration from Port Entry at Universal’s Islands of Adventure, as well as the entrance to Disney’s Animal Kingdom (both parks are in Florida).

While there are no rides located in this area, that doesn’t mean there aren’t fun things to do!

Have you ever dreamed of a magic wand that allowed you to do your own magic? Well, now’s your chance!

For a deposit, you’ll get a magic wand that you’ll be able to “test” out. (The idea is that all sorts of magical things have been washed ashore at Port Laguna for years, and this includes magic wands.) Using a magical map, you’ll be able to find the special magical locations. And then you can be amazed by surprising effects with just a sweep or tap of your wand!

And if you want to take a wand home with you, don’t worry. When you’re done, you have the option of taking home a new wand, storage box and your own magical map.

If you love magic, you won’t want to miss this interactive show. The Magistralis family has a magic store, with a magical warehouse called Magiezijn. And it’s the perfect spot for young wizards to get involved with magic!

This area is themed to Celtic mythology. And it’s a must for fans of the legend of King Arthur (or anyone who enjoys fun rides!).

This children’s play area is a great place for young guests to prepare for taking the throne one day – through playing and climbing, of course!

The phoenix is a mythical, immortal bird, frequently associated with Greek mythology but with variations in many cultures. The idea is that the bird can rise again from its own ashes. The story behind the Fēnix roller coaster is that the bird has just risen and is about to take its first flight. And what a flight it is! Guests can enjoy a 40 metre drop, speeds up to 95 km/h, and three inversions.

This is a family boat ride across the waters of Avalon. And you might even catch a glimpse of Fēnix flying past you!

The original outdoor section of Toverland, this area has an Ancient Greece theme. It was originally known as “Troy Area,” and the backstory involves the Greek heroes from the battle of Troy settling down in this section of the theme park.

On this kid friendly attraction, you’ll head to Troy by riding a galloping (imitation) horse.

Soar through the sky with the Greek heroes on this enchanted swing boat! You’ll reach a top angle of 75 degrees.

Thrill seekers won’t want to miss the highest, fastest, and longest wooden roller coaster of the Benelux (Belgium, the Netherlands, and Luxembourg). Speeds include a maximum of 90 km/h, with a height of up to 35 metres.

You’ll find plenty to do at Land van Toos, the original indoor part of Toverland.

Take a ride through the air on this beautiful swing ride! As with traditional swing rides, you’ll be traveling in a circle.

Young children can enjoy this toddler friendly roller coaster (more like a train), themed to a cute green caterpillar. And older family members can join them, too!

Spin around in brightly coloured cups on this teacup ride.

This roller coaster, while themed to a crazy, nearly runaway train, is very family friendly. In fact, children as small as 90 cm in height can ride (though kids between 90 and 120 cm will need to be supervised by an adult).

The appeal of driving is perhaps greatest for those who aren’t yet old enough to drive. But on this ride, young children are able to get behind the wheel of (small) jeeps, busses and fire engines.

If you still have your magic wand you got in Port Laguna, you can put it to good use here! There are more chances to do spells at the bewitched house.

Guests will experience unexpected (and amusing!) bounces on the way down when riding this mini drop tower attraction.

This happy and creative fantasy land is home to “Dwervels” (as well as some fun attractions!).

In 2004, the world’s first motorbike roller coaster, Booster Bike, opened in Toverland. Since then, theme parks around the world have added motorbike coasters as well, such as Hagrid’s Magical Creatures Motorbike Adventure at Universal’s Islands of Adventure and Tron Lightcycle Power Run at Shanghai Disneyland.

Coco Bolo is an unusual bird with a nest high on a tree top. On this tower ride, guests seated in pairs will ascend towards the top of the tree. Just make sure Coco doesn’t see you – she might get angry if she thinks you’re coming to take her place at the top!

Explore the magical valley while taking a wild water ride. And watch out for the Dwervels – they like to splash the guests!

Reach speeds of up to 70 km/h on this spinning roller coaster.

When Molly the Dwervel blows her shell horn, she wakes up some beautiful mythical water horses. And these horses are happy to take guests for a relaxing ride on this charming water carousel attraction.

At the edge of Katara (the Fountain of Magic) lies Waku Waku, a fun water playground.

In this exciting part of the park, you’ll notice a cheerful Austrian theme.

On this Alpine themed ride, your ride vehicle will slide back and forth on a U-shaped track while spinning around at the same time.

This log flume ride will send you over a waterfall that’s 15 metres high!

A ride on this beautiful carousel may bring back some favorite childhood memories – or you can make new memories! Ride a magnificent horse or take a seat in a carriage.

Children can have fun on the slides and rope bridges that are part of these three towers.

Are you up for the challenge? This daring obstacle course includes climbing over nets and a bridge made of small slats.

As the backstory to this ride goes, the brilliant Austrian inventor Maximus Müller created a technologically advanced bobsleigh run – Blitz Bahn. And you can be the test driver who sets a new speed record!

While it might look like a nice and simple house from the outside, inside it’s a fun house with plenty of surprises.

On this vertical carousel, you’ll sit in a spinning basket and reach a height of 13 metres. It’s a fun way to get great views of Wunderwald!

With so many fun attractions for kids, teens, and adults, I’m sure you’d love to visit Toverland. Well, click here to save money with discount tickets! You can save 6% on theme park admission.

5 Ways To Save At Michigan’s Adventure

Save 40% off Everland Tickets

Win A Trip To Universal Orlando Resort in Florida