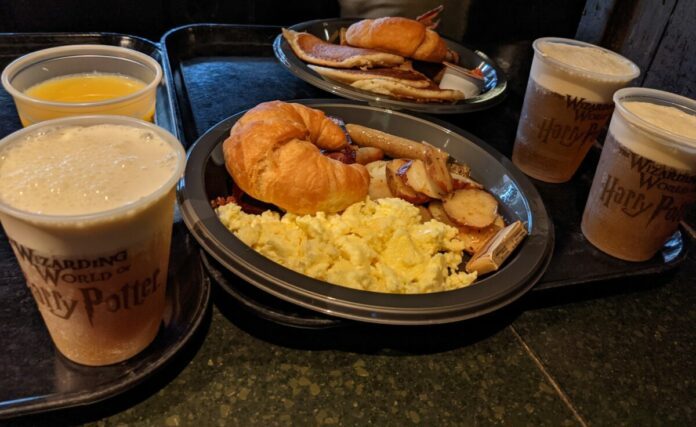 As you can imagine, the restaurants at the Wizarding World of Harry Potter are quite popular.  Because everything Harry Potter at Universal Orlando is very popular.

So if you want to make sure you get to eat breakfast here, you can book your breakfast ahead of time.  If you are staying onsite at a Universal Orlando hotel, you can go to the Universal Vacation Planning Center.  You can usually find that in the lobby.

We were staying at the Royal Pacific Resort when we went to Three Broomsticks.  So early in the morning (around 8:00 AM) we went over to the desk, where there was no line.  I am glad I went as early as I did because I noticed about an hour later the line was significantly longer.

But anyway, I asked about eating at the Three Broomsticks for breakfast.  They gave me a choice in time and I chose the 10:15 AM slot.  They said I could show up earlier than that but don’t show up any later than that.  I chose the later time because I was checking out that morning and I wanted to give myself time to do that and then get over to Three Broomsticks.

We then paid for our breakfast ahead of time.  This actually saves you time once you are there.  They printed off tickets for us which we could use as meal vouchers when we got to Three Broomsticks. 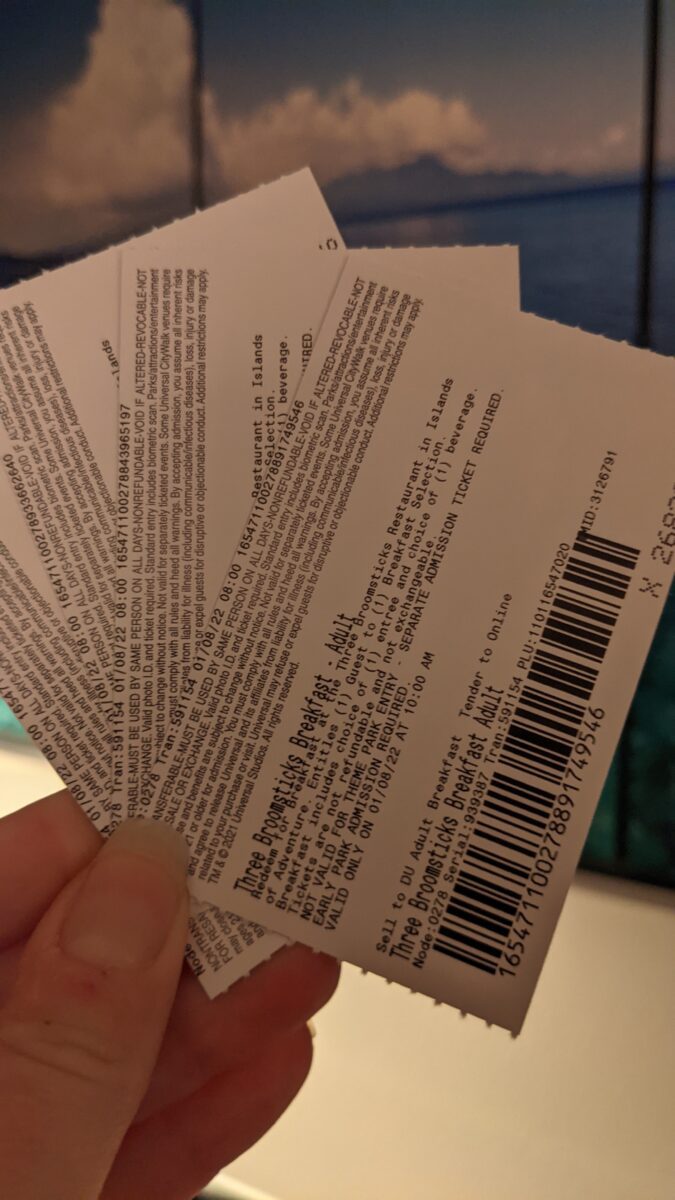 The breakfast voucher includes one beverage and one breakfast entree, so you don’t have to pick out your food ahead of time.

Three Broomsticks is located in Hogsmeade, the Wizard World of Harry Potter section of Islands of Adventures.

Since my family was staying at Royal Pacific, we were able to take a short walk over to Islands of Adventures.  After getting into the park, we walked to the right.  We went through both Seuss Landing and the Lost Continent to get to Three Broomsticks.

How it works is that when you walk up the restaurant, there is a line you get in outside of the door.  Eventually, you can order your food.

The line was much longer than when I had breakfast at the Leaky Cauldron.  I don’t know if it was because Three Broomsticks is more popular than Leaky Cauldron.  Or it could have been because I was in there on a Saturday versus Sunday.  Or if it was because I was there later in the morning, closer to 10:30 AM.  Whatever the reason, if you are visiting and don’t want to wait in a long line, you might consider coming here earlier and possibly on a weekday.

But having said this, the line wasn’t too bad.  The weather was pretty nice when we were outside.  And they had great theming in the line once you got inside, with pictures and props. 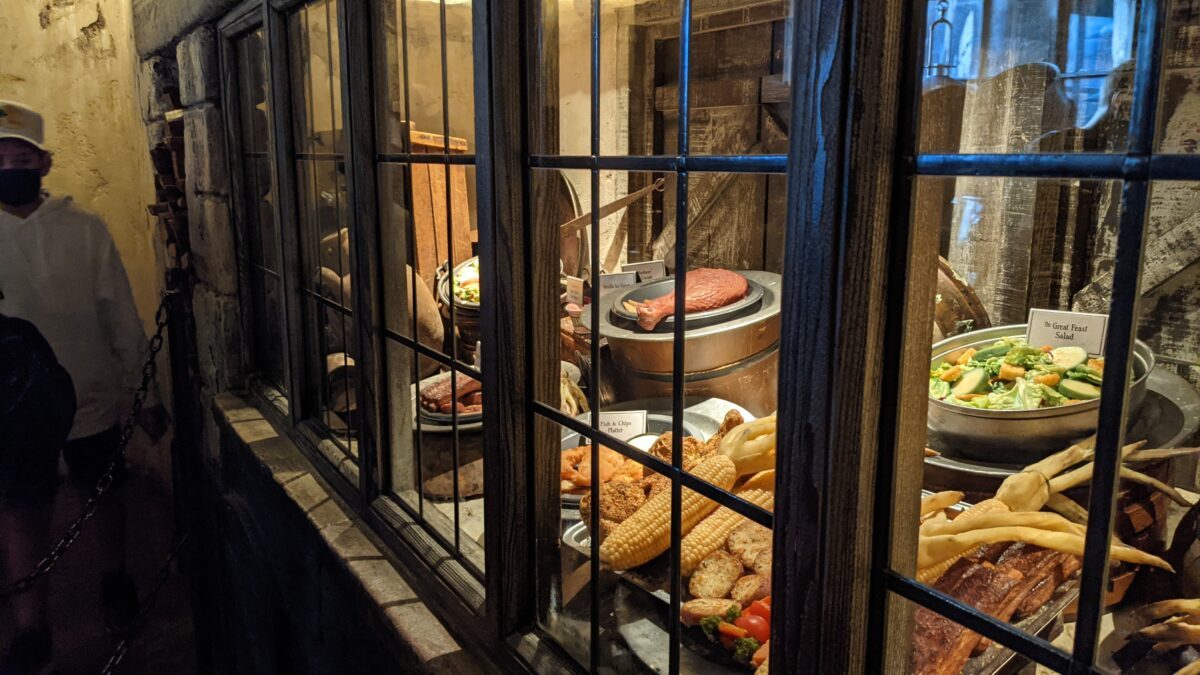 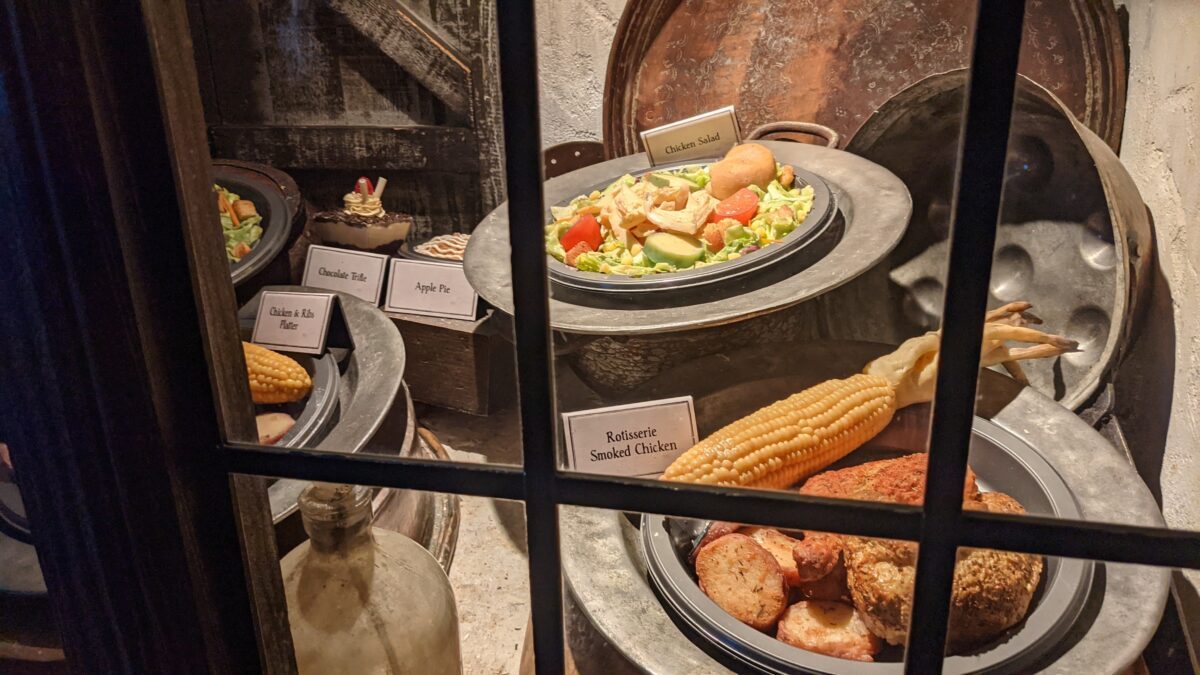 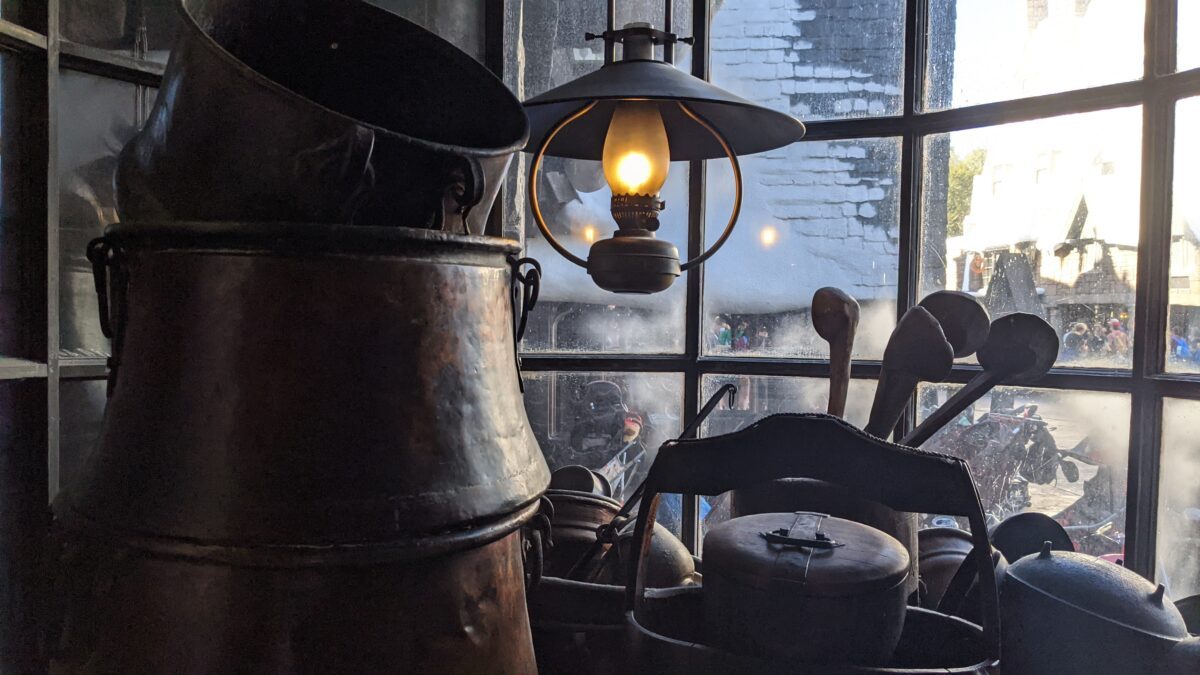 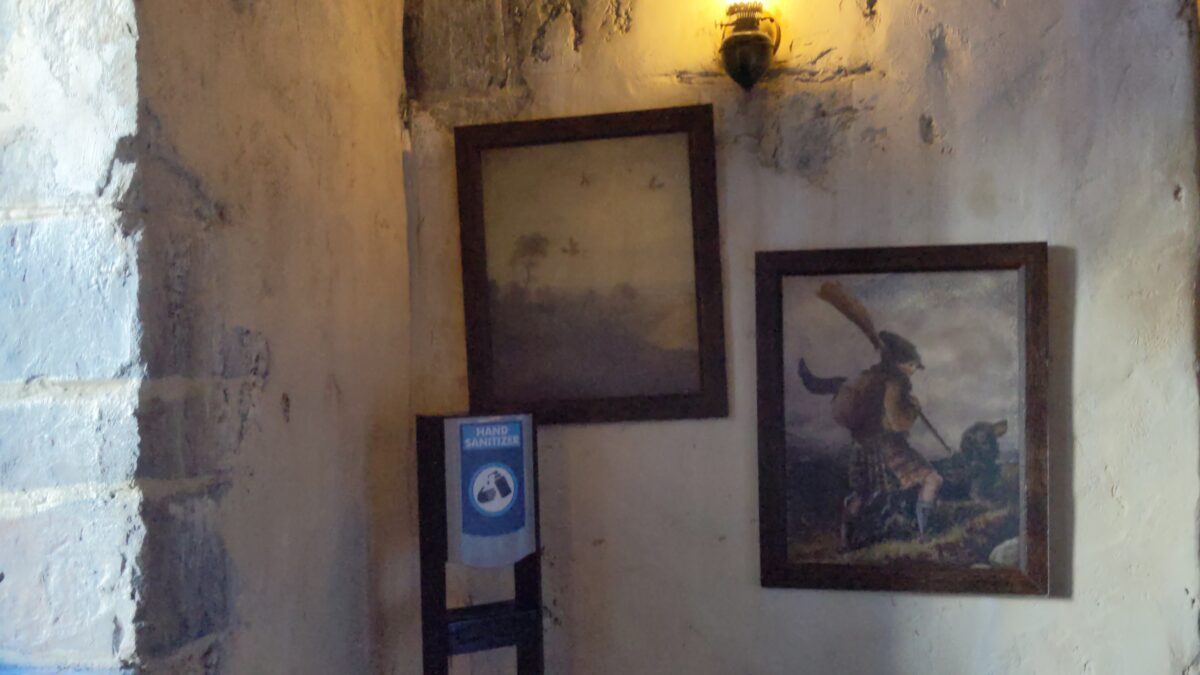 Finally, we were able to order our breakfast.  After you order, you stand there and wait for your food.  Then once it’s ready, you’re able to take your food and pick your table, which I liked (that was different than what happened at Leaky Cauldron’s breakfast, where they assign you a table).  Some of the chairs are bench seats and some have backs, so I wanted to pick a chair with a back for more back support.  Also, if you are concerned about social distancing, you can pick a table farther away from people or choose a table outside (more about that later).

Three Broomsticks is themed to the Three Broomsticks Inn which appeared in both the Harry Potter books and movies.  By the way, after visiting here, I suggest watching some of the movies it appears in, like Harry Potter and the Half-Blood Prince.  I watched that soon after visiting.  And I was really impressed with just how similar the restaurant is to the inn and pub that appears in the movie.  For example, the chairs at the table are of different designs and lengths.  And that is right from the movies. 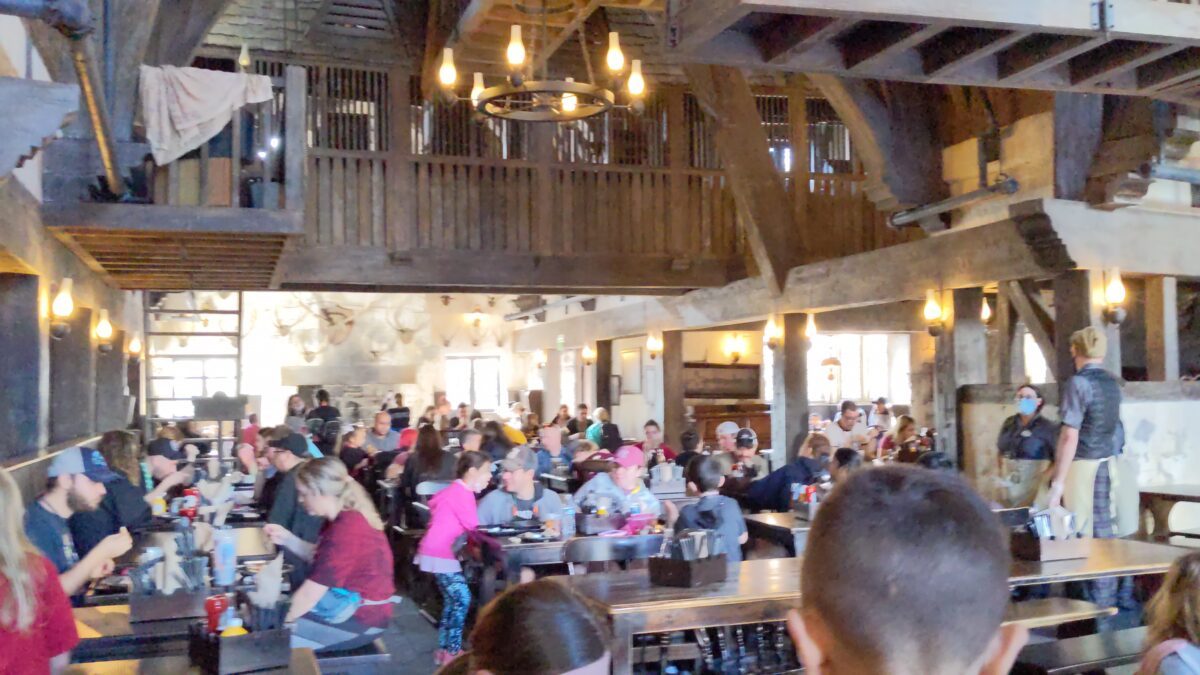 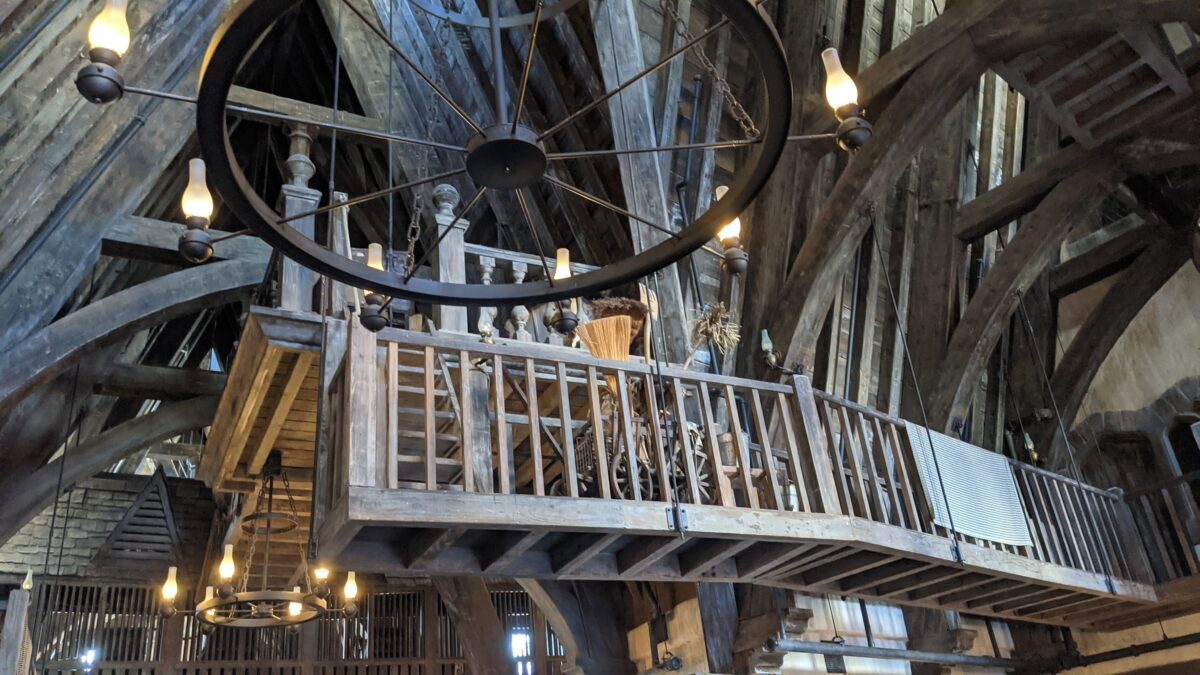 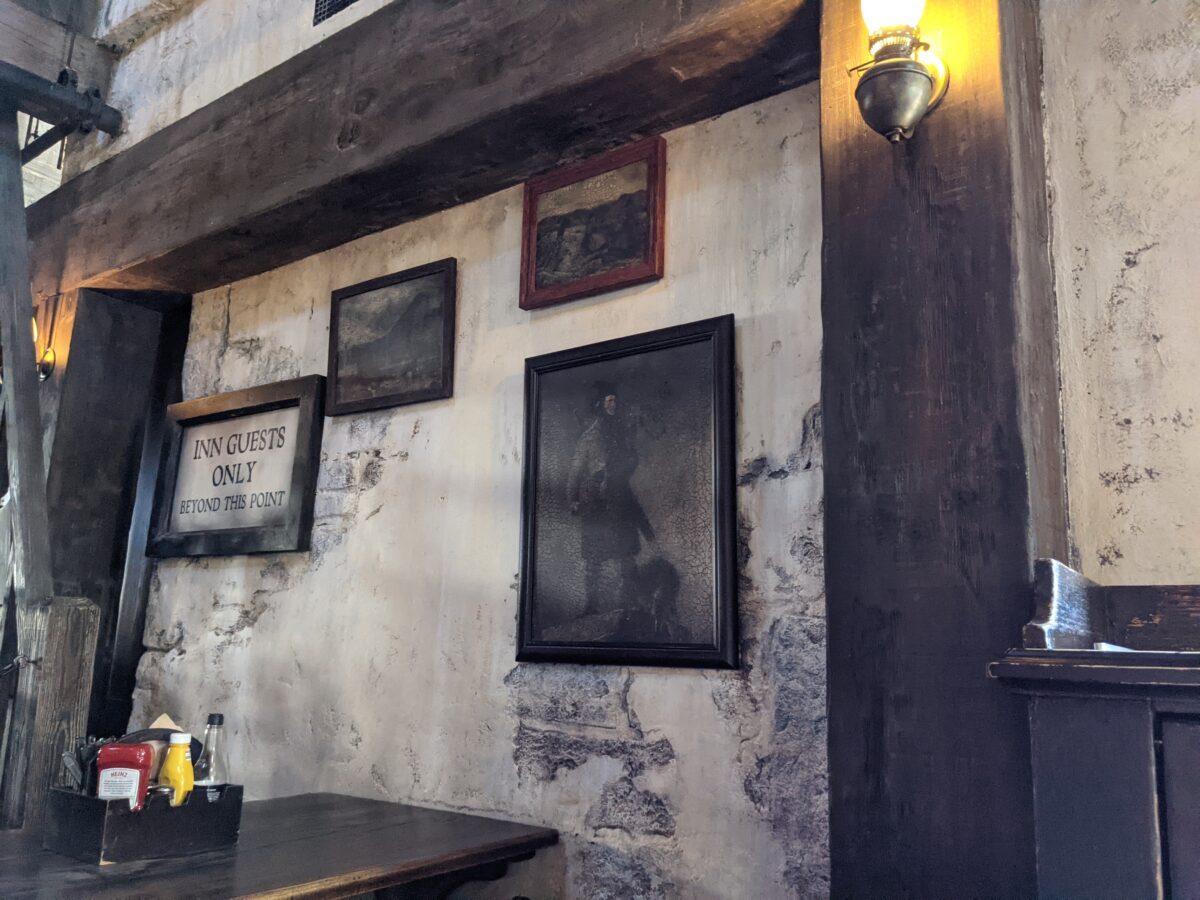 But as I said before, you can also sit outside. 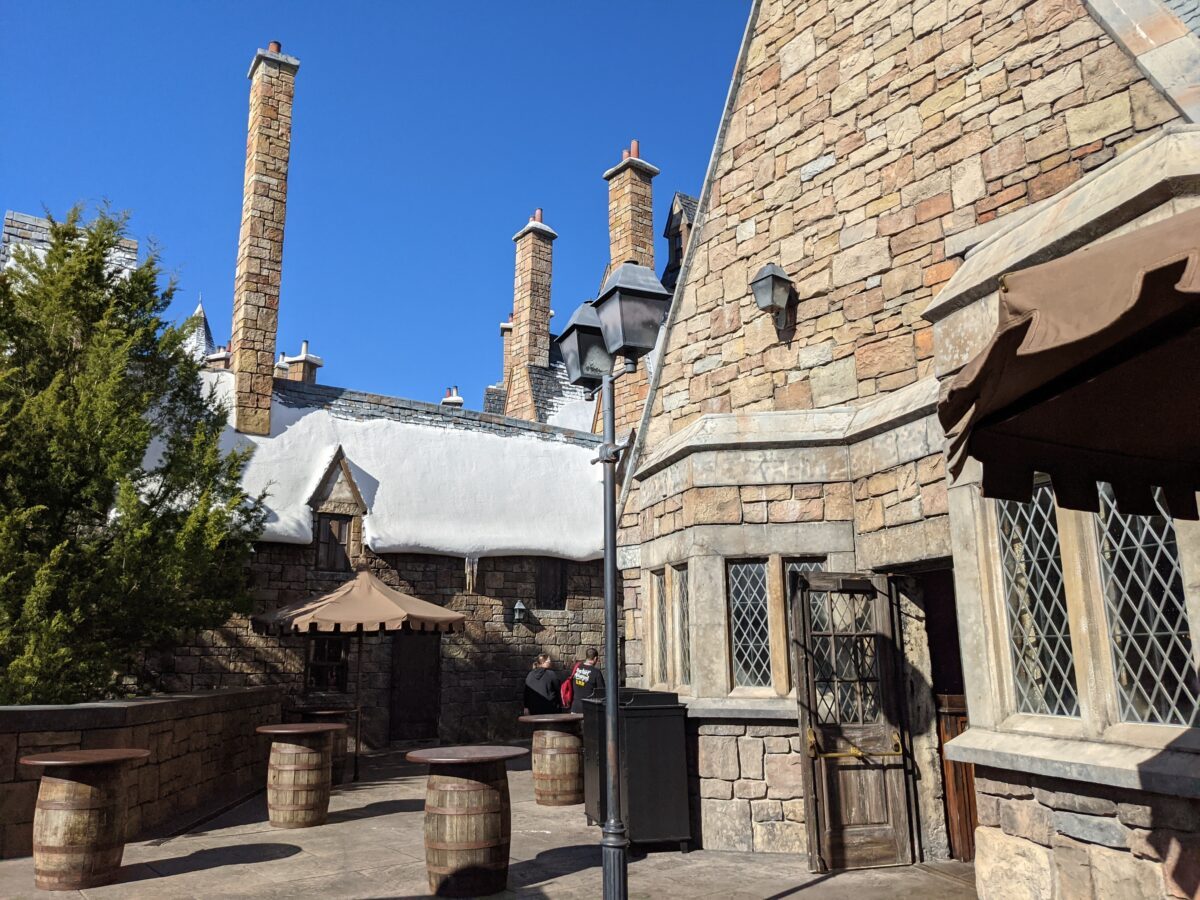 And you have great views if you sit outside.  Some tables even give you a view of Hogwarts, which is awesome. 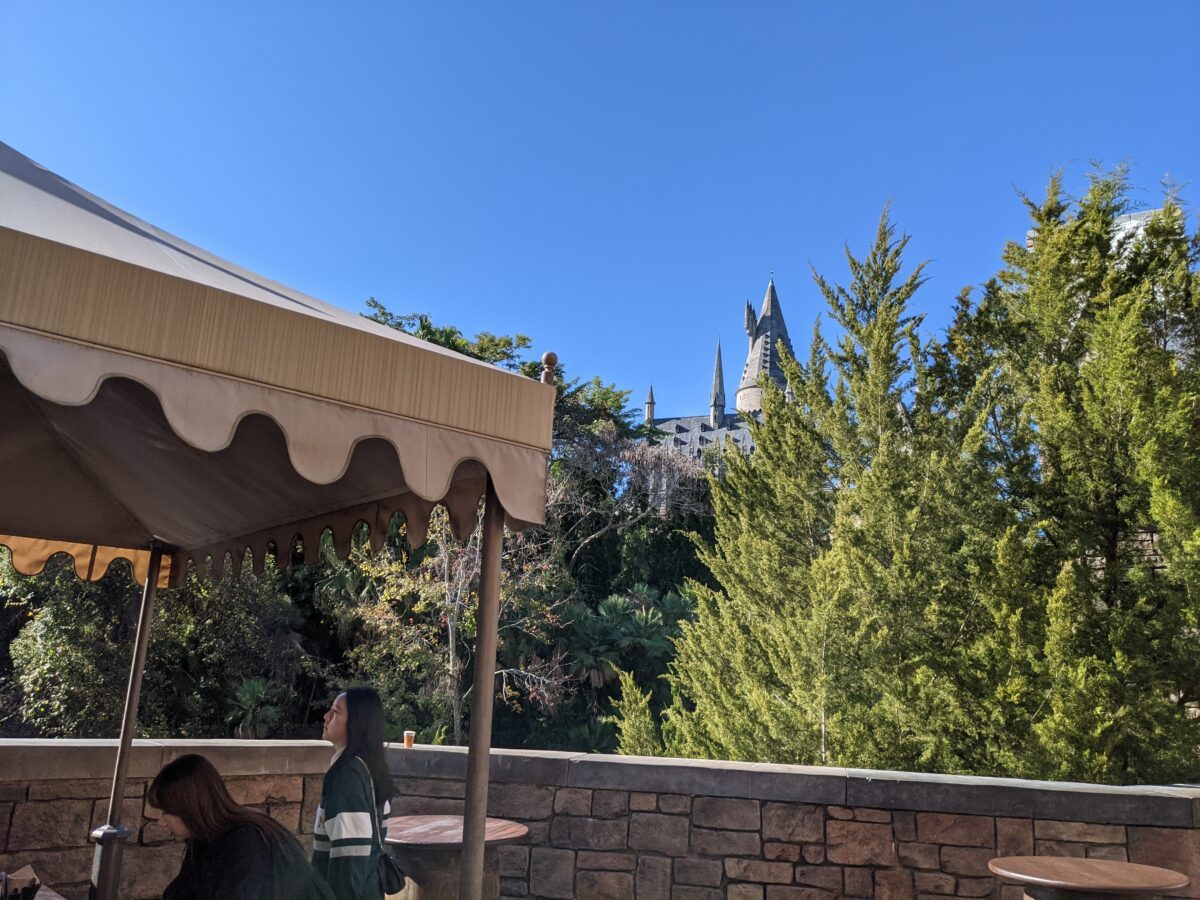 It’s a lot of bench seating, and I prefer chairs for back support.  But one thing I really like about the seating outdoors (besides the views) is that is covered, which is good in case it rains.  It also makes it cooler in the summer. 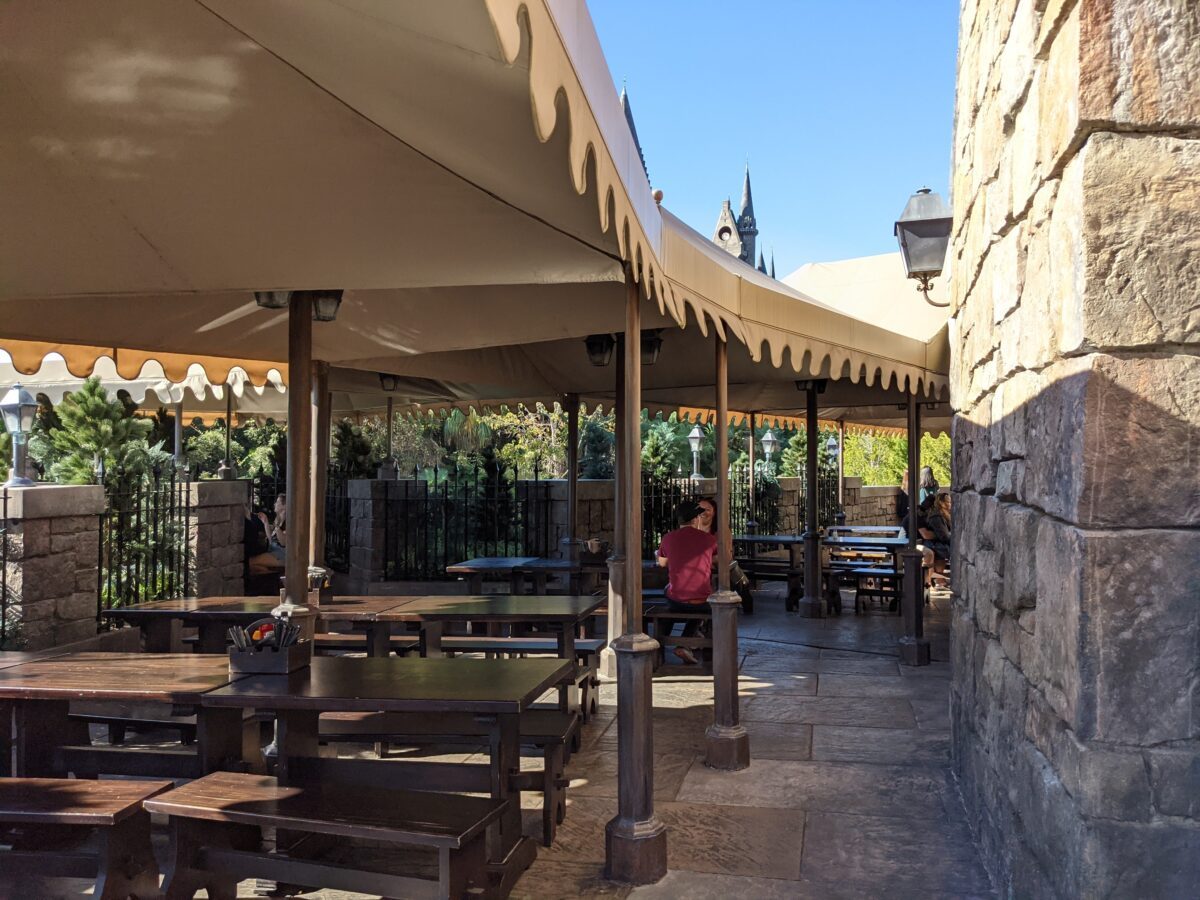 Another fun thing about eating outside is that, depending on where you sit, you could also see a roller coaster go by!  The Velocicoaster is right by, so it’s fun to see and hear it go by.

But if you are concerned that the Velocicoaster kind of takes you out of that Harry Potter immersive experience, then you might want to eat inside where you really do feel like you’re part of the Harry Potter universe. 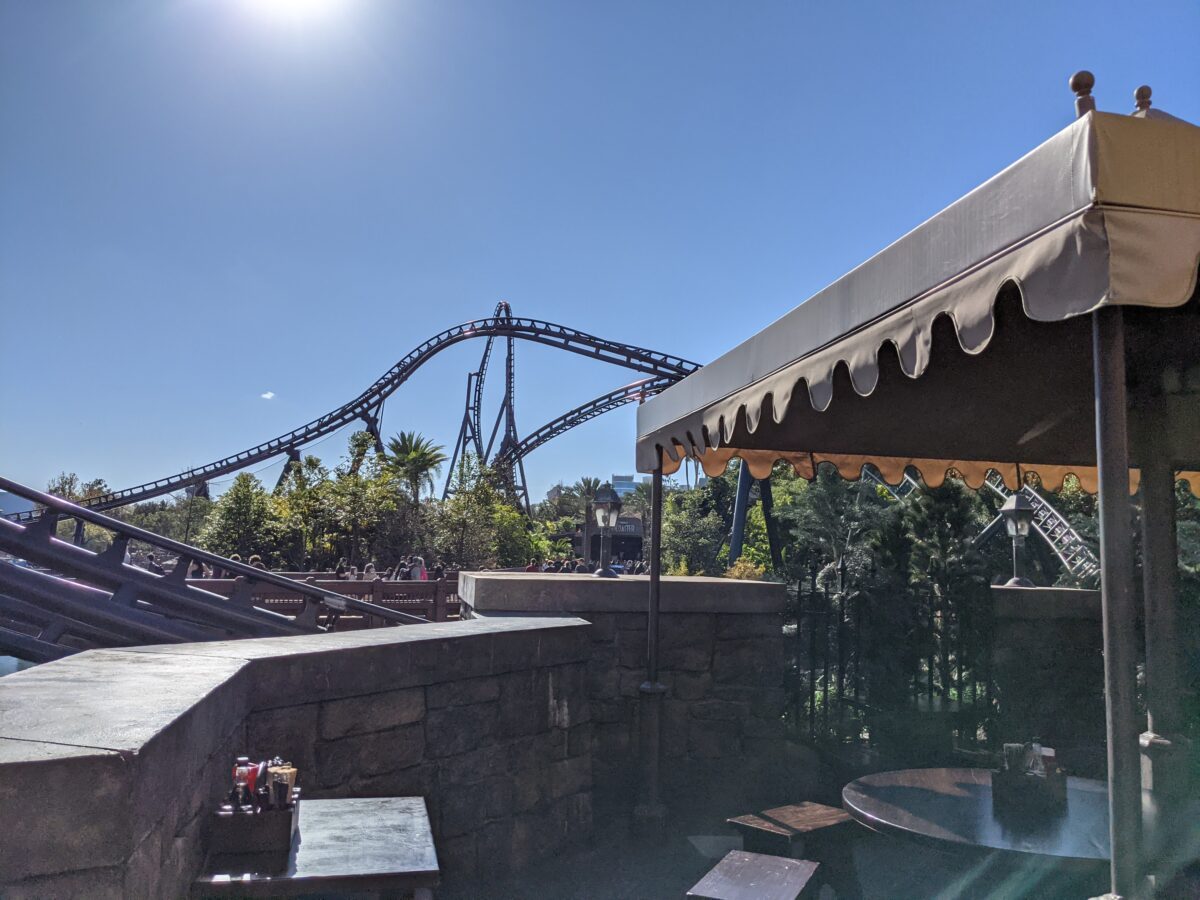 So almost everyone in my family ordered the Pancake Breakfast.  It comes with three pancakes, bacon, link sausage, and a croissant with butter.

Then we had one order of an American Breakfast.  This meal comes with scrambled eggs, bacon, breakfast potatoes, link sausage, and a butter croissant. 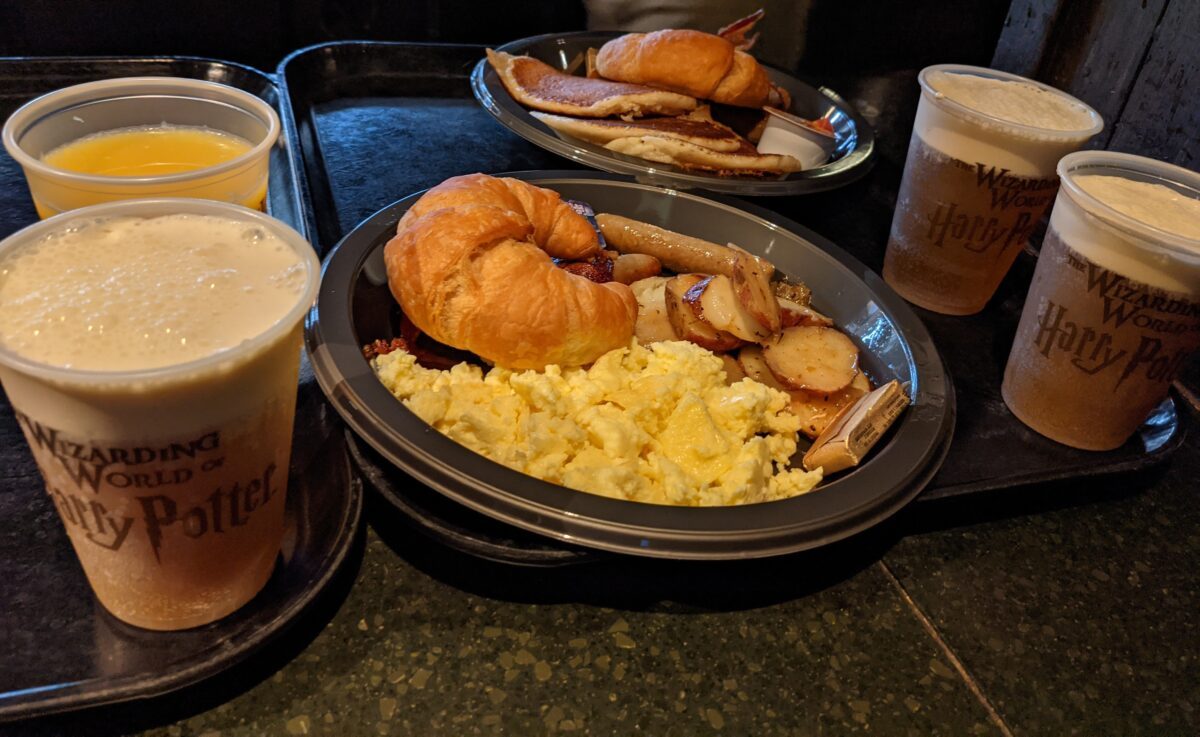 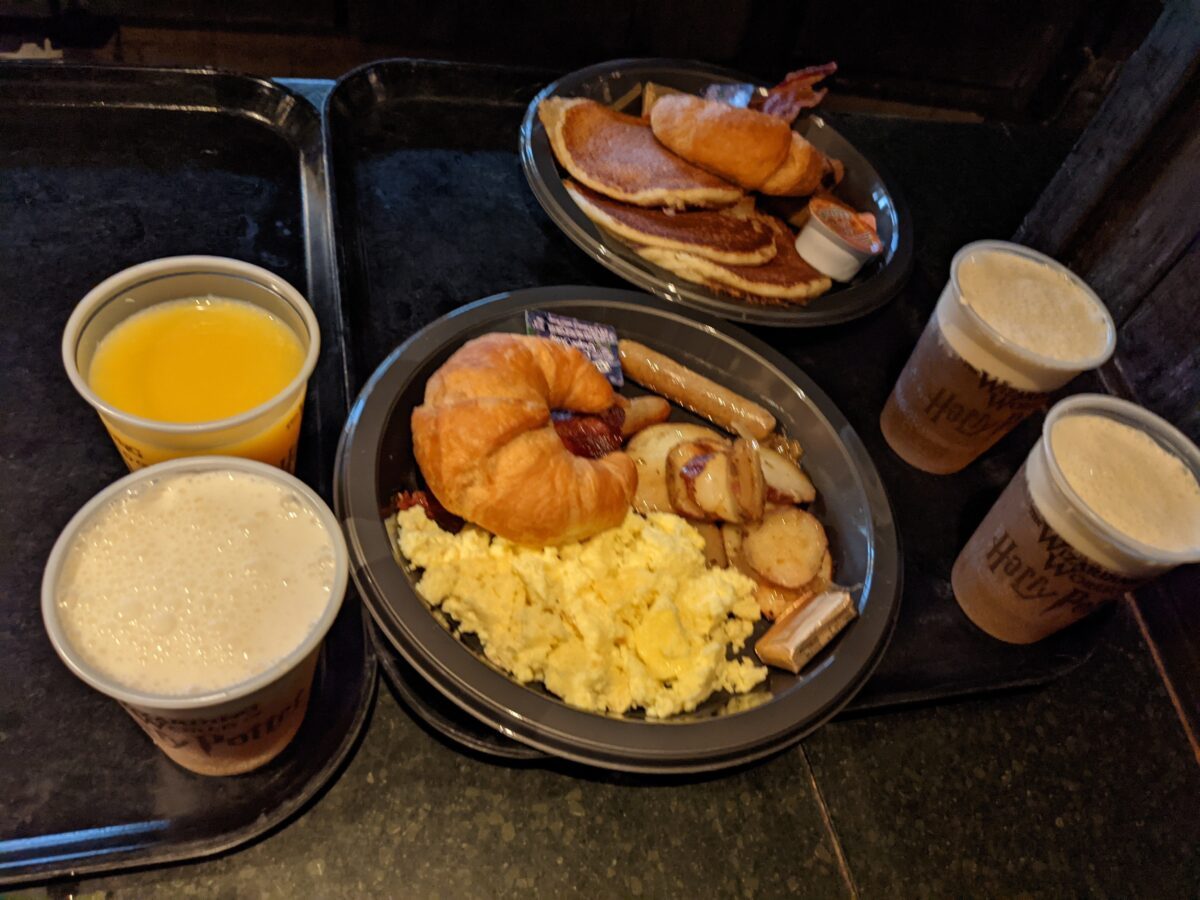 So I definitely enjoyed this meal.  The pancakes especially were delicious.

But here’s the negative of my meal.  They had one pancake meal and one American breakfast menu ready.  But we had to wait for the rest of the pancakes.

As a result, the eggs in the American Breakfast were cold.  Which did hurt the quality of the food.

Now, this did not make the meal bad.  Not by a long shot.  The food was better than when I had breakfast at Dockside Inn at Universal before.

But the quality of the food was not as good as it had been when I went to Leaky Cauldron for breakfast.

Having said this, though, the entire breakfast was overall incredibly enjoyable.  The food was still good and the immersive experience was wonderful.  So I would definitely want to come back here.

Oh, and I almost forgot the drinks!  While there was an orange juice order, most of my table ordered the butterbeer.  Ever since I had my first butterbeer at Leaky Cauldron, I have been wanting another butterbeer.  And this butterbeer did not disappoint!  I drank every drop!  It was definitely a great addition to the breakfast.

You can get discounted tickets that can cover you for both parks by clicking here.