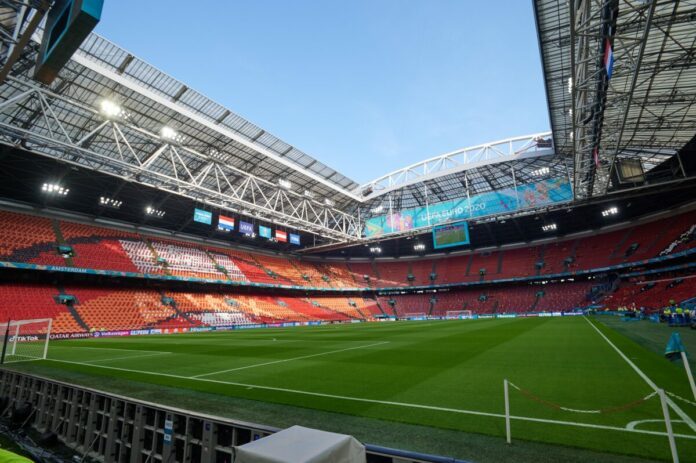 No visit to Amsterdam in the Netherlands is truly complete without touring Ajax Stadium, home of AFC Ajax.

This is a 75-minute guided tour of the Amsterdam Johan Cruijff ArenA.  This is where (or Amsterdamsche Football Club Ajax) play their matches.  It is also the sight of a lot of popular concerts.  The Rolling Stones, Madonna, and One Direction, for example, have all played here.

But I suspect you want to take the tour to see where the AFC Ajax play.  And there’s nothing quite like actually taking the field of a storied franchise like the AFC Ajax.

You may not get to see an actual match or catch the screaming fans in the stands.  But in some respects, this is better.

It is a wonderful way for you to get up a wonderful understanding of the inner workings of the largest football stadium in the Netherlands.  You get to hear behind-the-scene stories of Ajax and the Johan Cruijff ArenA.  Tours are given in both Dutch and English.

And you get to stand pitch-side and literally smell the grass.  You can also get behind the microphone in the press room.  You feel surrounded by this season’s players at the “Meet the team” photo wall.  And you get to see the new dug-out and business seats.

Trust me, if you’ve never done a stadium tour before, you will love this.  It makes watching future games all the more special.  It is a definite must-do for any fans.

Looking to save money on this tour?  Click here and you can automatically save 11% on admission to the tour.  And since the saving is automatic, that makes this coupon even better than a promo code.  Because you don’t have to bother entering in a promo code or discount code!

Johan Cruijff is a football legend who was born and raised in Amsterdam.  He got his start with the Ajax Academy.  He made his debut on the team at the age of seventeen years old and he scored in his first professional game.

But that was just the beginning of an amazing and illustrious football career.  He is now a GOAT if you will.  One of the winningest players and coaches of all time.

But beyond just winning, his approach to the game (referred to as “total football”) has fundamentally changed how football is played at the highest level.  He shaped football into a “beautiful game”.  And now you can visit the stadium named after him to pay your respects to a GOAT.

Save 30% Off Luxury Hotels

Win A Trip To South Dakota

Win a Trip to Monaco

This is Holland Promo Code