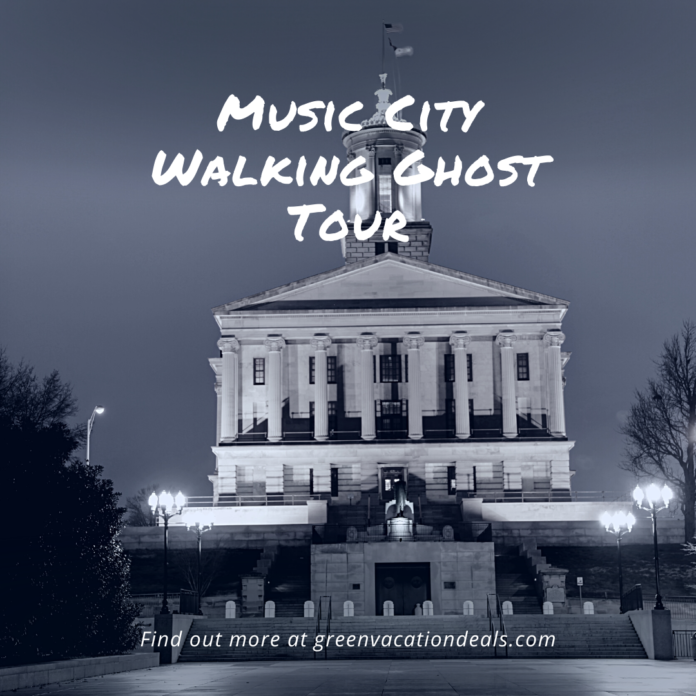 Nashville is a beautiful city and a major center for the music industry. But Nashville has a darker past. A cholera epidemic swept through the city in 1849 with high fatalities. The Battle of Nashville in 1864 was a Union victory. The Music City has a long history, some of it unfortunate and dark, with murders, fires, hangings and more.

So it is not surprising that so many lost souls are restless and still roam the streets at night. Spirits are said to lurk around corners and in alleyways. Shadows suddenly appear and objects move by themselves. Bright orbs appear in photos but are not visible to people.

Take a 90 minute tour of downtown Nashville and explore the scary though fascinating paranormal happenings in the city. Learn about brutal murders and see where they happened. Any fan of true crime or paranormal events will love this tour.

Your tour will begin at the Tennessee State Capitol. When the Capitol’s architect died, he requested to be buried in the northeast corner of the Capitol. His worst enemy was the chairman of the Capitol Commission who was later buried in that corner of the capitol. They could never agree in life and apparently the same is true in the afterlife. It is said that their arguing begins at 9 pm and gets louder as it gets later.

Your knowledgeable guide will tell you about that and the beautiful woman dressed in an antebellum era dress who strolls the grounds at night. Some believe it is the apparition of Rachel Jackson, wife of President Andrew Jackson.

President James K. Polk and his wife are buried in the Capitol grounds. A man in a dark suit has been seen kneeling at their gravesite. When people get close, the man slowly disappears. Many believe the man is President Polk.

A Confederate soldier is believed to inhabit the cupola on the top of the Capitol. A dark, musty figure dressed in a Confederate army uniform has been seen in the cupola.

The historic Ryman Auditorium began as the Union Gospel Tabernacle financed by Captain Thomas Ryman. It later became a live performance venue and was home to the Grand Ole Opry from 1943 to 1974. Captain Ryman’s spirit is said to disrupt performances he feels are risque.

The Opry Curse was first whispered about when the Grand Ole Opry was at Ryman Auditorium. It was said the stage was cursed because so many singers that performed at Ryman Auditorium died. 37 performers died in gruesome ways, including OD’s, fires, car wrecks and more. Victims believed to have succumbed to the curse include Texas Ruby, Stringbean Akeman, Patsy Cline and Hank Williams, Jr. Your guide can tell you more about the curse, its victims, the “Grey Man” and “The Lady.”

This is the only Adults Only ghost tour in Nashville. You’ll hear about murderers and their victims and the mob. Learn about Nashville’s first brothel and the horrors that were involved. Visit the Ernest Tubb Record Shop and hear about its dark past as a Civil War hospital.

You’ll walk into dark alleys at night where ghosts are often seen. Be sure to bring a camera. You never know what you might capture. Get up close and personal with locations that are known for having paranormal activity. The tour is not scary but it’s definitely not for the faint of heart.