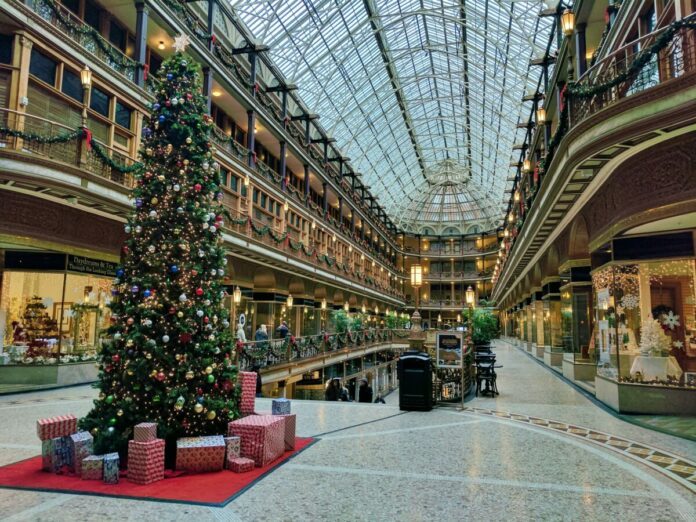 Cleveland shines brightly during the holiday season and you can see it for yourself on the Christmas Walking Tour of Downtown Cleveland. You’ll hear about the history of some of Cleveland’s downtown department stores and their many Christmas traditions.

Your tour will begin on Rockwell Avenue. You’ll meet your guide at the statue of Mayor Tom Johnson on the north side of Public Square. See downtown Cleveland beautifully decorated for Christmas. Public Square is well lit with about half a million lights. Take in the seasonal beauty.

As you walk around the square, your knowledgeable guide will tell you about Higbee’s Department Store. It was the first department store in Cleveland, opening in 1931. Higbee’s was the stage for three scenes In “A Christmas Story:” Ralphie first seeing the BB gun, the parade and the scene with Santa Claus.

The Twigbee Shop inside Higbee’s is where young children could buy small gifts for others with the help of elves. Bruce the Spruce, a talking Christmas tree, kept everyone entertained.

You’ll go into the Arcade which is all decked out for the holidays. Built in 1890, it is the largest of the old Arcades still left in Cleveland.

Your tour will take you to the Halle Building. You’ll hear about the grand department store, Halles Bros. Cleveland’s most famous Christmas character is Mr. Jingeling, “The Keeper of the Keys.” He was one of Santa’s elves. Children were taken to the 7th floor of Halles Bros each December to see Mr. Jingeling and his large ring of keys.

You’ll hear about the Sterling Lindner famous Christmas trees. Your last stop will be at Playhouse Square. You’ll learn about some of their Christmas productions. Opened in 1921, the State Theater is said to have the longest theater lobby in the world.

This tour will give you a great mix of history, fun, Christmas traditions and a large dose of happy holiday spirit.

10 Reasons to Stay 10 Ways to Save Mankato Downtown Hotel