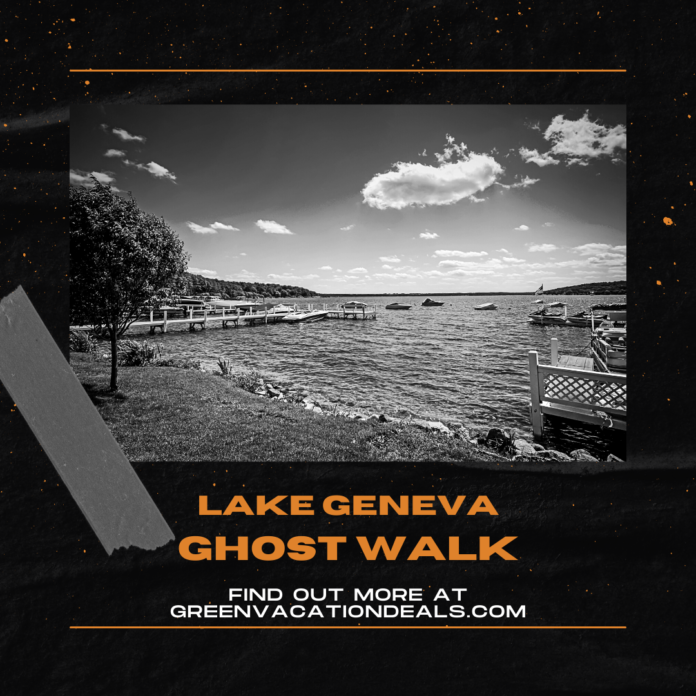 A resort city on Geneva Lake, Lake Geneva is located in southwestern Wisconsin. Lake Geneva is known for its lovely beaches, scenic beauty, historic mansions and luxury resorts. After the Civil War, people started calling it the “Newport of the West.”

Discover the dark side of this beautiful city on the Lake Geneva Ghost Walk, an hour and a half walking tour. Explore the downtown by Geneva Lake. Hear tales of haunted mansions, lake monsters, colorful characters and vengeful spirits.

In 1892, a man and 2 boys reported seeing a sea serpent in Geneva Lake. They described it as being 65 feet long and 3 feet at its widest point. It was said to have a monstrous head with fierce looking eyes and a mouth with rows of sharp teeth.

From 1892 to 1902, this lake monster was seen by many Lake Geneva residents. They named it “Jenny.” You’ll learn more about this USO – Unidentified Swimming Object – on this tour.

The Maxwell Mansion was built in 1856 and used as a residence for decades. The basement of the house was used as a speakeasy in the Roaring Twenties. Later it became a hotel.

Hotel guests and staff have reported phenomena for which there is no reasonable explanation. A supernatural being called “The Watcher” has been seen sitting and watching the hotel guests. A little boy named “Eddie” is believed to be inhabiting the attic. People have reported hearing cries for help from the lobby when no one was there.

Inside the hotel’s tavern (which was the speakeasy), mugs hanging on the wall have been known to fly off the wall by themselves, crashing to the floor. A cash register in the tavern once kept ringing up a charge for a Bloody Mary over and over on its own.

In 2020, the Wisconsin Paranormal Research’s investigators spent five hours at night investigating the mansion when the building was empty. The team recorded voices, heard foot steps and observed strange lights and orbs. Most of the paranormal activity was in the speakeasy tavern and in the Cognac Room on the first floor.

Your knowledgeable guide will be dressed in Victorian clothing. The stories you hear will be informative as well as entertaining. Listen to chilling tales of the ghosts of the lake and Native American legends.

You’ll walk around a beautiful lake and see stunning architecture. Your guide will tell you about each site and the history behind it. If you’re interested in the paranormal and history, you’ll love this tour.

Win A Trip To Paris To See The French Open

Discounted Rates On Hotels On The Florida Keys