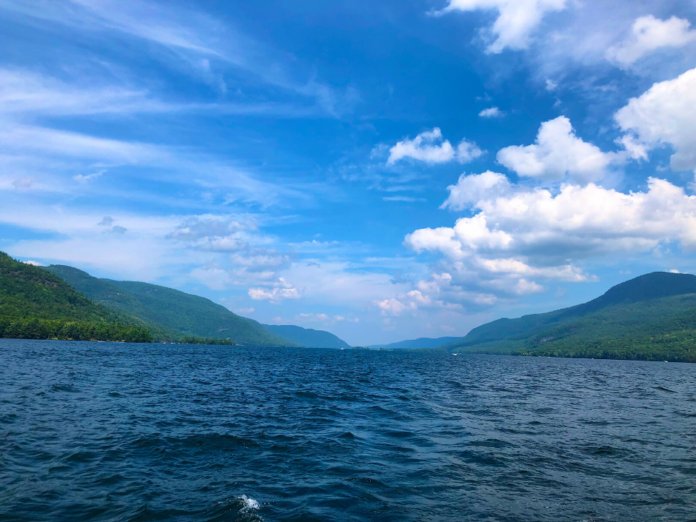 Lake George has been called the “Queen of American Lakes.”  In 1781, Thomas Jefferson wrote in a letter, “Lake George is without comparison the most beautiful water I ever saw.”

Lake George is a long narrow lake at the base of the Adirondack Mountains.  Lying halfway between Montreal and New York City, the lake is 32 miles long and varies from 1 to 3 miles wide.

The first people to live around the lake were Native Americans.  In 1755, William Johnson led British forces to occupy the area during the French & Indian War and he named it Lake George after King George II.  Johnson had a fort built there named Fort William Henry.

The French then built Fort Ticonderoga on Lake Champlain.  In 1757, the French overran Fort William Henry.  As the British retreated, they were ambushed and killed by Native American allies of the French.  Between 200-1500 British and Colonial soldiers, women and children died.  This became known as The Massacre of Fort William Henry.

Lake George’s key position on the Montreal/New York City water route made the position of both forts in the Revolutionary War crucial.

In the late 19th century, Lake George began attracting the wealthiest families.  Members of the Rockefeller, Vanderbilt, and Roosevelt families summered there.

Today in the summer, the population of Lake George is increased by over 50,000 visitors coming to enjoy the lake.  Boating is very popular as is water skiing, wakeboarding, and tubing.

Many come to Lake George for the natural unspoiled beauty of its forests and mountains.  There are hundreds of miles of hiking and walking trails to explore.  Golfers can hit the links and cyclists can have fun on the biking trails.

Enjoy a scenic cruise through the beautiful bays of Lake George.

In the winter, crosscountry skiing, snowboarding, snowshoeing and snow tubing.

Snowmobilers can choose from four different trails.  Ice skaters can glide on the ice and anglers can ice fish.  So much to do and so many choices!

Lake George is a place of unparalleled beauty but it is also the scene of a horrific massacre, bloody battlefields and other dark events.  These tragic occurrences have left behind restless spirits.

Given its violent history, it shouldn’t come as a surprise that Fort William Henry has been the site of paranormal activity.  There is the Limper whose uneven footsteps have been heard all over the Fort.  In the 1950s, a skeleton with an amputated leg was unearthed.  Another spirit is called the Slammer for slamming doors in visitors’ faces.  Many have heard a disembodied voice telling them to “leave the powder magazine.”  Orbs, flashing lights and colored streaks have been witnessed and photographed.  Paranormal activity was documented by SyFy’s Ghost Hunters.  The hauntings have been featured in Glory Haunt Hounds, Para X Radio and Beyond Ghosts.

There is a “mystery spot” on a circular platform in Mayor Blais Park in Lake George Village.  Legend has it that this is the place where a Native American go shouted his wisdom to the lake and mountains.  Stand in the center and speak out loud and your voice will come back to you louder.  Scientists have not been able to explain this auditory phenomenon.

If you’d like to visit Lake George and do it in style, you should consider the following hotels.  They were rated as the top luxury hotels by Expedia.  And you can use Expedia to find the best prices for these hotels.

If you’d like to read more about paranormal activity in the Adirondacks, try these books.

Save on Vacation Packages to Cancun from Los Angeles