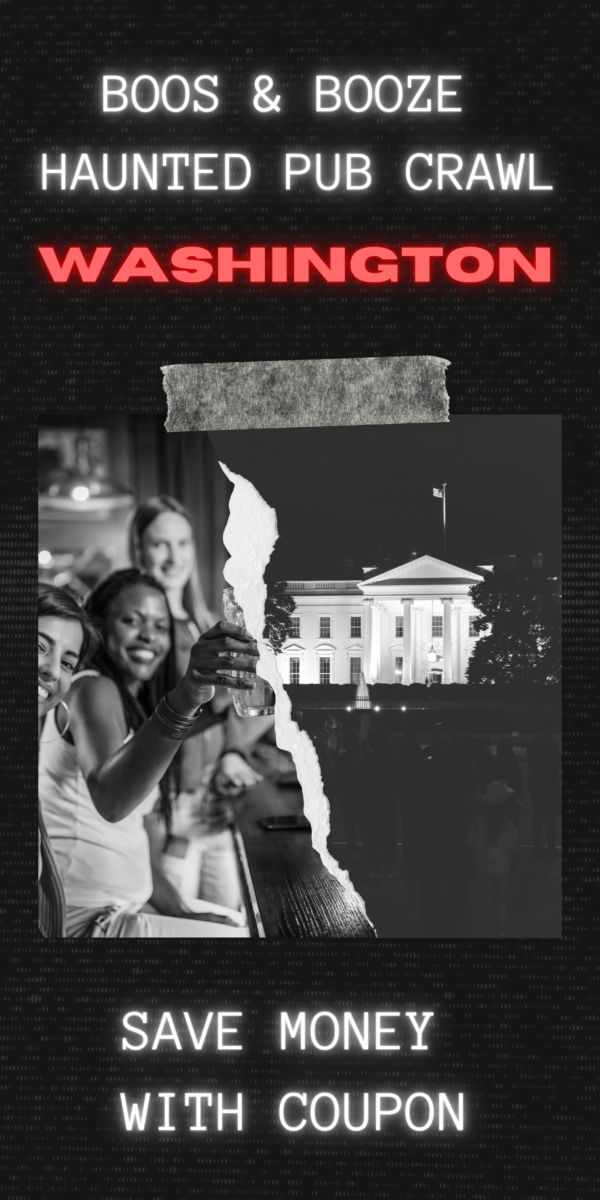 Learn about the dark side of Washington, D.C., as you drink your way through our nation’s capital. If that sounds like fun, then we have the perfect tour for you.

Founded on July 16, 1790, Washington has a unique and historical place among American cities. Most cities have ghosts, but in the nation’s capital, their apparitions have many names that we all know.

The Boos & Booze Haunted Pub Crawl will take you to historic haunts and ghostly pubs. On this 2 ½ hour walking tour, your guide will tell you about Washington’s past and its people, from Presidents to Congressmen to ghostly spirits. Along the way, you’ll stop at four haunted pubs and can have a cocktail or mocktail at each (own expense).

You’ll go to Lafayette Square. Located behind the White House, locals have called it “Tragedy Square” as so many turbulent events have occurred on these seven acres. In 1859, a Congressman and notorious womanizer, David Sickles shot and killed Philip Scott Key, son of Francis Scott Key, for having an affair with his wife.

President Harry Truman once described the White House as being “haunted, sure as shootin.’ ” Listen to stories of America’s most famous ghost, Abraham Lincoln and how many families and people have seen his apparition. Hear stories of other spirits including Dolly Madison, Thomas Jefferson playing the violin, Willie Lincoln, Abigail Adams, Andrew Jackson cursing, a British soldier from the War of 1812 and more.

You’ll visit the Round Robin Bar in the Willard Hotel where Henry Clay enjoyed his Mint Juleps after a hard day of legislating. There have been sightings of President Ulysses Grant’s spirit in the bar.

At the Hamilton, you might see the Man in the Green Hat. He was Congress’ go to bootlegger during Prohibition.

Hear about the historical Rhodes Tavern and the reported sightings of Mark Twain’s apparition.

You’ll go to the Occidental Grill where many political deals have been made and several lingering spirits refuse to leave.

Hear tales of the jealous actor who was murdered in the National Theatre and who has been seen repeatedly in the theatre for over 150 years.

You’ll listen to stories of black cats roaming the streets in D.C. Hear tales of attempted assassination, duels, suicides, betrayals, murders and more. Learn about phenomena that have no reasonable explanations. You’ll learn about the history of our nation’s capital in a very interesting way.

Are you looking for a way to save money on this tour? Click here and you can save $3.40 (10% discount) on each ticket.

Save on Aladdin in Durham NC